Saint Methodius, Patriarch of Constantinople towards the middle of the ninth century, wrote a life of Saint Nicholas in which he declares that “up to the present the life of the distinguished shepherd has been unknown to the majority of the faithful.” Nearly five hundred years had passed since the death of the good St. Nicholas, and Methodius’ account, therefore, had to be based more on legend than actual fact.

He is one of the greatest Church Fathers, a saint honored by both the Greeks and the Latins on the 6th of December. 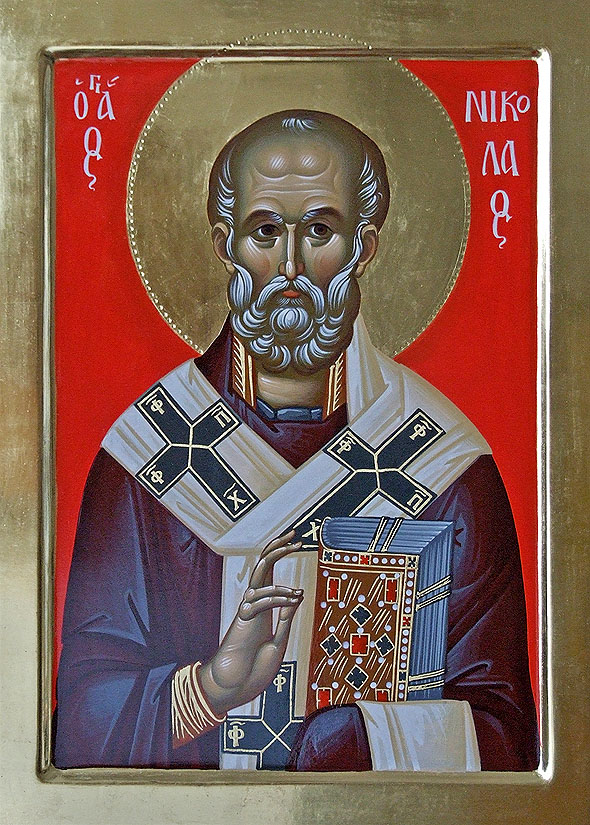 Nicholas was born in Asia Minor Asia near the city of Myra. The date of his birth is not known. Pious and inclined to silence, he was educated in theology and, while still young, was ordained priest by his uncle, Bishop Nicholas of Patara. Having inherited his parents’ estate, he resolved to use for works of charity. A citizen of Patara had lost all his money and his three daughters could not find husbands because of their poverty. In despair their wretched father was about to commit them to a life of shame. When Nicholas heard of this, he took a bag of gold and at night tossed it through an open window of the man’s house. Here was a dowry for the eldest girl, and she was quickly married. Nicholas did the same for the second and then for the third daughter, he became known for his generous gifts to those in need. As a youth, he made pilgrimages to Palestine and Egypt. After the death of of Archibishop John of Myra, he was elected in his place when an Angel made known to the Synod of Bishops that they should choose him. He was subsequently consecrated Archbishop of Myra as the fourth century began. He was imprisoned during the persecutions of Diocletian and released by Constantine after his ascension to emperor. Some twenty years after this he appeared at the Council of Nicaea, to join in the condemnation of Arianism. Arius and only one other bishop disagreed with the general consent that Jesus was ‘of one essence’ with the Father. Nicholas was so incensed with the heretical view of Arius, so legend has it, that he slapped him round the face! Although, Nicholas was noted for his defense of Orthodoxy against the Arians, his name does not appear among any documents from that era.

The traditions all agree that Nicholas was buried in his episcopal city of Myra. By the time of Justinian, some two centuries later, his feast was celebrated and there was a church built over his tomb. The ruins of this domed basilica, which stood in the plain where the city was built, were excavated in the nineteenth century. The tremendous popularity of the saint is indicated by an anonymous writer of the tenth century who declares: “The West as well as the East acclaims and glorifies him. Wherever there are people, in the country and the town, in the villages, in the isles, in the farthest parts of the earth, his name is revered and churches are erected in his honor.” In 1034 Myra was taken by the Saracens. Several Italian cities made plans to get possession of the relics of the famous Nicholas. The citizens of Bari finally in 1087 carried them off from the lawful Greek custodians and their Moslem masters. A new church was quickly built at Bari and Pope Urban II was present at the enshrining of the relics. Devotion to St. Nicholas now increased and many miracles were attributed to his intercession.

Through the centuries many legends of his gift-giving grew and  various stories have been told of St. Nicholas’ life and deeds. These accounts help us understand his extraordinary character and why he is so beloved and revered as protector and helper of those in need.

One of the oldest stories showing St. Nicholas as a protector of children takes place long after his death. The townspeople of Myra were celebrating the good saint on the eve of his feast day when a band of Arab pirates from Crete came into the district. They stole treasures from the Church of Saint Nicholas to take away as booty. As they were leaving town, they snatched a young boy, Basilios, to make into a slave. The emir, or ruler, selected Basilios to be his personal cupbearer, as not knowing the language, Basilios would not understand what the king said to those around him. So, for the next year Basilios waited on the king, bringing his wine in a beautiful golden cup. For Basilios’ parents, devastated at the loss of their only child, the year passed slowly, filled with grief. As the next St. Nicholas’ feast day approached, Basilios’ mother would not join in the festivity, as it was now a day of tragedy. However, she was persuaded to have a simple observance at home—with quiet prayers for Basilios’ safekeeping. Meanwhile, as Basilios was fulfilling his tasks serving the emir, he was suddenly whisked up and away. St. Nicholas appeared to the terrified boy, blessed him, and set him down at his home back in Myra. Imagine the joy and wonderment when Basilios amazingly appeared before his parents, still holding the king’s golden cup. This is the first story told of St. Nicholas protecting children—which became his primary role in the West.

Another story tells of three theological students, travelling on their way to study in Athens. A wicked innkeeper robbed and murdered them, hiding their remains in a large pickling tub. It so happened that Bishop Nicholas, travelling along the same route, stopped at this very inn. In the night he dreamed of the crime, got up, and summoned the innkeeper. As Nicholas prayed earnestly to God the three boys were restored to life and wholeness. In France the story is told of three small children, wandering in their play until lost, lured, and captured by an evil butcher. St. Nicholas appears and appeals to God to return them to life and to their families. And so St. Nicholas is the patron and protector of children.

Several stories tell of Nicholas and the sea. When he was young, Nicholas sought the holy by making a pilgrimage to the Holy Land. There as he walked where Jesus walked, he sought to more deeply experience Jesus’ life, passion, and resurrection. Returning by sea, a mighty storm threatened to wreck the ship. Nicholas calmly prayed. The terrified sailors were amazed when the wind and waves suddenly calmed, sparing them all. And so St. Nicholas is the patron of sailors and voyagers.

Other stories tell of Nicholas saving his people from famine, sparing the lives of those innocently accused, and much more. He did many kind and generous deeds in secret, expecting nothing in return. Within a century of his death he was celebrated as a saint. Today he is venerated in the East as wonder, or miracle worker and in the West as patron of a great variety of persons-children, mariners, bankers, pawn-brokers, scholars, orphans, labourers, travellers, merchants, judges, paupers, marriageable maidens, students, children, sailors, victims of judicial mistakes, captives, perfumers, even thieves and murderers! He is known as the friend and protector of all in trouble or need.

Through these stories, St. Nicholas transformed into the legendary character called Santa Claus, who brings Christmas presents to children around the world.

The familiar images of Santa Claus or Père Noël have obscured the historical Nicholas, Bishop of Myra. Most children receive their presents on Christmas Eve night or early Christmas morning, but in some countries they get their presents on St. Nicholas’ Day, December 6th.

St. Nicholas’ Day will be celebrated in the church of St. Nicholas Orphanos  in Thessaloniki

On the feast day of the Saint Nicholas, on 6 December 2012, His Grace Bishop Dimitrios of Thermon (from Ecumenical Patriarchate) will celebrate the Divine Liturgy in the church of the St. Nicholas Orphanos (the Orphan) in Thessaloniki. The church is located in the northeastern corner of the old city of Thessaloniki, just inside the eastern wall, between the Irodotou and Apostolou Pavlou streets.

The Church of Saint Nicholas Orphanos (the Orphan)

Professor Chrysanthi Mavropoulou-Tsioumi writes about the church “The Church of Saint Nicholas Orphanos is an early 14th-century Byzantine church. Written tradition preserves two names for this church. The older reference (1648) is to the Church of St Nicholas Orphanos, while the later (1754) is to the Church of St. Nicholas ton Orphanon (of the Orphans). Both reference, however, date from much later than the church’s foundation, which goes back to the fourteenth century.

For many years now scholars have been trying to interpret these names and to find out which is the original name. Andreas Xyngopoulos, who has made a study of the monument, believes that the earlier reference give the original name, and he attributes it to a hypothetical founder surnamed Orphanos. In this case the church must originally have been called “Saint Nicholas tou Orphanou” (= of Oprhanos), and with the passage of time the genitive became the nominative form “Orphanos”. However, a more probable explanation is that the church took its name from the fact that St. Nicholas is best known as the patron of widows and orphans.”

Most of the painted decoration in the church’s interior survives and dates from the decade 1310-1320, the time of the most splendid flowering of Palaeologan art in Thessaloniki. The whole of the interior was originally covered with a great variety of iconographical cycles.

The church is most notable for its frescoes, contemporary with the church’s construction, which cover almost the entire interior surface. The frescoes are an example of the Thessalonican school at the height of the “Palaiologan Renaissance” and their creator may be the same who decorated the Hilandar monastery in Mount Athos in 1314. The church has been linked to the Serbian king Stephen Uroš II Milutin (r. 1282–1321), who is known to have sponsored churches in the city, on account of the depiction in the main aisle of St George Gorgos, the Serbian ruler’s patron saint, and of St. Clemens of Ohrid, a favourite motif of the Serbian churches.

It is actually a metochion (dependence) of the Vlatades Monastery in Thessaloniki and it functioned as a church even during the Turkish occupation.