The Birth of Christ: Historical and Theological Facts and how they have sometimes been Distorted (2)

The Nativity as a Historical Event
There is absolutely no suggestion in the New Testament that Jesus Christ is an idea or that His Birth is the incarnation of an idea. On the contrary, the claim is made that He is a specific historical person, Who was born and lived in a particular place and time and Who is linked to other historical personages and to the events of His era.

In order to emphasize precisely this, the holy Evangelists quote the genealogies of His lineage, that is the successive births which prove His descent, as a human being, from the line of David and Abraham (Matth. 1, 1-16; Luke 3, 24-38). The Gospel writers make the point that the Birth of Christ had been foretold in the Old Testament by the great prophets, many centuries earlier and was something to be expected. The first ‘prophecy’ in this regard was given by God Himself, immediately after the Fall of the First-Created. According to this, someone of the woman’s seed (i.e. someone born of a woman) would crush the head of the serpent/devil. (Gen. 3, 15). The great prophets saw events related to the Nativity: that Christ would be born of a virgin (Is. 7, 14); that He would be called Emmanuel (God) (Is. 7, 14); that He would be born in Bethlehem (Mic. 5, 2); that He’d be called a Nazarene (Matth. 2, 23). They’d also seen the veneration of the Magi (Ps. 71, 10-11; Ps. 60, 6) and the return from Egypt (Hos. 11, 1), as well as the mourning over the slaughter of the innocents (Jer. 38, 15). 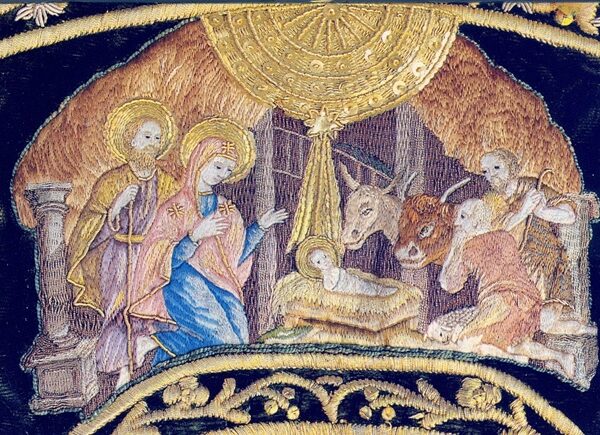 Despite their emphasis on the historical Nativity and lineage of Christ, the Evangelists don’t deny His pre-existence as God, nor do they believe that His existence began with His conception in the womb of Mary. On the contrary, they stress that He pre-existed as God, as the Son of God, and that in the fulness of time, He became human for our salvation (Gal. 4, 4), though not, of course, ceasing to be God. What began with His Nativity was His human existence, which He ‘took upon’ Himself from the Virgin Mary, given that Christ unified in His person two perfect natures, the divine and the human, in a way that’s paradoxical for us. The New Testament emphasizes that the human nature of Christ is historical, real, and the same as our own. In other words, Christ didn’t come into the world ‘by imagination’, but that He really did become a, actual human person. When Saint John the Evangelist says ‘the Word became flesh’ (Jn. 1, 14), he didn’t mean that some abstract discourse or idea became incarnate, as some of the philosophers and religious systems of his era would have had it, but that the Word of God, Who has a specific mode of being, Who has a separate existence, took human form. This Word, Who is one and the same as ‘the only-begotten son who dwells in the bosom of the father (Jn. 1, 18), eternally preexisted every creation of God (‘in the beginning was the word’, Jn. 1,1 ). He is God (‘and God was the Word’, Jn. 1,1), in exactly the same way as His Father is.

By placing the Nativity in its local and temporal context, the holy Evangelists emphasize the fact that Jesus Christ was born in Bethlehem of Judah (Matth. 2,1), at the time when Herod was king (Matth. 2, 1), when the governor of Syria was Quirinius (Luke, 2, 2) and during the reign of the Roman Emperor Caesar Augustus (Luke 2, 1). Indeed, this information is available because of the general census ordered by Augustus covering the whole of the empire: ‘In those days Caesar Augustus issued a decree that a census should be taken of the entire Roman world. This was the first census that took place while Quirinius was governor of Syria’ (Luke 2, 1-2). These people and events are historical facts. Octavian Augustus was emperor between 31 B.C. and 14 A. D. Herod ‘the Great’ was king in Judea (a client state of Rome) during the period from 37 B.C. to 4 B.C. His violent character is confirmed by sources outside the Bible. He had a succession of ten wives, by whom he had many children, a good number of whom were murdered on his instructions. At one point he executed 45 of the 70 members of the Great Sanhedrin, that is almost the whole of spiritual, economic and political leadership of the Jews. If you know how many of his own family, particularly how many of his own children he had put to death, you won’t be surprised by the New Testament account of the slaughter of the innocents in Bethlehem. The governorship of Quirinius is confirmed by the Jewish historian Josephus (Jewish Antiquities, XIII, 1-2), while the tactic of frequent censuses within the empire is confirmed by many sources outside the Bible.

On the basis of this and other data, the year of the Christ’s Birth can be determined with some accuracy. The best known attempt in the past was made by the monk Dionysius Exiguus in 562 in Rome, which was based on the chronological system of the time. Before than, a variety of chronological systems had been in use, but, when Christianity became prevalent it was felt that a system of time should be used which had its starting-point as the Birth of Christ, in order to reflect the sense that His coming divided the world into the era before the event and the age thereafter. Today we know that Dionysius’ calculations and the data of that period were erroneous. According to the best modern calculations, the precise time of the Birth of Christ was a little before 4 B.C.