On 9 December we celebrate the conception by Saint Ann, that is the day when she became pregnant with the Mother of the whole world, Our Most Holy Lady. Although there’s no reference to the person of Saint Ann, the mother of the Mother of God, in any of the books of the New Testament, she nevertheless occupies a prominent place in the religious devotion of the Church. 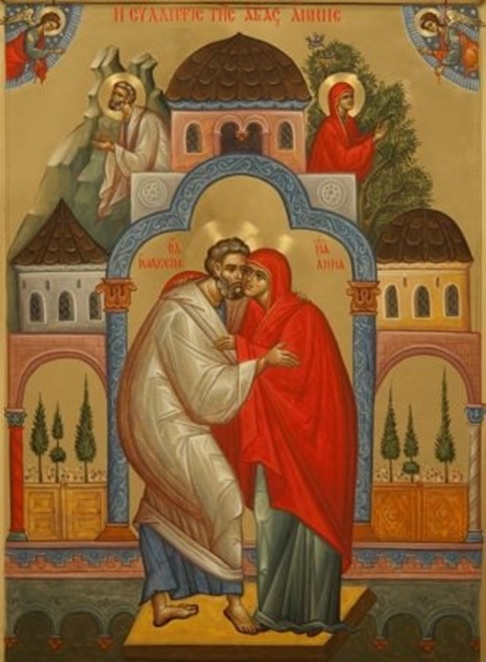 The name ‘Ann’ (Anne, Anna) comes from the Hebrew ‘Hannah’ and means ‘favor, grace’. A woman in whom the grace and benevolence of God has been shown. She belonged to the tribe of Levi [1]. Her father was Matthan, a priest who served at the time of Cleopatra and Shapur, king of the Persians. Her mother was called Maria and she had two sisters, Maria [2] and Sobe [3]. In Galilee, Saint Ann married Joachim, who was of the tribe of Judah [4] and they had one child, Maria, who bore the Son and Word of God.

At first the couple had no children. But with prayer, faith, patience and adherence to God’s will, Ann was able to become pregnant late in life, and the ‘couple conceived the sacred [child], the divine heifer…’ [5]. Ann made a pledge to God ‘to bring you the infant you bestowed’. In other words, if God enabled her to become a mother, she and Joachim would dedicate the child to him.

Once Saint Ann had weaned her all-holy daughter, she dedicated her to the Temple of God, at the age of only three years old, as a pledge and gift to God, who had given her to them. Thereafter, their ways parted. Joachim and Ann lived out the rest of their few remaining years in peace, entirely devoted to the worship of God, prayer, fasting and alms-giving.

As the dismissal hymn for the saint puts it, ‘today the bonds of barrenness are loosed’ [6]. This is why Saint Ann is the patroness of childless couples. Couples who are having difficulties in having children should therefore ask Saint Ann, patiently and persistently, and their request will be met, provided they’re patient and don’t despair.

Let us entreat Saint Ann to grant us her grace and blessing in abundance.

[1] After the exodus from Egypt, the Levites became a clerical tribe in the desert, according to the book of Numbers (3, 5-10). After the Israelites settled in the land of Canaan, they did not have their own area as a tribe, but lived in various cities, among other tribes (Numbers 35, 1-8; Joshua chap. 21). God gave 48 cities to the Levites, as well as the right to food from offerings to the temple.

[2] Maria married in Bethlehem and gave birth to Salome the midwife.

[3] Sobe married in Bethlehem and gave birth to Elizabeth, the mother of John the Baptist.

[5] Aposticha at Vespers of the feast of the Conception by Saint Ann.

[6] Today, against all hope, the bonds of barrenness are loosed. For God has hearkened to Joachim and Ann, clearly promising that they would bear a godly maiden. He who commanded the angel to cry out to her, ‘Hail, full of grace, the Lord is with you’, was born of her, the infinite one himself, becoming human.

For readers who know Latin, there is a very interesting commentary on the hymns of the Orthodox feast in De Immaculata Deiparae Conceptione, by two monks of the order of Saint Basil at the Monastery of Cryptoferrata, just outside Rome, which was founded in 1004 and celebrated the Greek rite. A free version is available on line. [WJL].