The icon of the Oysterman

In the icon of the Holy Monastery of Stavronikita, there is a mosaic icon of Saint Nicholas, the patron of the monastery, which has an eight-centimeter long vertical split on the forehead. This is from a large mollusk which had embedded itself there during the period when the icon had lain at the bottom of the sea. So the icon gained the appellation ‘Saint Nicholas the Oysterman’. 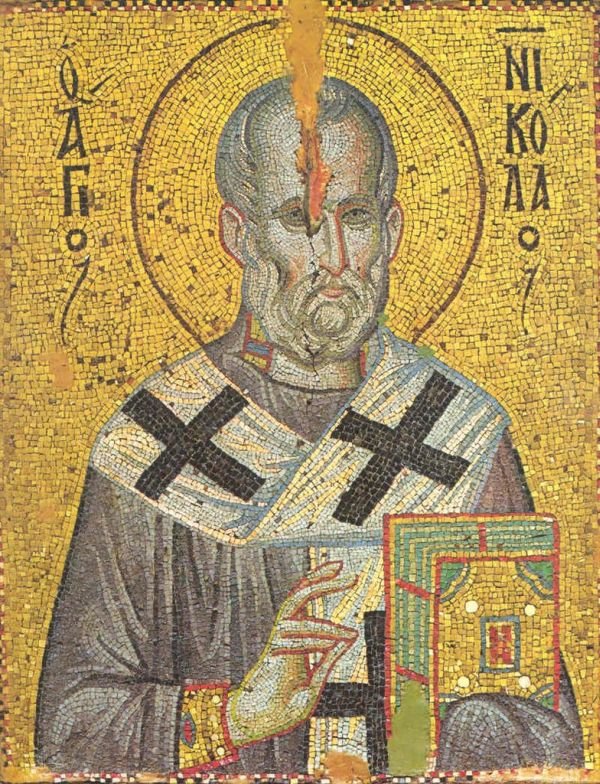 Tradition tells us that ‘it was drawn from the sea by the fishermen of the monastery at the time when it was being re-founded’. This occurred by chance when the nets revealed the shellfish in the forehead of Saint Nicholas. The fishermen attempted carefully to remove the oyster from the saint’s forehead. No sooner had they unstuck it, however, than blood appeared in the wound and it can still be seen to this day, thus confirming the miracle.

Because of this miracle, Patriarch Ieremias proclaimed that the monastery was to celebrate and honor Saint Nicholas as its patron. The shellfish was preserved as a treasure. Half of it is still in the monastery, while the other half, according to tradition, was made into an encolpion as a gift for Patriarch Job of Russia. In all probability, the icon was cast into the depths by Catalan pirates, following a raid they made in 1306. This is confirmed by experts who have dated the fabrication of the icon to the end of the 13th century. It was retrieved in the year 1589, during the reign of Patriarch Ieremias II and therefore spent 283 years at the bottom of sea, intact but for the oyster-shell.

Here we have an unquestionably miraculous event concerning this particular icon of Saint Nicholas. Naturally, there are many other similar miracles regarding our Most Holy Lady and other saints. They bear witness to the fact that God gives his grace to relics of the saints and to their icons. Miracles performed by holy icons occurred in the past. They also occur today. And they will continue to be performed in the future. For ever. Because God is, and will always remain, the same.

People who don’t believe in the miracles of the saints and their icons forget that God is all-powerful and that he acts where he chooses and how he chooses. If you believe in the miracles of the saints performed through their holy relics and icons, but have reservations about whether a particular miracle which you’ve been told about is real or not, that’s not a sin. Because your reservations aren’t aimed at God, but at specific human beings.