The Incarnation in the Trenches

Christmas 1914. The trenches. A different kind of cease-fire

Today we call it the First World War. Then they called it the Great War. Many European countries were involved in it, in a horrendous conflict without any clear ideological stamp. Millions of people were crushed under the mill-stones of two alliances of states. Thousands of people were killed in endless battles of the trenches, which gave it the name of ‘the war of attrition’. Hundreds of thousands of soldiers, stuck fast in the dugouts, quickly passed from the horrors of war to a routine that was utterly boring and had little or no meaning. 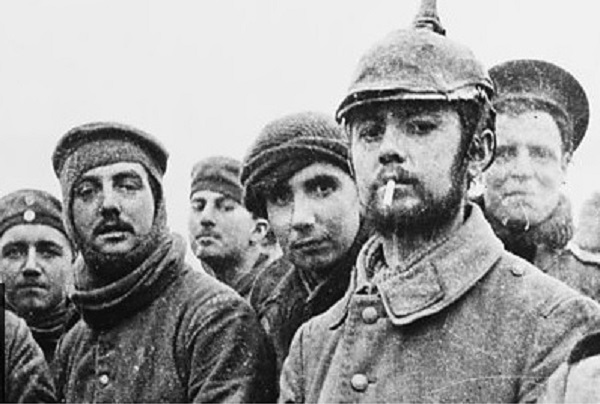 The first Christmas of the War arrived and many people began to believe that it wasn’t going to end any time soon [Initially, the common perception was ‘It’ll all be over by Christmas’.] And this, indeed, was the case: the bloodbath lasted four years in all. It may be that this feast of Christmas was to leave its mark not only on that war but, perhaps on the whole of human history, too. It was, alas, one of the very few moments when people were prepared to stop behaving like beasts and find their humanity again. In other words, that in the absurdity of fratricide, they discovered the purpose for which they’d been made.
On both sides of the hostilities, men were fighting (what irony!) who believed in the same God, the God of peace… And, unfortunately, it wasn’t the first time that this had happened, nor would it be the last. The ‘logical’ thing would have been for the military superiors to agree on some form of cease-fire. However, this was not felt to be advisable. And so the ‘inferiors’ took it upon themselves. The last became the first.

Of course, the signs were there earlier. As some of the participants have testified, on the front in Northern France in particular, there was a feeling that the ‘enemy’ shared the same sentiments: hardships, fear, despair, frustration, and boredom. And from time to time there was a tacit agreement on the part of both sides to stop the bombardments, to arrange brief, unofficial cease-fires to bury the dead (and exchange cigarettes). On these occasions, repairs were made to the redoubts and it was possible to take better care of the wounded. The High Commands were aware of this, of course, and felt distinctly uneasy. This is why they gave strict orders to officers to restrict and forbid any signs of ‘ultimate betrayal’. 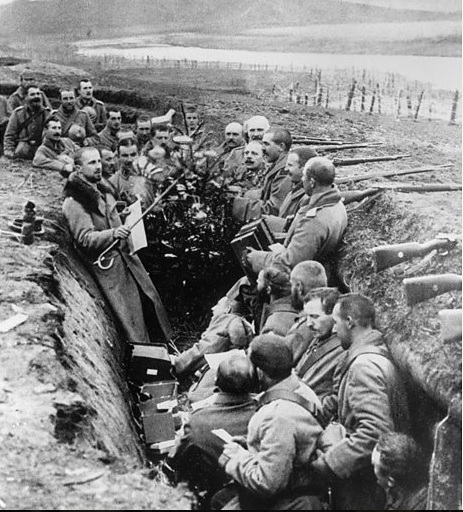 The truth is that in the period in the run-up to Christmas, some particularly devastating battles (such as that on the Ypres salient) gave rise to official cease-fires, so that the dead could be buried. But when, on December 7, Pope Benedict XV called for ‘A Cease-Fire in the Name of God’, the suggestion fell on deaf ears. The ‘warlike spirit’ of the forces had to be maintained. Only small gifts were allowed through to the front from home, in order to raise morale and sprits.

But on that evening, the protagonists briefly changed the course of history and regained their lost humanity. Evidence tends to suggest that it all started from the German lines, when the troops there began to sing carols, and, in particular, ‘Silent Night’ which was written originally in German, but had become well-known in other languages as well. The opposing forces were not exactly far away from each other and the carol-singing of the ‘enemy’ could be heard loud and clear. So it was not long before the other side responded.

‘Silent Night’ rang out in English and French, making it a truly ‘Holy Night’.

Soon each side sang a carol of its own and waited for the others to applaud. This lasted for some time. Soldiers started to wake up comrades who were sleeping. They were overcome with joy and wished everyone to share it.

Things then took a sudden turn, or, perhaps we should say, they immediately returned to normal. 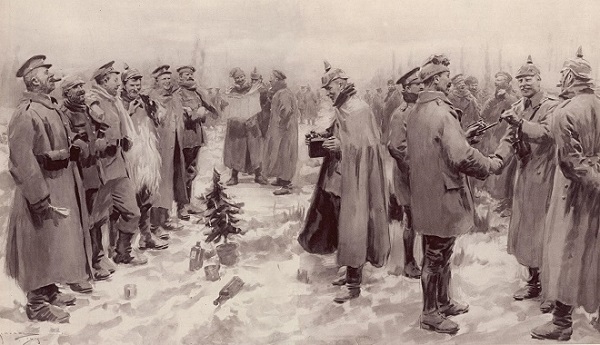 From both sides of the battlefield, men left their dank trenches and hurried out to meet each other in No Man’s Land. In the beginning there were only a few but everyone soon plucked up the courage. The first to take the risk saw that nobody shot at them and, that, on the contrary, they were greeted with handshakes and hugs. They called to their more hesitant comrades to come out as well. There was no need for white flags or anything else of the kind- they had the carols with them. They ‘left the dead to bury their dead’ and went out to encounter Life.

Quite spontaneously they began to exchange presents and sing, arm in arm. When dawn began to break, they posed for photographs. The whole of the next day was spent in drinking together, laughing and, as far as was possible, talking about their families and the war. And they managed to do so. The great things in life don’t need to be translated. It’s been written that they even played a football match, though this can’t actually be confirmed. Perhaps it’s more likely that there would have been some good-natured jostling, which is what men sometimes do when they’re unable to express their happiness properly. It’s also true that this fraternizing was not a general phenomenon. At other places on the front, they continued to exchange fire, rather than gifts.

The news spread quickly. It was certainly not welcome among the generals nor those who continued to see only the enemy across the lines. In other words, it didn’t please ‘the dead’ we mentioned above. Fears increased that there would be a general mutiny, which would empty the trenches and so the threats against those who would attempt anything similar in future were made many times more stark.

It appears that these ploys worked very effectively. The enemy was successfully demonized and any thoughts of fraternization were expunged. The war continued relentlessly and the grim reaper continued to cut down the flower of the youth of Europe and its colonies (for we shouldn’t forget that, in this war, the colonies enjoyed full rights to death).

There was never again a cease-fire from those below- or at least not that we know of. The story was kept alive, however, in the minds and souls of those who experienced it and those whom it touched. And it’s the living proof of God’s incarnation.