The joy of the miracle (10th Sunday of Luke)

The scene described in the Gospel reading for the 10th Sunday of Luke is both moving and revealing, as regards the intentions and sincerity of ordinary people and the attitude of our Lord towards them. Among the crowd, there was a woman of skin and bone. She was doubled over and in pain. She could hear the voice of Jesus, but wasn’t able actually to see him.

Jesus made his way to this tormented woman. When he reached her, he said to her tenderly: ‘Woman, you are freed from your infirmity. Now you’re well’. Power surged through her limbs. Her body regained its strength. There was praise and gratitude in her heart. Wonder, joy and delight. 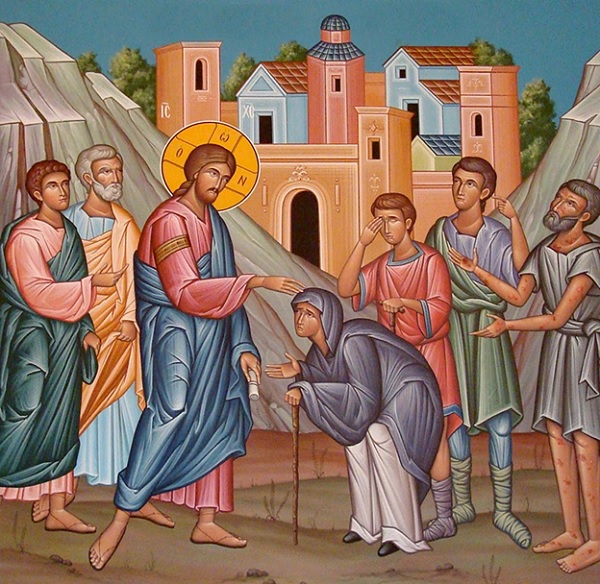 The hypocrisy of the ruler of the synagogue.

But envy and spiritual wickedness cast a pall over the joyful atmosphere. The ruler of the synagogue was indignant because the Lord hadn’t observed the Sabbath as a day of rest. The soul of the ruler of the synagogue was at that moment in thrall to envy, and this impelled him to act in a thoroughly odious way. He wanted to attack Christ, but didn’t have the gall to openly express what was in his soul. So he thought he would use the shadow of the law to mask his unlawful conduct.

The Lord answered the challenge immediately, however, calling the reaction of the ruler of the synagogue hypocrisy and expressing his love for people: ‘You hypocrites! Should not this woman, a daughter of Abraham whom Satan bound for eighteen years, be loosed from this bond on the Sabbath day?’.

As we’ve already said, the ruler of the synagogue cowered behind the commandments of God’s law. But this isn’t the only time that disagreeable people have used the Law and the Gospel in order to further their dubious ambitions and satisfy their secular desires. Egotists use the word of God to promote themselves, and people in the Church who are obstreperous misinterpret it. In fact, there are times when, in order to hide their egotism and willfulness, these people quote words from the Holy Scriptures and Fathers, which they apply circumstantially. In this way, instead of actually conforming to God’s commandments people hide behind them and use them to conceal their personal antipathies. This is how heresies arise, as well as other individual theories and teachings which vex the Church of Christ. When the heart isn’t pure, it can’t interpret the divine word in a proper manner. Because only a clean heart can present the word in a genuine and pure way. It’s only such a heart that can receive and understand it.

What we have to know is that Christ isn’t interested so much in what we do, as much as in the reasons why we do it. Most often, our hostility towards and envy of other people, particularly in the name of Christ, is a pious way of establishing our own authority, and is the result of a lack of self-awareness and real love. When we have self-awareness, we acquire real humility. ‘Solicitousness for others follows humility’, writes Saint Isaac the Syrian. When humility isn’t followed by solicitousness for others,  it’s mere pretense.

The mind of the Law

This is why we should all pursue the cleansing of our heart and should rely on our godly Fathers, who became vessels of the Most Holy Spirit and were enlightened by the Holy Trinity. With this illumination from the Comforter, they interpreted the word of God and Holy Scripture. In this way, we will be taught that we are the ones who can prevent our brothers and sisters from destroying themselves and that we can assist in their transfiguration, by living in the spirit of the law, or, as Saint Athanasios puts it, in the mind of the law.

May the Triune God illumine us so that we can interpret his law in a proper manner and can discover the essence of our faith.