The Vasilopita (VasilOpita) is the main custom in Greece for New year.  It’s one which we encounter throughout Greece, though naturally with local variations. These are mostly to do with the ingredients of the cake. In some places it’s a cake, though there are also parts where it’s a savory or sweet pie, made with phyllo pastry. There even places where it’s a bread. There are also differences in the way the Vasilopita’s decorated.  One common feature, though is that there’s always a cross and a reference to the year. And in all cases, the cake or pie is round and has a coin hidden inside it. 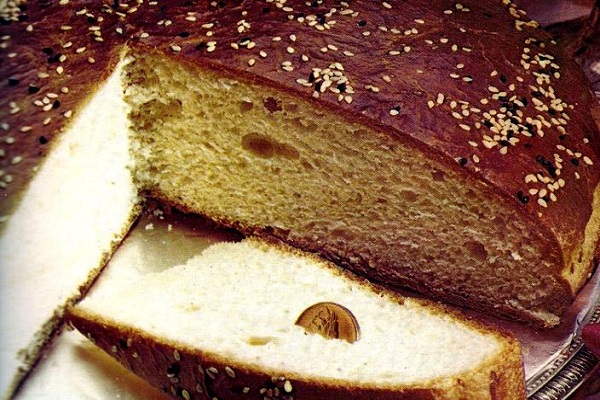 Most Greeks cut the Vasilopita  immediately after the turn of the year. In some areas, however,  the pie or cake is cut at the lunch table on Saint Basil’s day (1 January). But whenever the pie’s cut, the same procedure is followed. The man of the house makes the sign of the Cross three times over it with a knife and then starts cutting the pieces. The first is for Christ, the second for His Mother, the third for Saint Basil, the fourth for the house and then a piece for each member of the family, according to age. The last piece is for the poor. In some places, mainly agricultural areas, two more pieces are cut: one for the animals and one for the sown crops. Whoever finds the coin is considered to be the lucky person for that year and is usually given a gift or a sum of money together with the coin. If the coins is found in the portion of Christ, Our Lady or Saint Basil, the money’s given to the Church. If it’s in the portion of the poor, it’s given to a beggar.

In our house, in Attica, we’d cut it at lunch on Saint Basil’s day. Before cutting it, my grandfather would spin it on the table like a top and we’d all wait to see what side it would fall on. If it fell good side up, it would be a good year. If it fell on the other side, things would be difficult. I remember one year, the vasilopita stood on its end. With a little help, it eventually fell on the good side. ‘God helps those who help themselves’, don’t we say?

But let’s see what the origin is of the Vasilopita custom. We’ll need to travel back in time, to Caesarea in Asia Minor in the 4th century A. D. The leader of the Christians in the region at the time was one of the most important saints of our Church, Saint Basil. This was during the reign of Emperor Julian, who has gone down in history as ‘the Apostate’. On one of his campaigns against the Persians, Julian went through Caesarea. He was received by Saint Basil, who gave him three barley loaves. It should be noted that most of the inhabitants of Caesarea were poor and Julian himself had asked to be given whatever they had, though he’d expected gold and valuable gifts. Angry at the three barley loaves, after he left he sent them three bales of hay. Saint Basil then answered him: ‘As you asked, we gave you what we have to eat. We believe that you did the same. Thank you’. [In Greek, if someone ‘eats hay’, it means they’re a fool. WJL].

This made Julian even more angry and he vowed that on his return from the campaign, he’d destroy Caesarea. Time passed and the news that Julian was returning reached Saint Basil. In an effort to save his flock, he gathered the faithful and urged them to give anything of value that they had to give to Julian and appease him. The people did as their shepherd requested and brought their valuables. Then they held a vigil and prayed for their salvation. In the course of this vigil, Saint Basil had a vision. In this vision, Our Lady sent Saint Mercurius and a host of angels against Julian. The vision merely confirmed what was actually happening not far from the city. The danger was averted and the valuables returned to their owners. In order to stop people taking things that didn’t belong to them, Saint Basil ordered small pies to be made and the valuable were placed inside them. The pies were handed out to the faithful and, by a miracle, each person found in their pie whatever they’d offered to escape the wrath of Julian.

We honour this event and Saint Basil every year, through the custom of the Vasilopita.

A small glass of water from boiled aniseed

An egg to baste the cake

Put the flour in a bowl, make a small cavity in the middle and break in the eggs. Add the butter, sugar, warm milk, mastic gum, boiled aniseed water, salt and yeast.

Knead well until it becomes a regular dough and if it’s too dense, add a little warm milk.

Wrap the dough in a towel and allow it to rest for a while.

Knead it again, place it on a buttered baking tray, baste it with egg and sprinkle sesame on it.