14th Sunday of Saint Luke today, and we’ve now entered the month of Christmas. Jesus enters Jericho and comes across a suffering person whose affliction is blindness. It’s a terrible cross for him not to enjoy the first and greatest of God’s goods: perceptible light.

Apart from being blind, the unfortunate man in today’s Gospel reading is also a beggar. But it was begging that enabled him to gain his salvation. As people were walking past him, he sensed the entry of some figure of importance. When he heard of the presence of Christ in the city, he started shouting continuously and persistently: ‘Son of David, have mercy upon me’, to the point where the other people who were there with him asked him to stop. He, of course, took no notice and carried on, as a simple and humble beggar, begging for his redemption and salvation from our Great Physician, Who ‘bore the illnesses of the people’ [cf. Matth. 8, 17]. 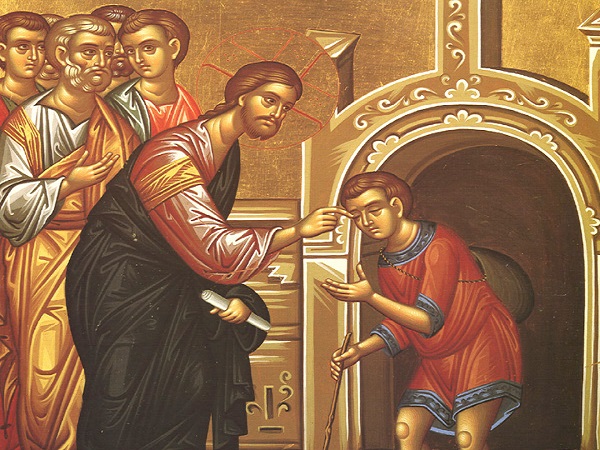 In the end, the humility and faith of the blind man attracted the attention of Christ, Who told the others to bring him forward. Christ asked what his request was. Naturally, the answer could hardly have been other than to have his sight back. And so it came about: the Lord restored the man’s sight.

If we wish to take a longer-term and more profound approach to this particular miracle, the thought of the Fathers gives us the beginning of the thread we should follow. They transposed the man’s blindness from the physical plane to the spiritual, making subjection to the sin of the passions of darkness the main cause of his affliction. From this point of view, many of us are, in essence, blind in the spirit, enslaved to our passions and weaknesses. What we really need is to go begging ourselves, as if we, too, were among the blind in Jericho, and to seek the restoration of the health of our spiritual eyesight under the stole of our spiritual doctor.

Yet the reality of life in our own day and age demonstrates that this spiritual blindness is neither general nor absolute. Strange as it may seem, in our own era, there are still people among us who have managed to live as ‘offspring of the light’. Holiness, which is as active and powerful today as it ever was, shows us the life of Light, not of Darkness. Only yesterday, the Church honoured an exceptional figure of holiness, Saint Porfyrios Kavsokalyvitis, who, although he became biologically blind, lived in the light of Christ, in the glory of the divine ‘cloud of unknowing’. Despite being blind in his physical eyes, this great saint of Athens had excellent spiritual eyesight, to the extent that, as another holy figure of the last century, Saint Païsios the Athonite, put it, he was able to see what was happening to people, and in the world generally, as if he were watching coloured television.

Another such figure was the latest person to be canonized, Saint Iakovos Tsalikis, who was Abbot of the Monastery of Saint David, on Evia. The ascetic of Evia had excellent physical and spiritual eyesight, so much so that, during the Divine Liturgy he saw the visible aspects, but also the invisible activity. These three figures of our own day are proof of the hope that darkness will not prevail, but that light will. These modern saints are a source of inspiration, not for us to copy their way of life literally, but to imitate their struggle. The struggle for the cleansing of the mind, of the heart and of our spiritual eyes. As Christmas approaches may our prayer and supplication be that, with healthy eyes rather than blind ones, we shall see Christ born in the cave. By the prayers of Saints Porfyrios, Païsios and Iakovos.