If it be true that the language of the future age will be silence, then Joseph, the betrothed of the Virgin, is a model of the person in this future age. Not a single word of his is preserved in the Gospels, nor is there any reference to any discussion with him. Only his thoughts and actions are described. He approached the mystery of the ineffable emptying of the Son and Word of God in awe, circumspection and silence. And when mistrust and doubt overwhelmed him, when he was afflicted by unbearable spiritual pain, then the heavens spoke.

But let’s start at the beginning. Joseph was on the threshold of old age when he was chosen to be the protector and guardian of the Virgin. But during the time of the betrothal, she was found to be with child ‘from the Holy Spirit’. This troubled him greatly and he considered Mary to be an adulteress. According to the poet who wrote the Akathist Hymn: ‘Tossed inwardly by a storm of doubts, prudent Joseph was troubled’. 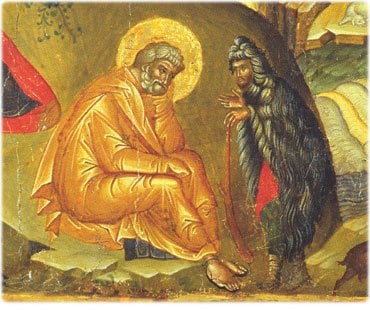 This inner turbulence is revealed in a clear and dramatic manner by another hymn-writer: ‘Joseph spoke thus to the Virgin: “Mary, what is this drama I see in you? I am bewildered and surprised and my mind is astonished. Instead of honor you have brought me shame; instead of joy, sorrow; instead of praise, blame. Now I will bear the reproach of others, for I received you spotless from the priests of the temple. And what is this I behold?’.

Despite his misgivings, but because he was a devout and righteous man, Joseph did not wish to make a public spectacle of Mary. He decided to dissolve the betrothal without going through official procedures. And it was then that an angel of the Lord appeared to him in his sleep and said: ‘Joseph son of David, do not be afraid to take Mary into your home, because what is conceived in her is from the Holy Spirit. She will give birth to a son, and you are to give him the name Jesus because he will save his people from their sins’ (Matth. 1, 20-21).

Joseph is unique, because he followed the path of his heart rather the strictness of the law. He’s called ‘righteous’, although he didn’t remain bound by the old law, which he transcended by participating in the work of grace. He became a minister of the new covenant, not of the letter of the law but of the Spirit of God: ‘For the letter kills, but the Spirit gives life’ (2 Cor. 3, 7). Besides, Christian righteousness is above and beyond the reaches of any attachment to the letter of the law.

The Gospel words are full of life and vigor, sharper than a double-edged sword. They delve deep and weigh people’s reflections and intentions (cf. Heb. 4,12). But silence can save equally well. Not guilty silence, but that which is accompanied by simplicity of heart, clarity, generosity of spirit and unconditional obedience to the divine will. In the case of Joseph, silence serves the miracle of Christ’s nativity.