Sunday after Epiphany: ‘As many as have been baptized in Christ have put on Christ’

With the Lord’s feast of Holy Epiphany-Theophany, another beautiful and incomparable liturgical cycle of the year has been completed. The conclusion of the holy twelve days is sealed with the ‘Lights and Effulgence’, as the writer Alexandros Papadiamantis put it. After the experience of the ineffable mysteries of the cave in Bethlehem, everything is lit up, everything is sanctified; the springs, the rivers, the whole of creation because of the Baptism of Christ, the God and Human.

Indeed, ‘every tongue fails’ and ‘the mind reels’ in every believer at the sight of the King of Glory coming to be baptized. The River Jordan rejoices and is glad at encountering and welcoming into its water its own Creator. Jesus Christ, the source of humility, comes to the River Jordan as an ordinary Israelite to accept the baptism offered by His herald, John the Forerunner. 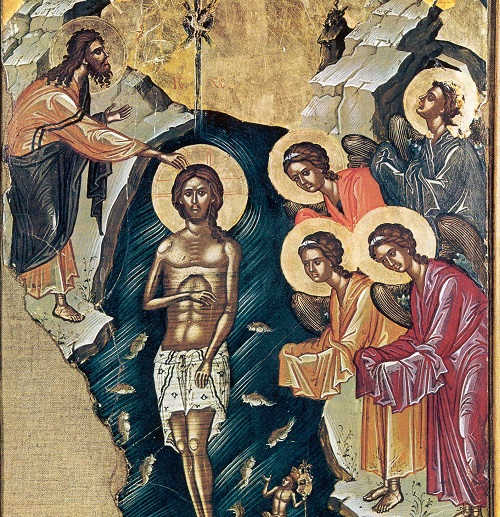 Through his voice and the baptism he performed, the Forerunner called on the people to prepare for the coming of the great Messiah of humankind. In other words, baptism in the Jordan was a preparation for the advent of Christ. Through John’s message and through baptism by him in the River Jordan, people were cleansed and prepared for the Messiah’s coming. In reality, Christ had no need of the ‘cleansing process’ of John’s baptism, since He’s sinless God. Despite His divine nature and perfection, He stooped down once again, as He did with His humble birth in the cave in Bethlehem. In His mercy, He agreed to be baptized by dispensation for the sake of ‘Adam the first-formed’. Since Adam, through his disobedience, forfeited the purity given to him by his Creator, the latter was baptized as a human person in order to endow us with the sacrament of cleansing and restitution.

The Jordan became the Biblical and historical substantiation of the sacrament of Baptism. This great mystery which purifies and brightens our being, changes us from people stricken with age as a result of the Fall into young Christ-bearers of the Resurrection. According to the Fathers, our baptism makes us ‘as sinless and sanctified as the first Adam’, and after it we’re all called upon to preserve our purity through the way of life we lead.

The feast of Epiphany is directly linked to the sacrament of Baptism. The baptism of Christ was the reason why the Apostles were later able to ‘baptize in the name of the Father and of the Son and of the Holy Spirit’. And, of course, this sacrament doesn’t cleanse us or redeem us from sin by some magic means. Nor is it simply a way of making someone a Christian. Baptism is a matter of walking the path of life in the company of the Lord. That is, everyone who is baptized is called upon to live ontologically with Him Whom they put on at baptism. Rejection and divestment of the legacy of baptism is tantamount to perdition for the person who does so.