The Fast on the Eve of Theophany

It’s often said that the fast on the eve of Theophany has to do with the consumption of great holy water and that therefore drinking it requires a one-day fast. It would be to the point to say a few words on the subject here, given that it’s one of the most-discussed issues related to the holy water of Theophany and one on which the faithful seek guidance from the clergy.

That great holy water ‘is second in rank among the divine mysteries’ (Service Book, Vatopaidi cod. 134 [745], from the year 1538), is beyond question. It’s the ‘water of rebirth’, of holy baptism, which, through the invocation and visitation of the Holy Spirit is ‘reconstituted’ (or ‘transconstituted’) according to Saint Cyril of Alexandria (On John 2, 1) and becomes ‘a source of incorruption, a gift of sanctification, a release from sin and a protection against sickness’ [Service of Baptism] for the faithful who partake of it or are anointed with it, a provider of sanctification and blessing for the whole of creation. 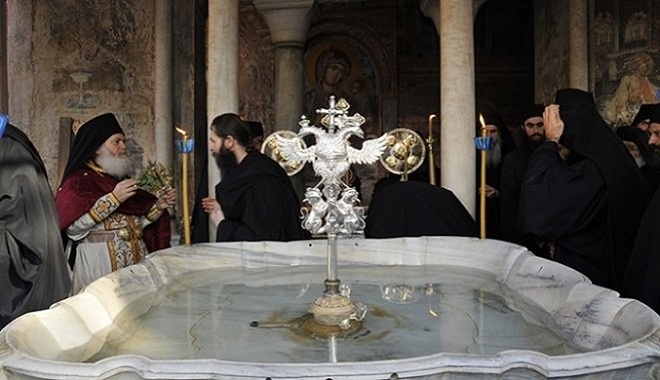 That the great holy water is the same as the water of holy baptism is also clear from the identical nature of the sanctifying prayers, as well as from the ancient- and still observed- practice of the Church regarding the baptism of catechumens. Saint Symeon of Thessaloniki, indeed believes that, conversely, the water of baptism ‘is in no way lesser than that of holy Theophany (Dialogue chap. 70). As such it’s given to the faithful instead of holy communion, if, for some reason, they are prevented from taking the latter.

It is precisely this which has caused two pious misunderstandings: that it’s a substitute for holy communion, being in some way equal to it and that, by analogy, consumption of it is preceded by a fast. Regarding the first, there can be no discussion, because while it’s true that, for the reasons we’ve mentioned,  it’s the most holy of the sacraments after communion, it’s in no way equal to partaking of the body and blood of the Lord, nor can it ever substitute for this. Despite this, there’s a popular notion that we don’t take communion at Theophany because we’ll be taking holy water and ‘it’s the same’.

As regards the fast before drinking holy water, this was probably cultivated by analogy with the modern [Professor Foundoulis was writing at the time when the Church of Greece was under the influence of the religious brotherhoods] custom of a three-day fast before communion. It wasn’t possible for this fast to be for three days, however, because of the dispensation ‘for everything’ for the twelve days after Christmas, except, of course, for the Eve of Theophany. As regards this fast, which is commonly understood to be for the great holy water, it has nothing to do with it and is observed whether people intend to partake of the holy water or not. This is why there’s still no dispensation if we drink holy water on the Eve of the feast.

The fast had its beginnings in the ancient custom in the Church of a one-day fast before a great feast, either for the baptism of catechumens which was performed on these days or as a way of elevating the main day of the feast and a way of preparing for it through fasting, restraint and prayer. That the fast has nothing to do with drinking holy water is confirmed by the fact that the blessing of the water also takes place nowadays on the Eve of the feast, and there isn’t a fast the day before.

So, is there no fast before we drink holy water? There certainly is. But it can’t be  stricter or longer than the fast before we take holy communion, what we call the ‘Eucharistic fast’. This latter fast is clear and can’t be broken, the sole exception being if someone’s life is in danger. It involves total abstention from food and drink after supper or midnight on the previous day until the time of communion, whenever this is- in the morning, outside Lent, or in the evening during Lent.

According to the order envisaged by the Church, the blessing and drinking of the holy water takes place after communion and before the consumption of the antidoro. In modern practice that is after the prayer ‘Lord you bless those who bless you’ and ‘Blessed be the name of the Lord’, which precede the distribution of the antidoro and dismissal.

According to the fathers and the tradition of the Church, fasting is a ‘great good’. It functions, however, within certain specifications regarding intensity and length of time which we’re called to focus upon and put to good use. Extending a fast beyond these bounds, however, can produce negative results which, in the end, can prove to be at odds with the will of God and the aim of the Church, which is the sanctification of all creation through the partaking of holy communion and the sprinkling of the great holy water of Theophany. Perhaps a good compromise between the older and modern practices might be to eat Lenten food at the last meal before communion, even on a Saturday and a Sunday.