The Service of the Great Hours on the Eve of Theophany

In completing the Twelve Days of Christmas, that is the festal cycle of the Epiphany of the Incarnate Son and Word of God, Jesus Christ, we come to the feast of Theophany, at which we recall the Baptism of Christ, at the age of thirty, by Saint John the Forerunner, in the River Jordan. A particular feature of the Church festivities is the service of the Great and Royal Hours, on the eve. 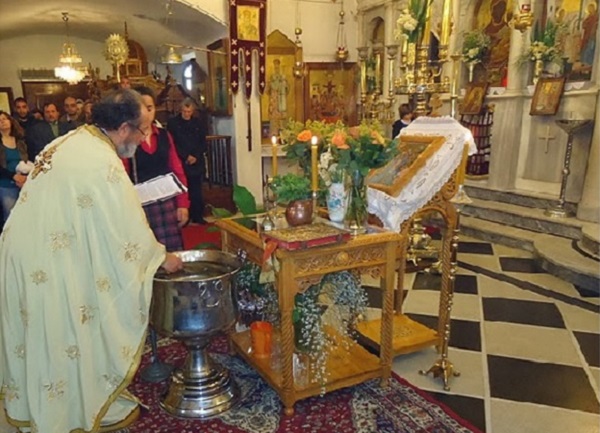 In fact, this service isn’t a unified whole, but rather four separate ones linked together. Since they’re celebrated together, without any obvious breaks between them, they’re thought of as one. They’re the services of the First, Third, Sixth and Ninth Hours, which make up the familiar monastic rule of the services of the Hours.

The names come from the fact that they were held at particular times during the Byzantine day. Like the Hebrew system of time keeping, that in Byzantium was based on the watches of the day and the night. The first hour of the day in Byzantium was what we would call six o’clock- notionally, sunrise- while the first hour of the night was six o’clock in the evening- representing sunset. The service of the First Hour was held at six o’clock in the morning, the Third at nine o’clock, the Sixth at noon and the Ninth at three o’clock in the afternoon.
The reason the Hours on the eve of Theophany are called ‘Great’ and ‘Royal’ is because of their festal content and because they’re dedicated to the Baptism of Christ, the King of All, while structurally they’re longer and more splendid (Scriptural reading, three hymns and so on). The Hours on the eve of Christmas and Great Friday also bear this title.

The usual content of the hymnology of the services of the Hours is specific dedicated to a particular subject matter at each service. This subject matter of the daily services is not followed, however, on the eve of Theophany, at which the prime subject is the Baptism of Christ.

The structure of the Hours for Theophany, though, is basically the same as the normal. Each Hour begins with the ‘Thrice-Holy’, ‘Lord have mercy’ twelve times, ‘Come, let us worship’, three psalms, and the dismal hymn for the fore-feast of Theophany. Then come three hymns, each of which is sung three times, the first plain, the second with verses from the psalms interspersed and the third after the small doxology ‘Glory to the Father. Both now’. While the three hymns are being sung, the celebrant censes the whole church and the congregation with the hand-held censer. He wears his stole and exits the sanctuary through the north door, re-entering through the south. After this, there’s a reading from the Old Testament, an Epistle and a Gospel. Then the hymn for the normal Hour is read, the ‘Thrice-Holy’, the kontakio for the fore-feast, ‘Lord have mercy’ x 40, the prayer ‘You Who at all times and at every hour’. The priest then proclaims ‘May God have mercy upon us’ and this is followed by the prayer for each hour (1st: ‘Christ the true light’; 3rd: ‘Lord God, Father Almighty’; 6th: ‘God and Lord of Hosts’; 9th: ‘Lord and Master Jesus Christ’).

On the completion of each Hour, there’s the dismissal, if the four services are celebrated separately and at the corresponding time of day. Modern parish practice doesn’t favour this arrangement, so, after the reading of the prayer of each Hour, the next one begins, starting with ‘Come, let us worship’, rather than the ‘Thrice-Holy’, which is omitted.

There are two outstanding features of the 9th Hour at Theophany. First, the third hymn of those sung before the readings, is read aloud by the canonarch in the middle of the church, in front of the icon of the Baptism of the Lord, which has been placed there specially. When the canonarch has completed the reading of the hymn, the two choirs sing alternate verses, repeating three times the first line (‘With your hand you touched’) and penultimate (‘Come and stand with us’) Secondly, after the prayer of the 9th Hour, there follow the Typical Psalms and the Beatitudes. In the event that Vespers of the Theophany and the Divine Liturgy of Saint Basil the Great follow immediately, the Typical Psalms and the Beatitudes are omitted the celebrant proclaims the dismissal of the Hours, upon which Vespers begins at once.

In general, the services for the eve of Theophany follow an older order, as compared to the other days of the year. Among the special liturgical features is the celebration of the Great Hours, even in parish practice. The celebration of a) the Divine Liturgy of Saint Basil the Great, the nucleus of which is older than that of Saint John Chrysostom, and b) Compline, in the afternoon, in place of vespers, which has been read in the morning, are two other special liturgical features. It should be noted that the celebration of the Liturgy of Saint Basil, together with Vespers for the feast, is, in the official order of service of the Church, the official, main and festal Eucharistic rite for the feast of Theophany, and took place in the evening, during a vigil. In the ancient order, the Liturgy of Saint John was the second liturgy of the feast and was celebrated on the morning of the day of Theophany itself, by another priest.

The services for the eve of Theophany are evidence of the special character of the day, which is considered the culmination of the pre-festal days (pre-festal hymns for Theophany have been sung at services from as early as January 2). The eve is the most important day for the faithful to prepare for the official celebration of the Theophany of the Lord, while the Great Blessing of the Waters, which is celebrated that day, is in all ways the same and equal to that of the day of Epiphany itself, and assists in the sanctification of humanity and nature, as well as in the purification from sin and corruption.