Which baptism was performed, in His case? Not that of the Jews, nor ours, nor John’s. Why? You yourselves, from your own view of baptism, can see that He wasn’t baptized for any sins, nor because He needed the Holy Spirit; therefore, as we’ve shown, this baptism was alien both to the one and to the other.

It’s clear, then, that He came to the Jordan, not for forgiveness of sins and nor to receive the gifts of the Spirit. But, just in case some of those present thought that He came for repentance, as others did, John specifically precluded this. When he spoke to the others he said: “Bear fruits worthy of repentance”; but listen to what he said to Him: “I have need to be baptized of You, yet You have come to me?” (Mt. 3, 8:14). 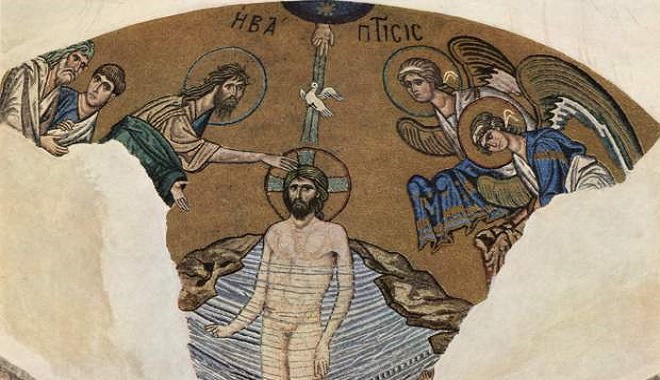 With these words he demonstrated that Christ had come to him not through the need for which other people came, and also that He was beyond any such need, that He was much more sublime and perfectly pure than Baptism itself. Why was He baptized, then, if this was done not for repentance, nor for the remission of sins, nor for the gifts of the Spirit? For two other reasons, of which one is mentioned by a disciple, and another about which He Himself spoke to John. What did John the Baptist himself see as the reason for this baptism?

That Christ should become known to people, as Paul also mentions: “John therefore baptized with the baptism of repentance, so that through him they should believe in Him Who was coming” (Acts 19, 4); this was the achievement of the baptism. Had John gone to the home of each person and, standing at the door, had spoken about Christ and said: “He is the Son of God,” such testimony would have been suspicious, and the action would have made for difficulties. Equally, had he gone into the synagogues to champion Christ and witness to Him, this testimony of his might have sounded suspiciously fabricated.

But when so many people thronged from all the cities to the Jordan and were staying on the banks of the river, and when He Himself came to be baptized and received the testimony of the Father through a voice from above and by the descent of the Spirit in the form of a dove, then John’s witness to Him was beyond all dispute. And since he said: “and I didn’t know Him” (Jn. 1, 31), his testimony is trustworthy. They were related after the flesh-  “therefore Elizabeth, your kinswoman, has also conceived a son”, said the Angel to Mary about the mother of John (Lk. 1, 36); if the mothers were kin, then, obviously, so were the children, too.

Since they were related, and so that it shouldn’t seem that John was testifying to Christ because of kinship, the grace of the Spirit arranged for John to spend all his early years in the wilderness, to avoid the appearance that John had declared his testimony out of friendship or some similar reason. But, as instructed by God, John also announced: “and I didn’t know Him”. So how did he find out? “He who sent me to baptize with water said to me, ‘He on whom you see the Spirit descend and remain, this is He who baptizes with the Holy Spirit’. And “I saw the Spirit descend from heaven like a dove, and it remained on Him” (Jn. 1, 32-33). Do you see that the Holy Spirit did not descend as if it were the first time, in order to indicate that He was the One Who had been foretold through the inspiration of the Spirit? As though by a finger, He was pointed out to everyone, and this is why He came to baptism.

There’s also a second reason, about which He Himself spoke? When John said: “I have need to be baptized of You, yet You have come to me?”, Christ answered: “Let it be so now, for it is fitting for us to fulfil all righteousness” (Mt. 3,14-15). Do you see the meekness of the servant? Do you see the humility of the Master? What does He mean when He says: “to fulfill all righteousness?”. “Righteousness” means fulfilling all the commandments, as in: “both were righteous, walking faultlessly in the commandments of the Lord” (Lk. 1, 6). Since fulfilling this righteousness was necessary for everyone, but no-one had done so properly, Christ came and put the fulfillment of the commandments into practice.

Now you might ask where the righteousness is in being baptized. For a prophet, obedience was righteous. Just as Christ was circumcised, offered sacrifice, kept the Sabbath and observed the Jewish feasts, so He also added this remaining thing: that He consented to be baptized by a prophet. It was the will of God that all should be baptized, as John says: “He having sent me to baptize with water” (Jn, 1, 33). And Luke later relates: “When all the people heard this, and the tax collectors too, they declared God just, having been baptized with the baptism of John, but the Pharisees and the lawyers rejected the purpose of God for themselves, not having been baptized by him” (Lk. 7, 29-30). So if obedience to God constitutes righteousness, and God sent John to baptize the nation, then Christ also fulfilled this, along with all the other commandments.

Suppose that the commandments of the law are two hundred denarii. This was a debt due to be paid by the human race , but we didn’t do so. We were in the power of death, because we were under accusation. Christ came, and finding us afflicted by death, He paid the debt and freed those who had been unable to meet their obligations. This is why He doesn’t say: “It is necessary for you to do this or that,” but rather “to fulfill every righteousness” “It is proper for Me, being the Master”, He says, “to make payment for the needy”. These were the reasons for His baptism: that people should see that He had fulfilled the Law; and the other one we mentioned before.

This is also why the Spirit descended as a dove: because wherever there is reconciliation with God, there is the dove, too. Just as happened with Noah’s ark, the dove brought an olive branch, a sign of God’s love of mankind and of the cessation of the flood. Now, in the form of a dove, and not in a body– this is particularly worthy of note- the Spirit descended, announcing the mercy of God to the whole world and showing thereby that spiritual people should be gentle, simple and innocent, as Christ also says: “Unless you repent and become like children, you will not enter into the Kingdom of Heaven” (Mt.18, 3). But after the cessation of the flood, the ark of Noah remained on the earth; this ark, after the cessation of wrath, is taken to heaven, and now this immaculate and imperishable Body sits at the right hand of the Father.