On the Canaanite Woman

The Gospel for the day refers to a woman who is a Canaanite. You heard her crying out to the Lord, following along behind him, begging him and receiving no answer. His disciples couldn’t understand why he wouldn’t help her or, if not, why he didn’t get rid of her instead of allowing her to continue to entreat him. He explains his silence: ‘I came only for the children of Israel, not for foreigners, not for strangers such as this Canaanite woman’. The woman persisted, however, approached him and bowed before him, seeking his help. Teaching his disciples, the woman and all of us ever since, the Lord replied by insulting her: ‘It’s not right to take bread from your children and give it to the dogs’. In this way, he likens God’s blessing with the most basic of human needs, bread. The woman refuses to back off and replies: ‘Yes, Lord, but even the dogs eat from the crumbs that fall from their masters’ table’. Christ then tells her: ‘You have great faith, woman. What you want will be done’. 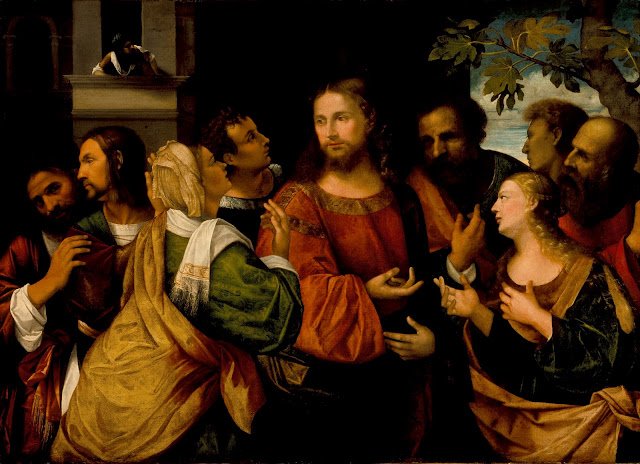 Let’s dwell on this incident a little. The Lord had left Judah and was on his way to Sidon, in today’s Lebanon. This was the land of the Canaanites, a nation who had lived in the region before the coming of the Israelites out of Egypt with Moses. They were pagans and their women practiced magic.

Christ went to her land, but the Canaanite women herself had to want him, seek him, call to him from the depths of her soul. She sensed his presence close to her and began to cry out to him. It wasn’t some enchantress or sorceress who was calling to him. She addressed him in terms of his specific capacity, in a sense his real name ‘Son of David’ [= Messiah], and ‘Lord’. And, the more she called upon him, the nearer she approached him; the more she sought him, the more she found him. Initially, the Lord didn’t speak to her, testing her faith in a very harsh manner. He allowed her to follow him without any response on his part. And then, when he did eventually speak, he insulted her. Of course, no racial slur was intended; the Lord was highlighting his rejection of paganism and magic. But we see that the woman’s faith wasn’t shaken at all by the insult; she kept asking for mercy, asking for the miraculous intervention of the Lord in her own life and that of her daughter.

What were the words of the Canaanite woman to Christ if not prayer? What was her running after him, if not a turnaround of her life to his word? Her humility, her acceptance that, yes, she was an unworthy dog asking merely for a few crumbs from the left-overs of the table of the faithful are what, if not repentance and confession? And the final answer of the Lord, what is it if not an opening of his embrace, a generous response to the unshakeable faith of the person concerned?

The Church is the mystical locus where we all meet. Here is the Lord, here are the angels, here are the saints and the faithful, Also here with us, drawing us to her with great love, is the Mistress of the house, the Mother of God.