In our modern culture of indulgence, pleasure, and comfort, many Christians tend to complain about sickness, suffering, and pain. As humans, we normally tend to pursue pleasure and flee pain. But how do we reconcile human suffering with the existence of a loving Creator and God? God loves us with the kind of love that demands the perfecting of the beloved. “He whispers to us in our pleasures, speaks in our conscience, but shouts in our pains” (C. S. Lewis, The Problem of Pain, p. 81). The experience of pain can lead to two extremes: either full repentance, or rebellion and atheism. St. Paul remarks, however, that Christians are made “perfect through sufferings” (Hebrews 2:10). “For in proportion as the strain of the affliction is increased are the garlands of victory multiplied; in proportion as the gold is heated does it become purified” (St. John Chrysostom, Letters from Exile to Olympias).

We look back at the early Christian period and see many good people who suffered much torture for their faith. Some became martyrs, and others confessors. They were willing to make the supreme painful sacrifice, the last thing expected of lesser mortals in whom the instinct for self-preservation is at its strongest. At the end these great soldiers of Christ received not a death, but a crown; not an end, but the beginning of a greater life. What was their motivation? They passionately loved their Lord Jesus Christ, the God who vigorously and fervently loved them first and was crucified for their salvation and resurrected from the dead. Thus, they considered it an honor to be chosen to acknowledge Him with martyrdom. They came from every walk of life and from all professions and trades. Some were soldiers, paupers, and servants, while others were army generals, surgeons, and even princes.

Saint Julian was a young man from Syria. In his Christian walk, he offered us not the authorship of theological books, but the remarkable Christian witness of a young, daring physician. He suffered much persecution and signed the last page of his life with the blood of his martyrdom.

Julian (or Elian in Arabic) was born in Emesa (modern-day Homs), Syria, in the middle of the third century. He was raised in a noble and rich family, a highly educated young man with a promising future. He became a skilled surgeon and a humble philanthropist whose medical services were provided free of charge. His fame spread in the city. We do not know under what circumstances Julian committed his life to Christ. Surely, however, he practiced Christian charity in his profession. He not only treated his patients without cost, but also practiced philanthropy. As a result of his strong faith and many virtues, the Lord God gave him the gift of healing and the power of exorcism.

Some of the medical practitioners in the city knew of him and his many good works and virtues. They were envious and plotted to intimidate the young man. Scripture tells us that “a servant is not greater than his master” (John 15:20). If unbelievers persecuted his Master and crucified Him because of envy (Matthew 27:18), would they not do worse to His faithful disciple Julian?

Persecution by State and Family

The parents of Julian were pagans, like most of Emesa’s citizens. Rumors spread that their son was a Christian believer. In the meantime, a royal decree was issued commanding the Roman governors everywhere to persecute and arrest all who adhered to the faith of Jesus of Nazareth. Julian’s father, being a high-ranking officer of the governor in Emesa, took this opportunity to prove his loyalty to his governor. Even though he was capable of arresting those envious surgeons who spread rumors about his son, he tried instead to capture Christians in the city. He arrested Silouan, the bishop of the city, along with his two disciples, Luke the Deacon and Mokimos the Reader. The soldiers threw them in prison after beating them unmercifully. Then, in order to instill fear in the citizens of Emesa, they tied them with a rope and pulled them by a chariot all along the city streets. “Blessed are you when they revile and persecute you . . . for My sake. . . . great is your reward in heaven” (Matthew 5:11, 12).

After forty days in prison, the governor brought them to trial. He threatened them with all kinds of torture. They retorted fearlessly, “We worship Christ, our Lord and Savior. We fall down before Him, offering Him our lives as a sacrifice. Our bodies are yours. Do whatever you want with them.” The pagan governor was furious. He ordered his soldiers to stone the prisoners and torture them because they refused to deny Christ. Bishop Silouan and his two disciples steadfastly endured all these trials, praying to the Lord to give them power and patience. Their minds were set on heaven, according to the words of the Lord, “He who loses his life for My sake will find it [in eternal life]” (Matthew 10:39).

Julian could not bear to see his dear bishop under such great torture. He sneaked into the prison where his beloved ones were held. He used his skill as a physician to bind their wounds. When the soldiers discovered the intruder, they immediately arrested him and took him to his father, who in his turn surrendered him to the governor. Is it not written that in the last days “father will be divided against son and son against father” (Luke 12:53)? The governor handed Julian over to his father again, giving him authority to do whatever he saw fit. The father put his son in prison and ordered the soldiers to throw the bishop and his two disciples as food to wild beasts. In the arena, the three lifted up their prayers to the Lord, awaiting their martyrdom. Suddenly, an unexpected miracle took place. As happened with the three youths in the Old Testament (Daniel 3), a storm hit the area and hail covered the city, scaring away the wild beasts. In the meantime, Julian succeeded in escaping from prison. He joined the three faithful. As a result of the storm, which was obviously miraculous, many citizens believed in Christ. Seeing that the matter was getting out of control, the governor of Emesa ordered the execution of all captured Christians, except Julian.

Left alone, the pagans mocked Julian, saying, “You see, the crucified son of Mary was not able to protect your bishop!” They incited him to abandon his juvenile convictions. Filled with the Holy Spirit, however, he gave an answer that shocked them: “Free me, I need to go destroy your pagan statues, and if your silly pagan gods can forbid me from doing so, then I will renounce my faith!” 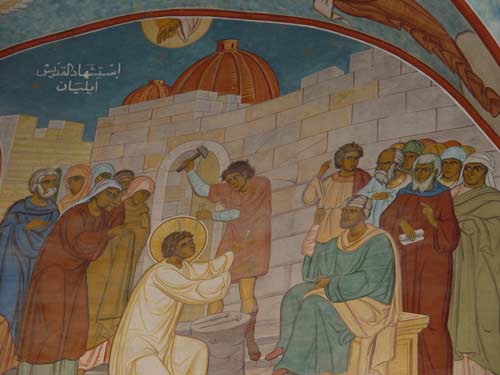 At first, Julian’s father only wanted his son to renounce Christ. So, to humiliate him, he asked the soldiers to tie him to a horse and drag him along the narrow paths of Emesa. Under this tremendous pressure, Julian displayed much boldness and courage. He was facing the hard-heartedness of his father, the envy of his fellow physicians, the mockery of the ones he had freely cured, and the physical pain of torture.

When he arrived in front of his father’s house, Julian shouted: “I am Julian, the Christian surgeon. I believe in Christ, who came for the salvation of the world and showed us the way of life.” Having said that, he was stoned and thrown into prison. He remembered his Master’s call, “If anyone comes to Me and does not hate his father and mother, wife and children, brothers and sisters, yes, and his own life also, he cannot be My disciple” (Luke 14:26). Also, “I send you out as sheep in the midst of wolves. . . . The time is coming that whoever kills you will think that he offers God service. . . . You will weep and lament, but the world will rejoice” (Matthew 10:16; John 16:2, 20).

Julian’s pain and torture continued for eleven months, during which his father tried to persuade him to renounce Christ by sending many emissaries. Startlingly, every time an emissary approached Julian in the hope of turning him away from Christ, the reverse happened. The emissaries turned to the Lord and declared their willingness to be baptized.

Julian’s brutal father ran out of patience. He had to make a choice, either to join his son in the life in Christ and be killed, or to put his son to death. He chose the latter. His anger extinguished his paternal feelings. He asked a blacksmith to implant nails in his son’s head and feet, and to release him to wander around in agony. Carrying unbearable pain in his body, Julian walked alone to a cave outside the city walls. There he prayed and gave up his soul into the hands of the Lord on February 6, 284.

The next day, a vision led some Christians to the cave where Julian’s body lay. They secretly took his relics to a hiding place in Emesa. His holy relics have been sources of healing and blessing for many faithful throughout the ages. The Christians in Emesa began celebrating each anniversary of his martyrdom. The cult of Julian’s relics grew in the city, especially after he was declared a saint by the local church. During the time of Emperor Theodosios the Great (389–395), a great church was built in Emesa in the name of St. Julian. Historic documents mention the existence of this church since the sixth century.

During the year 1970, renovations in the church led to the rediscovery of the coffin containing the relics of the Holy Martyr Julian. Many frescoes and icons dating back to the sixteenth century were also uncovered. Today St. Julian’s Antiochian Orthodox Cathedral (Deir Mar Elian in Arabic) in Homs is the only church in the world that carries his name. Every year, Homs celebrates the memory of this great Antiochian martyr in the presence of thousands of Christian faithful. 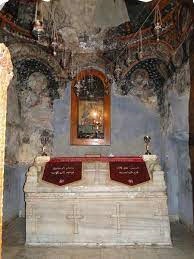 Reading the saints’ lives, some may wonder about the authenticity of these stories. Contemporary man with all his individualistic and self-centered tendencies finds it hard to understand all the saint’s painful endurance. Therefore, many scholars claim these accounts to be more legend than reality. Unfortunately, they miss the essential point! The accounts of the saints’ lives are not legends, but realities showing the power of God, the power of the Resurrection, and the transformational power of the Holy Cross of Christ. Indeed, the martyrs suffered much pain, but their faith in and love of Christ conquered all their afflictions. It is through all this suffering that they enter into the mystical presence of the power of God. The Divine Grace of the Lord visits and comforts the suffering servant. This is the personal experience of every true faithful one in pain. He suddenly receives this mystical power of God, and with this power shakes the foundations of the earth. St. Stephen the First Martyr told us about his mystical experience just before martyrdom: he “saw the glory of God” (Acts 7:55). “The sufferings of this present time are not worthy to be compared with the glory which shall be revealed in us” (Romans 8:18).

The pain and suffering Julian endured in the name of Jesus Christ brought him many blessings. Julian inherited the eternal life of blessedness in heaven. This is the promised state where “God Himself will be with [men] and be their God. And God will wipe away every tear from their eyes; there shall be no more death, nor sorrow, nor crying. There shall be no more pain. . . . Behold, I make all things new. . . . He who overcomes shall inherit all things” (Revelation 21:3–7).

May this great physician and martyr intercede for the peace of the holy land of Syria and for the healing of our souls and bodies. Amen.