Sunday of the Prodigal Son

Time and again I have occasion to preach on the Parable of the Prodigal Son, on the story of the Publican and the Pharisee, and every time I notice how easy it is for me – not in fact, not in reality, but in imagination – to identify with the sinner who has found his way to God, with the publican who stood broken-hearted at the gate of the church, unable to walk even into the holy space of God, or with the prodigal son, who in spite of grievous sin, of incredible insensitiveness, of cruelty, still found his way home.

And how rarely I was touched to the quick by the destiny of the pharisee, by the destiny of the elder son – yet, God condemned neither of the two. About the publican He said: And this man went home more forgiven, more blessed than the other one. He did not say that the pharisee went without the love of God accompanying him, that God was forgetting his faithfulness, his sense of dutiful obedience. 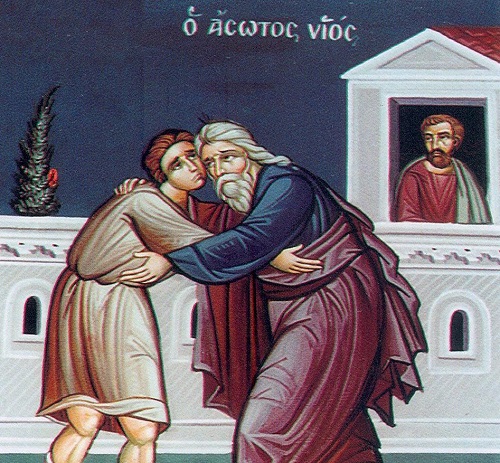 And again today we find ourselves face-to-face with the elder son. All his life he had lived side-by-side with his father, all his life he had made his father’s interests his concern – he had worked hard, faithfully, forgetful of self, without paying attention to tiredness, without claiming any reward just because he felt it was right to do so. There was something indeed lacking in him – a warmth, a tenderness, a joy in his father. But there was one thing which is so impressive in him – his faithfulness; in spite of the fact that his heart was not aglow, he remained faithful. In spite of the fact that he received no visible reward or no visible acknowledgement he remained faithful, he worked, as he says – he slaved.

How hard we are when we think of him as of one who deserves little of our sympathy; but how few of us are capable of being so faithful, so perfectly and steadily obedient to the call of duty as he was when we are not met with recognition, do not hear a word of encouragement, do not receive the slightest reward because, as the father did with regard to the elder son, those who surround us, those whom we serve, for whom we slave perhaps, those whose interest is at the very centre of our life, take it for granted. Isn’t it natural? Isn’t he my son? Isn’t he my father? Isn’t he my brother? Isn’t he my spouse? Isn’t he my friend? Doesn’t all this imply total, unlimited devotion which is its own reward?

How cruel we are so often to the people who surround us and who are put by us in the position of the elder son – never recognised and always expected to do the right thing unflinchingly and perfectly.

Indeed, the prodigal son had warmth, the prodigal son had come back broken-hearted, he was ready to become new, while the other one could only go on, plod on with his stem faithfulness; unless – unless, confronted with the father’s compassion, he understood what it meant that his younger brother had been truly dead and had come to life, had been truly lost and was found.

Let us think of ourselves. We, all of us, have someone around us whom we treat with the same coldness with which we think of the elder brother; but also all of us have someone whom we treat as contemptuously and harshly as the elder brother treated his younger brother whom he had written off, who was no brother to him; he had been unfaithful to their father, he was unforgivable. And yet, here was the father, the victim of the son’s rejection, light-mindedness, cruelty, who forgave wholeheartedly and tenderly.

Let us find our own place in this tragic and beautiful parable because then we may find our way, either out of being the elder son, though perhaps so much less dutiful, so much less honest, so much less devoted to the interests of our father, our friends, our relatives; or else perhaps, can we find in our heart a creative sympathy for the younger son and learn from him first that there is never a situation out of which a honest repentance, a turn-about cannot bring us and that there is one at least – God – and probably one person, or many, who are ready to receive us, redeem us, restore us and allow us to begin a new life together – father, younger and elder brother. Amen.