Symeon, the Last of the Righteous. On the Reception of the Lord

Symeon, who from Pharisaic blasphemy sprouted like a rose from among thorns, is the first person we know about who acquired the great boon of God’s grace. Symeon, who had progressed so far in righteousness that he personally received a divine prophecy which stated that he would not leave this transient life before he had embraced, with his own human hands, the life eternal, that is our Lord Jesus Christ. The righteous Symeon, therefore, desired to see the Lord before His incarnation, but he saw Him after and realized who He was. 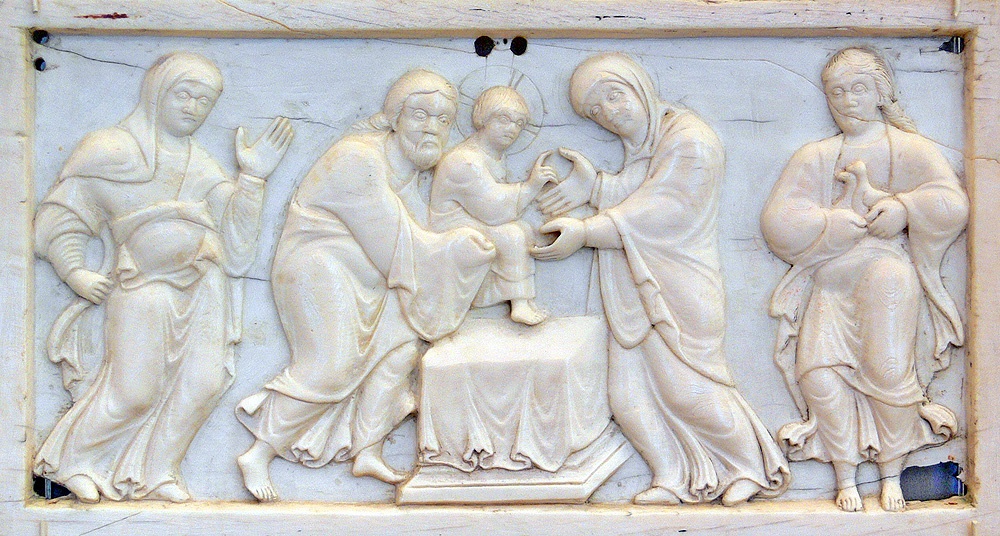 The presentation of the Lord, Bode Museum, Berlin, 10th Century

He embraced Him and asked to be allowed to take Him into the arms of his mortal body. With the demeanour of a servant, he cried aloud to the Lord of the universe, Who had the form of an Infant, the words we heard just a little while ago: “Lord, now you can let your servant die in peace, as you promised, because my eyes  have seen the Saviour Whom You have prepared for all the nations”. I’ve seen, now I can die, and not remain here on earth. I can die in peace and not remain here in pain. I’ve seen, let me die. I’ve seen Your glory, Lord: the choirs of angels, the hymns of praise of the archangels, nature skipping for joy, the celestial communing with the earthly. 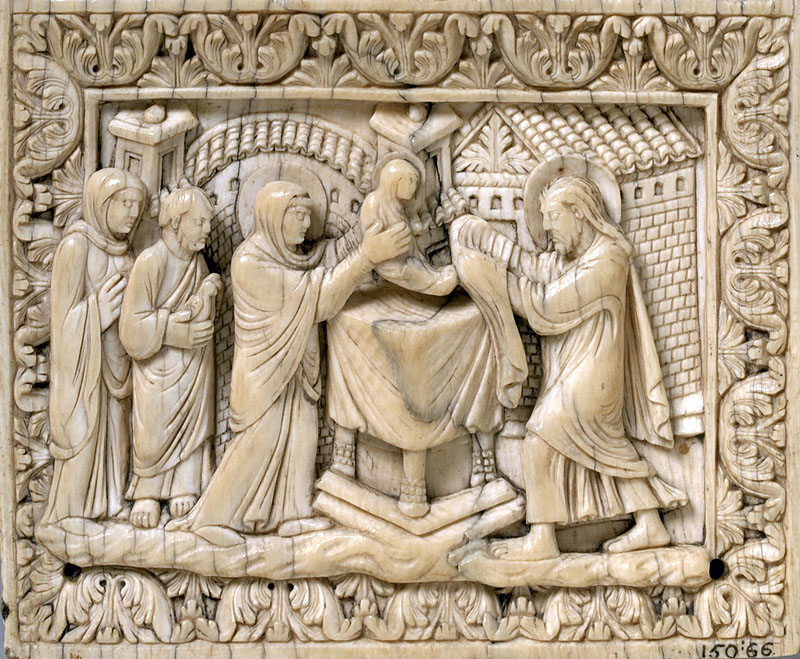 The presentation of the Lord, 9th Century, Lotharingia

What does the Evangelist have to say about this? You heard him saying earlier: “Now there was a man in Jerusalem, whose name was Symeon, and this man was righteous and devout, waiting for the consolation of Israel, and the Holy Spirit was upon him. And it had been revealed to him by the Holy Spirit that he would not see death before he had seen the Lord’s Christ. And he came in the Spirit into the temple…”. What does it mean when it says: “And he came in the Spirit into the temple…”? Listen carefully. While Symeon was in his home and silently praying for the prophecy to be fulfilled, Joseph and the Virgin, of their own accord, thought to take the little Jesus to the Temple, for the appropriate rituals to be performed.

It was at that moment that the Holy Spirit activated the prophecy and motivated Symeon, saying: “Got up, elder, why are you  sitting there idle? The hour has come for the prophecy to be fulfilled. Run quickly. Get yourself to Him Who with release you from this life. Give the empty tombs a shake and prepare one for yourself. Put your affairs in order. He Who will release you from this present life has arrived. Emmanuel is here. Hurry to the Temple and prophesy what will become of this holy infant”.

After this, Symeon, like a man rejuvenated, flew on the wings of desire, relieved by the Holy Spirit, and arrived at the Temple before Joseph and Mary. But not before the infant they were holding in their arms. Because how or where could he get earlier than Him Who is everywhere present? But he did get there before Joseph and Mary and stood near the gates, awaiting the revelation of the Holy Spirit.

While he was in the Temple, Symeon saw lots of mothers coming in with their infants, in order to perform the purification sacrifice. Among them was she who was holding the unique child. Symeon turned his eyes to the left and the right and saw many mothers, with their familiar human appearance. Only the Virgin was surrounded by infinite divine light. He ran towards her, past all the other mothers, and shouting to everyone: “Make way, so that I can get to my heart’s desire, to see Him Who already knows me. Why are you servants competing with the Lady? Why are you offering your children at the altar? Go away from here, so that from now on you can make your offerings to this infant, Who is more ancient than Abraham”.

In the meantime, holding the Lord in the form of an infant in his arms, Symeon blessed Joseph and Mary and said to the Virgin: “Why are you observing this child, Virgin, who is and isn’t yours? Of course, you’re the same as you were before you gave birth. Why do you feed him so frequently? Because you want a healthy child? He who provided manna has no need of nourishment. Why do you stroke the baby gently and want him to sleep? He isn’t tired and doesn’t sleep, in accordance with the divine hypostasis within him. The prophet said of him: “The Lord who watches over Israel shall neither slumber nor sleep”.

Why are you observing this child, Virgin? With the divine power he has within him, he spread out the heavens from one end to the other, like a precious, leather tent covering. He hung the earth in the void and made the water the foundation for the earth. This child, excellent Virgin, directs the sun, guides the moon, provides us with benign winds. This child, Virgin, is the Lord of all, which is why you, who have heard these things concerning him, should expect not worldly but spiritual joy of him. Because, of course: “This child is destined to cause the falling and rising of many in Israel, and to be a gainsaid sign, so that the thoughts of many hearts will be revealed. And a sword will pierce your own soul too”.

Because of this, some people thought that the mother of the Lord was destined for a martyr’s death, by the sword, because Symeon said: “And a sword will pierce your own soul too”. But this wasn’t the case at all, because a two-edged, bronze sword would pierce the body, but would be unable to split the soul. This is why, to this day, the Virgin is immortal, because He Who dwelt within her took her to regions which it is impossible to reach, other than by ascension. So what does Symeon mean here when he talks of a sword? He means the pain that the Virgin would suffer, cutting into her soul, when she saw the loss of Him Who had come to find and save those who had lost their way. She would feel pain because she thought that she had lost the fruit of her virgin womb, that is her son.