The Dismissal at the Divine Liturgy

The culmination of the bloodless ritual is the dismissal, that is the exclamation on the part of the priest that denotes the completion of the Divine Liturgy and the encouragement of the faithful to leave the church. Dismissal is a compound word and means ‘to send away’. In the most ancient liturgical rites, such as those of Saint James the Brother of our Lord or Gregory the Theologian, the end of the Liturgy was expressed as a command from the deacon: ‘You are released in peace’. The dismissal of the congregation has changed since then, gradually acquiring liturgical forms, particularly in the time of Byzantium (Saint John Chrysostom and Saint Basil the Great) until it became the structure we know today.

In modern liturgical practice, the Divine Liturgy is completed with the exclamation: ‘Through the prayers of our Holy Fathers, Lord Jesus Christ our God, have mercy on us and save us’, as the conclusion of the invocation read by the celebrant. Ending the liturgy with this phrase is a much later development, as it came to be included at the end of all services under the influence of the monastic tradition. The inclusion of the exclamation at the end of the Divine Liturgy can be dated to the time after the Restoration of the Icons (843) and the simultaneous domination of monasticism, which brought a series of alterations to the parish typiko, changes based on the formal instructions of the monastic rule. 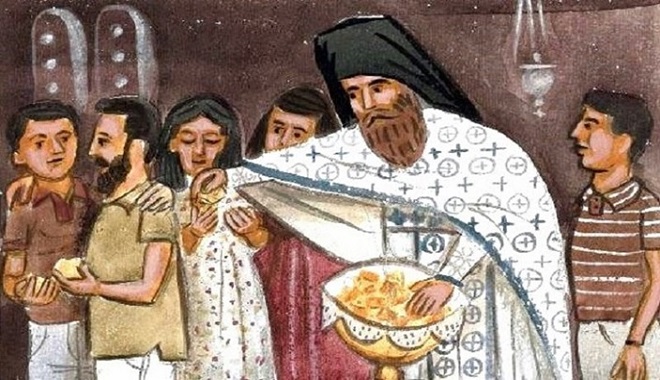 This exclamation is a purely monastic influence, since it refers explicitly to an appeal to the fathers of the monastery who are present and praying at that time in the church. According to Fr. Gervasios Paraskevopoulos, it would be proper, in the parish context, to use the older exclamation: ‘May the Holy Spirit guard and save all of you’, which would be said immediately after the dismissal of the congregation through the ‘By the prayers…’.

If we examine both exclamations, it seems that there is, in fact, no definitive or explicit end given to the Divine Liturgy, since they involve only a request for God’s salvation for us and his divine mercy. The absence of a specific dismissal denotes the eschatological course of liturgical time. Ecclesiastical liturgical time is neither straight, with a beginning and end, nor cyclical , with an eternal recycling of the same events, as some pre-Christian and non-Christian societies believe. According to Fr. Georgios Metallinos, the liturgical time of the Church is an eternal present which incorporates the past, present and future in the immediacy of participation in the divine presence. This demonstrates that time doesn’t have a beginning or end, since past, present and future all have the infinity of God as their starting-point. The progress of time has as its destination and goal the Last Times, though this doesn’t imply an ending, since life with God is limitless.

The dismissal at the Divine Liturgy is often associated with the acclamation on the part of the people: ‘Lord, preserve him who blesses and sanctifies us for many years’. In reality this forms part of an episcopal Divine Liturgy. Transferal of blessing and sanctification is the exclusive right of a hierarch. According to Saint Symeon of Thessaloniki, the hierarch alone, of all the clergy, has the capacity to illumine the faithful and to transmit divine grace, gifts which he acquired through the action of the Holy Spirit on the day of his consecration. The parish priest is acclaimed by the people as a celebrant of the Spotless Sacraments having been granted canonical permission to do so by the local bishop.

At an episcopal Divine Liturgy, the acclamation from the people is changed to ‘Lord keep our Master and Hierarch; for many years, Master’.  The phrase ‘for many years, Master’, is repeated three times. This acclamation is a combination, whose origins go back to Byzantium, to the Patriarchal Liturgies and the church of the Holy Wisdom, in Constantinople, at which the emperor was also present. The ‘Master’ here was the Emperor of New Rome and the hierarch was the Patriarch. The people acclaimed both of them and requested long-life and God-pleasing service for them. On the one hand, they prayed that the secular ruler would be strengthened in his administrative efforts; and on the other that the hierarch would receive support in his episcopal duties and would be able to fulfil his commitments as bishop without let or hindrance until the end of his tenure.

With the fall of the Empire, to the Ottomans (1453), the presence of the Emperor fell into abeyance. The acclamation on the part of the people, however, remained in liturgical use, though it was now addressed only to the bishop who was presiding at the Divine Liturgy*.

*This was due to the Ottoman system of administration. To put it crudely, each non-Muslim community within the Ottoman Empire was placed, to a degree, under the guidance of its religious leaders, the Ethnarchs, who were responsible for the community to the Turkish authorities. In this sense, then, they acquired some kind of civil authority. This explains, for example, the execution of Patriarch Gregory V on Easter Sunday, 1821. He wasn’t hanged because he was a Christian but because, in the eyes of the Sultan, he had failed to suppress unrest among the population of Constantinople (In fact he had condemned it). In modern practice, it would be possible to acclaim, say, the local mayor as ‘Master’, provided they were in good standing with the church. They would stand on the left of the isle, opposite the bishop’s throne.