The Reception of Christ: A Sign to be Spoken Against

‘Behold, this child is set for the fall and resurrection of many in Israel, and for a sign that is spoken against’ (Luke 2, 34).

This prophecy was made during the lifetime of Christ, but continues to be effective in the history of humankind and in the personal life of each individual.

As God and human, he is the fall of the unbelievers, of those who don’t believe in him; and the resurrection of those who do believe in him. One example is Golgotha. One robber believed and was saved; the other doubted and was condemned. This is true also in our personal life, since Christ falls when we who are baptized fall into fornication; and rises when we become prudent. It can also mean that Christ was to suffer and fall into death, but that many would be resurrected with him, following his own fall and resurrection (Saint Theofylaktos). 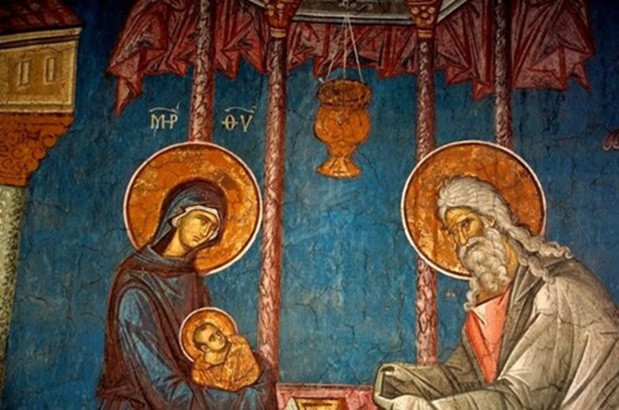 Christ is also ‘a sign to be spoken against’. The word ‘sign’ can be understood in many ways and with many meanings. In the first place, the incarnation of Christ, the Word of God, is a sign. At the incarnation, many strange and wonderful signs occurred. God became human; the Virgin became a mother. This sign in particular is spoken against and doubted by many people. Some say he assumed a real body, others that it was only apparently real and that, in fact it was merely ostensibly real and it did everything in an unreal manner. Some say that it was an earthen body; others that it was heavenly. Some believe that, as God, Christ has a pre-eternal existence and others think that he began his existence in the womb of the spotless virgin Mary (Saint Cyril of Alexandria).

In his analysis of the interpretation of Saint Theofylaktos- that the incarnation of the Son and Word of God means ‘the sign spoken against’- Saint Nikodimos says that heretics vacillate between whether Christ is God or human. Given that he has two energies, the divine and the human, they see that, as a human being, he is hungry, thirsty, accepts suffering, crucifixion and so on; while as God he performs miracles, casts out demons, rises from the dead and so on. Christians have no such doubts, because  they know from the experience of the glorified saints that, although Christ has two natures, divine and human, he is one – in terms of both hypostasis and person*. Christ, therefore, as being one and the same, sometimes acts in a divine manner and, at other times, in a human manner, although, of course, when he acts according to nature he always does so ‘after communication with the other’.

Another sign to be spoken against is the cross of Christ. According to Saint Cyril of Alexandria: the precious cross is called ‘a sign to be spoken against’. Some accept the cross  and the crucifixion of Christ, considering it to be salvation: that, on the cross, Christ overcame the principalities and powers of darkness. Others deny the cross, because they can’t imagine how Christ could be crucified. This is why, as Saint Paul says, the cross is a stumbling-block for the Jews and foolishness for the Greeks. But for us believers, the cross is ‘the power of God and the wisdom of God’. (1 Cor., 1, 23-24).

*As people our common hypostasis is that we’re human beings; our person is the unique embodiment of that hypostasis in each of us separately.