The Sunday of the Prodigal Son

God is always good and kind to everyone, more than patient with us. But He manifests His great goodness in particular towards those who are sinning. It looks as though He burdens the righteous on all sides and doesn’t give them any respite, yet He’s much more compassionate towards sinners and more easily moved to sympathy for them. He pulls them out from the cadaver of sin and brings them to repentance. The Lord says: ‘As I live, I do not desire the death of sinners, but that they should turn and live. Should the fallen not be raised? Should those who have turned away not turn back? Turn to me and I shall turn to you’. To the righteous, He says: ‘If you observe all righteousness and truth, and if you keep all my commandments and then fall into sin, I will not remember your righteousness, but you shall die in your sin’. The Lord is very strict towards the righteous, but has sympathy, immeasurable compassion and infinite goodness towards sinners. This is because, being all-wise, He knows not to frighten those who have sinned against Him, lest they fall into despair; whereas if He praises the righteous, He’ll encourage complacency. And so He shows mercy to sinners but puts His fear into the righteous, as He is terrible among the saints. 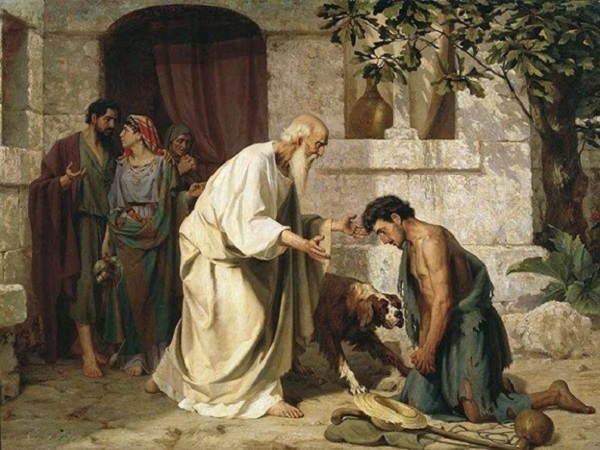 Therefore, being compassionate and seeking and desiring the salvation of sinners, He’s given us repentance as the cure and medicine. He teaches each of us the path of return and repentance through various sayings, parables and challenges, prompting us to reform. This is why today’s parable shows Him as merciful and compassionate.

There was a man who had two sons; and the younger of them said to his father, ‘Father, give me the share of the property that falls to me’. So he divided his living between them, giving half to the younger son. This parable demonstrates and manifests the power of the repentance of the returning penitent and the boundless extent of divine compassion, through which God prompts and urges sinners to repent. It calls God, Who loves the human race, ‘a father’, and both orders of people, the righteous and the sinners, ‘sons’.

Since righteousness is the oldest part and possession of human nature, this is why the elder son is called ‘righteous’, because, from the outset, human nature was embellished and dignified with righteousness, from the very beginning of its divine creation. Holy Scripture tells us that God saw what He’d made and it was very good. Because sin came later, this is why the younger son is called the sinner, since his mind and outlook were unstable and uncertain. The younger son asked his father to give him his share and the father, who loved them both equally, did so, leaving them both self-sufficient. He gave the heavens, the sun, the moon, the stars, the earth and all the things therein for the enjoyment of all, the righteous and the sinners both. Neither has more than the other: the sun rises on both equally; the rain falls on everyone; and God’s blessing and benefits which He’s given in such abundance are to be enjoyed by one and all, without let or hindrance.

The younger son saw the heavens and deified them; he saw the fruits of the earth and didn’t put them to their best use; he didn’t observe God’s law but was ill-disposed towards the righteous and God’s holy prophets. Impious and sinful, he took the sun for his enjoyment and worshipped the gift as a god. He honoured the gifts but didn’t recognize the Giver. He worshipped the creation instead of the Creator. The elder, righteous son used all of these things God made for His glory and praise. He saw the heavens and, from their beauty, recognized the Creator and Primogenitor. ‘For I will regard the heavens, the work of your fingers; the moon and stars, which you have established’. He saw the world and praised and glorified the Lord Who embellished it. The righteous, who was grateful and an indispensable servant, lauded and admired the creation and therefore magnified and glorified the Creator. The sinner, though, who was ungrateful and good for nothing, also saw [the creation] and- wrongly- worshipped it.

All of us have both reason and free will and proceed as we think best. We’re not under compulsion, and virtue or wicked dealings depend on our own inclinations. Each of us can live well, in a God-pleasing manner, since we have reason and free will. This is why we praise those who have good intentions, who do good voluntarily and freely, not having been forced to do so by others. It’s not right nor reasonable to praise those who are brought back from wickedness and impiety by force or compulsion, but it is proper to recognize those who reform of their own free will. If someone is possessed of a virtue by their nature, it’s not tested; it’s only praiseworthy and redemptive when it’s exercised knowingly. So what did the younger son do when he took his inheritance? He sold it and lived the life of a prodigal. He spent lavishly and after a few days took what was left and went to another country altogether, where he threw his money away on riotous living and all manner of transgressions.