First Discourse on the Annunciation (part 1)

Today, the ranks of the angels rejoice at the hymns being sung and the light of the presence of Christ shines brightly upon the faithful.

Today, is glad spring-time for us, and Christ the Sun of Righteousness shines all around us with a clear light, illumining the minds of the faithful.

Today, Adam is made new, and, having soared to heaven on high, now takes a place in the choir of angels.

Today, the whole of the earth is enveloped in joy, since the descent of the Holy Spirit upon us has taken place. 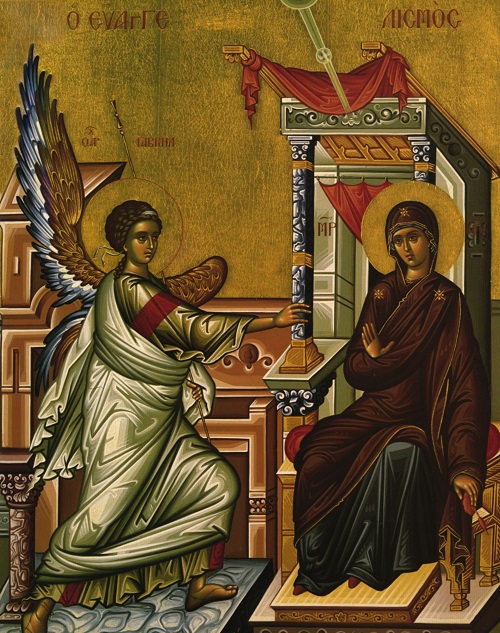 Today, God’s grace, the hope of the unseen, shines through all the miracles which surpass our understanding, and reveals the mystery which was hidden from us from before all ages.

Today, God wishes to crown the sacred heads of those who delight in obedience to Him and in His feasts. He has invited those dedicated to unswerving faith as His guests and His heirs; and the heavenly kingdom hastens to summon those whose mind is in the heavens, so that they may join in the divine service of the bodiless choirs.

Today, the word of David is fulfilled, which says: ‘Let the heavens rejoice, and let the earth be glad. The fields shall be joyful, and all the trees of the wood before the Lord, because He is coming’.

David mentioned trees, as did the Lord’s Forerunner who spoke of them as bearing fruit worthy of repentance, or rather of the presence of the Lord.

And our Lord Jesus Christ promised eternal joy to all those who believe in Him. For He says: ‘I will see you, and you will rejoice; and no-one shall take your joy from you’.

Today, the illustrious and ineffable mystery of confirmed Christians who have freely placed their hope in Christ is plainly declared to us.

Today, Gabriel, who stands by God, appears to the pure Virgin, addressing her with: ‘Hail, you who are full of grace’, causing her to wonder what sort of salutation this was.

‘The Lord is with you: do not fear, Mary. For you have found Grace with God. You will conceive in your womb, and give birth to a son, and they will call his name Jesus. He will be great, and will be called the Son of the Most High. And the Lord God will give him the throne of his father David, and he shall reign over the house of Jacob for ever: and of his kingdom there shall be no end’. Then Mary said to the angel: ‘How will this be so, since I haven’t known a man?’

‘So, I’ll remain a virgin? So, the treasure of my virginity won’t be squandered?’ While the holy Virgin was pondering all this, the angel briefly offered a summary of his announcement, saying: ‘The Holy Spirit will come upon you, and the power of the Most High will overshadow you; therefore the holy child you bear will be called the Son of God. As He is, so shall He be known to all’.

It was fitting, therefore, that holy Mary was chosen by Grace from all generations, since she was wise in everything she did and there never had been anyone to match her throughout all generations.

She was not like the first virgin, Eve, enjoying herself alone in paradise, her guard down, naively listening to the words of the serpent, the author of all evil, and thus becoming depraved in the thoughts of her mind. Through her, that deceiver discharged his poison and, mixing death with it, brought it into the whole world. And this has been the cause of the labours of all the saints.

But only in the holy Virgin has Eve’s transgression been repaired, though even she, this holy maiden, was in no position receive the gift until she’d first learned who had sent it, what it was, and who was conveying it. So it was that, while she was wrestling with all this, the holy maiden said to the angel: ‘Where have you brought us this blessing from? Out of which store of treasures has this pearl of the word been dispatched to us? What’s the meaning behind this gift to us? You’ve come from heaven, but you walk on earth. You appear to be in the form of a human person, yet you’re as radiant as a dazzling light’.

The holy maiden turned all this over and over in her mind, and then the archangel resolved her difficulties by saying: ‘The Holy Spirit will come upon you, and the power of the Most High will overshadow you; therefore the holy child you bear will be called the Son of God. And have no fear, Mary. I haven’t come to overpower you with fear, but to repel the object of your fear.

Have no fear, Mary, for you’ve found Grace with God. Don’t judge Grace in terms of nature, because Grace isn’t subject to the laws of nature. You, Mary, now know things that were hidden from the patriarchs and prophets. You, Virgin, have learned things that until now were concealed from the angels. You, Most Holy Lady, have heard things which even the ranks of the God-bearers were never deemed worthy of knowing. Moses, David, Isaiah, Daniel and all the prophets foretold Him, but they didn’t know how His advent was to come about.