First Discourse on the Annunciation (part 3)

Just as the pearl comes from two natures, from lightning and water, from the unfathomable parts of the sea, so also our Lord Jesus Christ proceeds, without confusion and without change, from the pure, chaste, undefiled and holy Virgin Mary. Perfect in divinity and perfect in humanity, in all things the same as the Father, and in all things of the same substance as us, though without sin.

Most of the holy Fathers, Patriarchs, and Prophets desired to see Him, and to be eye-witnesses of Him, but were unable to do so. Some of them beheld Him vaguely, in visions, as a prefiguration; others heard the divine voice through a pillar of cloud, and were favoured with visions of the holy angels. But only to Mary, the pure virgin, did the Archangel Gabriel come in shining light, bringing her the glad tidings: ‘Hail, you who are full of Grace’. 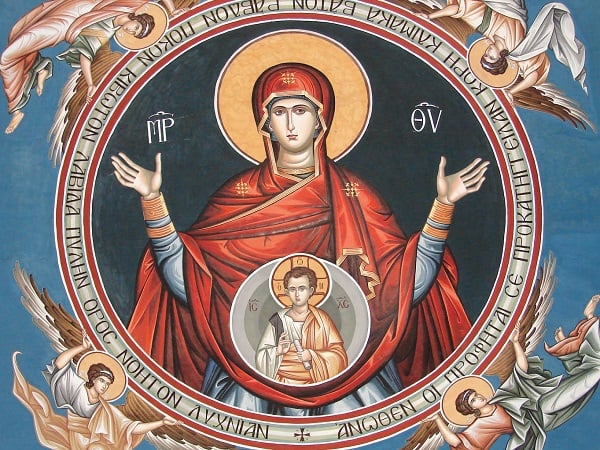 In this way she received the Word and, in the fulness of time, she brought forth the priceless pearl from her own body.

Come, then, my beloved friends, and let us sing the refrain we’ve been left from the divinely-inspired harp of David and let us say: ‘Arise, Lord, into Your rest, You and the ark of Your sanctuary’.

The holy Virgin is indeed an ark, gilded both within and without, and has received the whole treasury of the sanctuary.

‘Arise, Lord, into Your rest’.

Arise, Lord, out of the bosom of the Father, so that You can raise up the fallen race descended from our first ancestors.

David addressed these things, in prophecy, to the rod that was to spring from himself, to that fruitful flower:

‘Hearken, daughter, and see, and incline your ear, and forget your own people and your father’s house; and the King shall desire your beauty: for He is the Lord Your God, and they shall worship Him’. [The psalm, 44, 11-13 in the Septuagint, says ‘you shall worship him’. WJL]

Hearken, daughter, to the things which were prophesied about you before time began, so that you may see things with the eyes of understanding.

Hearken to me while I foretell events to you, and hearken to the Archangel who expressly declares the perfect mysteries to you.

Come then, my beloved friends, and let us call to mind what has gone before. Let us glorify, and celebrate, and laud, and bless that rod which sprang so wondrously from Jesse.

In the inspired Gospel narrative, Luke testifies not only regarding Joseph, but also about Mary, the Mother of God, explaining that they were related to David.

He says: ‘And Joseph also went up from Galilee, from the town of Nazareth, to Judea, to the city of David, which is called Bethlehem, because he was of the house and lineage of David, to be registered with Mary, his betrothed, who was with child. And while they were there, the time came for her to give birth. And she gave birth to her firstborn son and wrapped him in swaddling cloths and laid him in a manger, because there was no place for them in the inn’.

She wrapped in swaddling-clothes Him Who is decked with light as with a garment.

She wrapped in swaddling-clothes Him who made the whole of creation.

She laid in a manger Him Who sits above the cherubim, and is praised by myriads of angels.

The Word of God lay in a manger for irrational beasts, so that He might impart to us, who are actually irrational by free choice, a sense of reason.

The Bread of Heaven was placed in the eating place of beasts, so that He could provide participation in mystical sustenance for us, who live like those beasts.

Nor was there even room for them at the inn. He, Who by His word established heaven and earth, had no place. Though He was rich, He became poor for our sake and chose extreme humiliation for the salvation of our nature, out of His inherent goodness towards us.

He Who, in the ineffable mystery of God’s dispensation, fulfilled the whole of righteousness- in heaven in the bosom of the Father, and in the cave in the arms of His mother- lay in the manger.

Angelic choirs surrounded Him, singing of glory in heaven and of peace upon earth.

In heaven, He sat at the right hand of the Father; in the manger He lay, as it were, upon the cherubim. A throne in truth, and cherubic at that; a royal throne.

The holy of holies, uniquely glorious upon the earth, more holy than the holy, was the place where Christ our God rested.

To Him be glory, honour, and power, together with the Father undefiled, and the all-holy and life-giving Spirit, now and ever, and unto the ages of the ages. Amen.