Our Attitude to Scandal

The hatred of the devil towards those engaged in the spiritual struggle is well known. This hatred was faced particularly by the fathers in the desert, whose purity, not only of body but also of mind, was greater than the enemy could bear. This is why he would often circumvent the usual means of temptation he had at his disposal and, instead, suggested bad thoughts or created circumstances involving other people. He attacked them tangibly, transmogrifying into a variety of wild shapes, and conjured up terrifying spectacles in order to scare them and overcome their bold, determined attitude.

Those whose were absolutely untouched by carnal passions and desires wounded him gravely and were met with his hatred in a particular form which is indicative of his insolence. He would attack and tempt them openly with sensual pleasure. In their efforts to preserve their purity, the saints responded heroically. He would then disappear, leaving behind, as evidence of his presence, an unbearable stench in the room, which offended the sense of smell for days. By contrast, on the occasions when God’s grace entered, it left an ineffable, other-worldly fragrance behind, which gladdened the soul and senses of the ascetic. 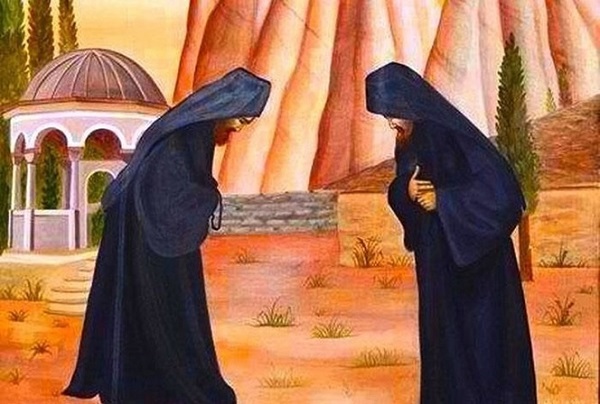 Whatever is bad stinks, which is why the fathers who had experiences such as those above, called these passions malodorous, unclean, reprehensible and so on.

If we take the physical condition of things as regards matter, we all know how odious the stench is when, for example, a septic tank is opened or when we meet the foul odor of a decomposing carcass. What sane person would want to inhale the stench of an open cesspit or hold something to scrabble round the remains of a dead animal being devoured by worms? And yet, this is what those people do who concern themselves with scandals, because of their lustful flesh, having secretly succumbed to the power of unclean passions.

The proper thing for spiritual and, indeed, all reasonable people, is to remain silent and to turn away from any such situation, because it’s a creation of the devil aimed at casting a large number of souls into the maelstrom of guilt through judging and condemning. The devil’s not so much interested in the precipitous fall of a person into reprehensible passions as he is in the opportunity to create a scandal. Typical of a scandal of such order is that it causes deep, debilitating wounds in the souls of those who aren’t firm in their faith.

Satan’s gains from such a scandal are enormous, which is why anyone who deliberately becomes an agent of the devil and harms many other souls is threatened directly by Christ: ‘Woe to those through whom scandal comes’ (Matth. 18, 7). Christ said ‘Woe’, because, as a rule, the insolence of the devil is transmitted to those who have become slaves to impure passions and brazenly act the victim. They collect and amalgamate such scandals and choose to assign blame rather than to keep quiet and humble themselves; rather than seek the cleansing of their soul through repentance and liberation from the bonds of the devil.

When we turn our face from such an unclean affair, we put up the best defence for the protection of our soul. At the same time, we can pray to our all-wise God who knows ways to send the mystical suction pipe of his love to draw out all the uncleanliness from the fallen person who created the scandal.