It’s a distressing observation but our era has forgotten God. Or rather, because it suits it, it’s turned its back on him, particularly in those places where technological progress, that is better tools or economic prosperity- usually made possible by the exploitation of the weakest- have led people to believe that they’ve become all-powerful. It’s clear that people are doing whatever they can to get God out of their lives, by deifying themselves, depending exclusively on reason and being guided solely by their desires. The mere mention of God is enough to cause, in the best scenario, a condescending, if not sarcastic smile, though it may also provoke strong reactions from those who refuse to even consider the possibility of the existence of God.

On the other hand, excessive self-confidence, trust in our abilities and an erroneous sense of independence have given rise to the idea among some people that they’re capable of discovering God by themselves. In this way, they contrive their personal dogmas and theories, so that they believe not what God has revealed but whatever their own imagination and deluded reason proposes to them. The result of this approach is just as catastrophic and demonstrates the struggle the Church is facing on two fronts: against atheism; and also against false piety, heresy and ‘personal religion’. 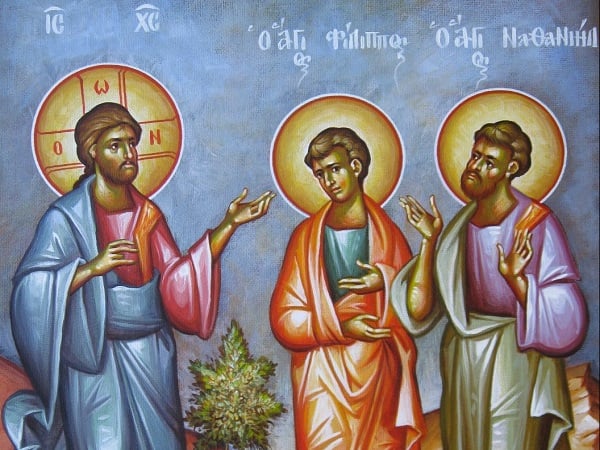 The Church, however, insists on continuing to celebrate the triumph  of the faith ‘against all heresies’. And, moreover, not only those that arose in the past, but also those which continue to exist today and any that may make their appearance in the future. The Church believes firmly in the words of the Lord that ‘the gates of hell shall not prevail against it’ (Matth. 16, 18). No matter how many antagonists arise, not matter what the ploys they devise, to the end of the age the Church will remain the safe haven for people, a harbor of salvation and a ladder to heaven. History has shown this to be the case.

The Gospel reading concerning the call of Nathaniel highlights experience as the best way to find faith. It presents the example of the Apostle Philip who, although he was ready and willing to be numbered among Christ’s disciples, was reticent to do so. The Lord made it easier for him and called him to be his disciple. Once he’d agreed whole-heartedly, he thought about his friend, Nathanael. As soon as Philip had had personal experience of Christ, he lost no time in becoming an advocate for him. In this way, we, too, learn that we can’t keep something beneficial to ourselves, but have an obligation to pass it on to others, so that they can share in the benefit.

Nathaniel, in good faith, doubted what Philip told him, because he wanted to confirm it from what he’d been taught in the faith of his fathers. Philip then gave him the best possible answer: ‘Come and see for yourself’. Come and experience. Come and look into it and you’ll see. So it’s clear that an apprenticeship in the faith is the start of our real spiritual life. How many people have begun to read Holy Scriptures with the aim of finding fault with them have ended up as their most active proponents?

When Nathaniel arrived at his meeting with Christ, the Lord addressed him by saying: ‘Behold, a true Israelite in whom there’s no guile’. Nathaniel was at a loss to know how Christ knew him and the Lord answered that, before Philip had called him, he’d seen Nathaniel sitting under a fig tree. This was enough for Nathaniel to confess: ‘You’re the Son of God, the king of Israel’ and to become thereafter one of the most ardent of the Lord’s disciples.

What, then, are we to understand from this pastoral example of the Lord’s? That even though he knew the reservations and objections of Nathaniel, he didn’t become angry, he didn’t act as though he wanted to rebuke or punish him. He simply waited… He waited for experience and prayer to mature in the man’s soul in order to illumine it and kindle the flame of faith, so that Nathaniel would be able boldly to pass on the Gospel message to those willing to receive it, wherever they were. This is the way God acts. It’s the art by which he brings our souls into his net: by enabling us to escape the world so that he can bring us into his heavenly kingdom.

Many people are angered by the apostasy of people and the distortion of the faith which seem so prevalent today. But the Church is Christ’s and he governs both it and the world. He knows when people are ready to confess him as their Lord and God. He doesn’t pressure, doesn’t compel, doesn’t force. As our Father, he waits, asking us to continue to work with him in effecting the return of our brothers and sisters and avoiding any action on our part that might jeopardize their progress towards him.