‘Between two robbers, your Cross was like the scales of justice. One was taken down into Hades because of his blasphemy; the other was relieved of his transgressions and recognized God. Christ our God, glory to you’ (Hymn of the 9th hour during Lent).

1.The image presented by the hymn has a historical basis: Christ was crucified on Golgotha, between two malefactors, at the time when the Roman governor in Judea was Pontius Pilate. As a malefactor himself, Christ accepted the most humiliating death known at the time, that of the cross. What do the Gospels tell us of the event? One of the robbers mocked Christ and blasphemed against him. He insulted him, he doubted him and was unable to show a trace of sympathy for someone undergoing the same suffering as he was, even just before the death of them both. ‘If you’re the Son of God, as you say you are, get down from the cross and save yourself and us’. 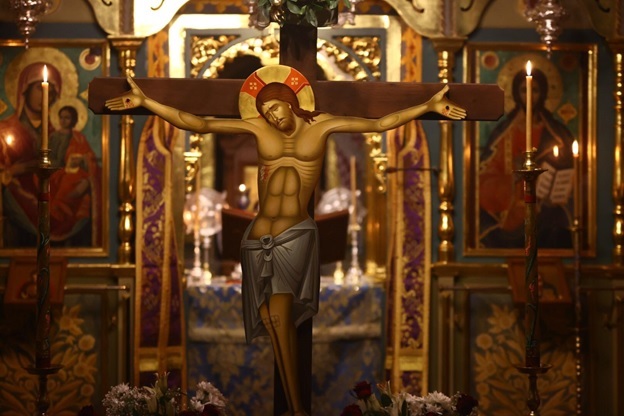 The other, who has gone down in history as ‘the grateful robber’ and has been canonized by the Church, acted unexpectedly. It was as if his eyes, the eyes of his heart, had been opened and he was granted the grace to recognize that the person being crucified with him was no ordinary man but rather was God himself in the form of a man, the Savior of the world. And it’s true that, by God’s grace, we’re able to see beyond appearances and identify the profundity of life, the eternal element in it. The grateful robber’s understanding of the events was diametrically opposite to that of his ‘associate’: one blasphemed; the other spoke to God. ‘Remember me, Lord, in your kingdom’. And Christ’s answer to him was: ‘Indeed, I say to you, today you will be with me in paradise’.

3 a) The one robber, then, is a blasphemer because he’s unable to fathom who is on the cross beside him, which means that, even though he’s met Christ, he remains blind towards him, literally engulfed in spiritual darkness. According to the word of God, the cause of this blindness is the stubborn refusal to abandon the wickedness of life. People who resolutely maintain their sinful, egotistical way of thinking leave not the slightest chink in their soul that would allow a ray of God’s light to pass through and enable them to locate the center and source of their life. Isn’t this what Saint John the Theologian says at the beginning of his Gospel? Why did so many people at the time not accept the Lord? ‘For their works were wicked’. To put it another way, deniers of the faith aren’t those who can’t be convinced intellectually, with reasoned arguments or terms of theory. If such people are genuine in their search, then, at some stage, they’ll find the path to faith. Deniers are those who don’t want to disentangle themselves from their passions and sins. In such a case, they deny God and therefore blaspheme against the Holy Spirit, which is what we see in the denial of the robber. And the hymnographer makes a very pertinent point here: that this blasphemy places a great weight on people’s souls. ‘One was taken down to Hades because of his blasphemy’. This is the tragic state of this particular, wretched robber, but also of everyone who wishes to expunge Christ from their life. They think they’re free to do whatever they want but at the same time they’re actually tumbling towards the worst disaster which could possibly befall them: the descent into hell (‘hades’ and ‘hell’ are used interchangeably in Scripture). What is the main feature of this hell? It’s the impossibility of any relationship with another person, or even with yourself. People in hell can’t ever be at ease, nor find contentment with others or themselves. Because they couldn’t find it with God. God is the basic factor on whom any relationship with another person depends. So the pattern which functions as a motif at all times and in all places is: disbelief in Christ, blasphemy, unbearable burden on the soul, hades and hell, utter despair.

3 b) On the other hand, the grateful robber became a theologian because he was enlightened and believed in Christ. The truth was revealed in his heart and he was thus able to come to know God. In our faith, knowledge of God has nothing to do with intellectualism. It doesn’t come as the fruit of some information that’s been heard, nor from study or from scientific enquiry. God reveals himself in people’s heart, that is the depth of their being, which is why our relationship with him is heart-felt. Even in the Old Testament we hear God calling: ‘My son, give me your heart’. Despite the fact that he was steeped in sins and offences, it’s clear that, in the depth of his soul, he hadn’t been entirely altered. Something clean and pure still remained there. When he was given the opportunity to meet Christ, he seized it. The living presence of Christ touched his heart, he became contrite, he was wounded by the Lord’s love, which is why he burst into tears of repentance, and this opened to him the gates of paradise. As the verse of the synaxari [at Matins] for Great Friday* puts it: ‘The robber inserted the key into the locked gates by saying “Remember me”’. Antiphon 14 in the same service also says: ‘He let out a small cry and was the first to open the gates of paradise and enter’. The Lord himself said that repentance is the realm of sanctity, the state which produces ripples of joy throughout the heavens. ‘There is joy in heaven over a sinner who has repented’. This is the strange thing about Golgotha: on the one hand, the Lord is in pain over ‘taking away the sin of the world’; and on the other, he rejoices because he witnesses the first citizen of paradise, who found his way there on the cross.

So, according to our hymnographer, the characteristic of the theological language of the grateful robber is the experience of the remission of his sins. The robber saint felt that he’d been relieved of the burden of what had been his blasphemous life until then, because he’d turned to the sun of glory, who was beside him. This sense of forgiveness as an experience of the grace of the crucified Lord is the only basis on which anyone can theologize. We might say with certainty that the saved robber ‘saw’, in the Spirit, Christ taking upon himself the sins of everyone. In other words, he had a ‘vision of God’, which Christ permits to those souls who are in kinship with him. And, as we’ve said, they’re in kinship, not because they’re without sin, but because they’ve reached the point of genuinely repenting. Their hearts echo the beat of his own, which means that they feel something of his love.