The Remission of Sins (2nd Sunday of Great Lent)

What is it exactly that the Gospel for this day [Mark, 2, 1-12] tells us? That we should do everything, the impossible, in order to draw close to the Lord in our lives and in our experience of the cross. We must overcome every obstacle, every sin that takes over our human nature and rejects our relationship with him. We should approach him and ask the most important thing, what he himself thought was of prime importance: the forgiveness of our sins, so that we might be cleansed and come to meet him. It’s clear from today’s Gospel that the remission of sins, so that grace may come, has to precede any healing of the suffering body. The paralytic in today’s Gospel is a case in point.

The four men who were bearing the corners of the pallet tried to bring him close to the Lord, who was inside a house that was packed to bursting, with even more people on the outside. There was no way that the men could forge a passage through the crowd and bring the man to Christ. But they didn’t give up. They didn’t turn back. They got themselves up onto the roof, broke through the ceiling and lowered the sick man down to Christ. 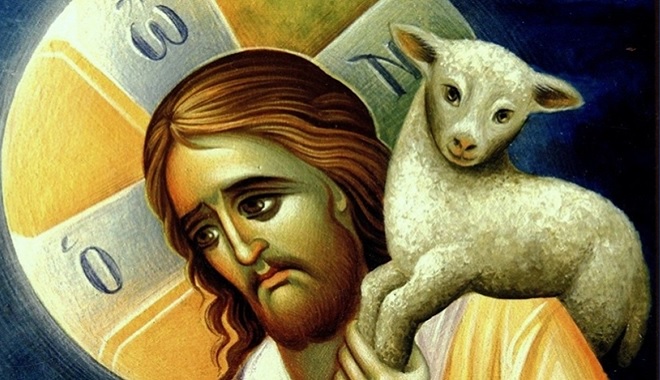 This effort was a spiritual action, well-pleasing to God, the fruit of faith which overcomes all hurdles and human considerations. This faith is an inner force, the fruit of a transcendent relation between the person who believes and the God in whom they believe. It’s practical faith, which is accompanied by love for God. And love constitutes life, as a relationship and communion with him. It looks upon the good things of the future as being already present and is the fulfilment of this relationship.

It is with this faith that believers set out on the spiritual journey of great Lent, in order to encounter the Lord, to become sharers in his sufferings and his cross. They do this through the spiritual efforts ordained by our holy Church, the final aim being to receive God’s grace.

The only thing that can hinder our efforts to grow closer to the Lord and develop a relationship of love with him, is our own self, our sinful passions, our lack of faith and our slothfulness. These are the obstacles that cover the roof of our soul and which have to be removed if we’re to came close to Christ. Bodily ailment is no impediment to the spiritual struggle. In the case of the paralytic, it became the reason for his approach to the Lord. Trials, pain of the soul and also of the body, sorrows in general, very often work for our salvation, because they help us to feel our inadequacy and our need to flee to God.

How does Christ evaluate?

The Lord saw the faith of the paralytic and his bearers and blessed it. Everyone was expecting that he would first heal the man’s body, but Christ acted differently. He first healed the soul. He released it from the paralysis of sin which had been keeping the man from God and was the cause of all his woes. ‘My child, your sins are forgiven you’, he says. He calls the man his child because he’s granted him the grace of spiritual adoption, and also because the new cleanness of his soul, after the remission of sins, has brought him into a relationship with God. It’s made him a son of the heavenly Father by grace. Thereafter, Christ also grants the man healing of his body and the strength to pick up  his pallet and return home.

Unlike the scribes mentioned in this Gospel reading or most people who regard others as external forms, as bodies, Christ first heals the soul, which was the first to fall from God’s grace and was then followed by the body. In other words, sickness of the body came after sickness of the soul, which is sin. Once the soul believed, that is, when it was restored to its proper relationship with God, it was healed, as was the body.

So the message of the Gospel reading is the same as that of Great Lent, or rather, Lent is the experience of the life of the cross and resurrection as described in the Gospels, and it’s to this that it directs us. To put it differently, all sin is a paralysis and a deadening of the soul and prevents it from approaching closer to Christ. Repentance brings death to sin and life to the soul. Remission of sins is granted only by Christ, both to the paralytic and to each one of us. Today, this forgiveness is given to us through the Church at the sacrament of confession, always in the presence of the Holy Spirit. The clergy are granted the Holy Spirit on their ordination, and when they act as confessors, they become instruments of the Spirit, in terms of remitting sins. As we’ve said, through the forgiveness of sins and the bearing of the cross of the spiritual struggle in order to lead a God-pleasing life, the covering of our soul, the passions, are lifted and we draw closer to Christ, because we’re crucified with him and rise with him. We approach him through our participation in his cross and resurrection. We rediscover our relationship with him and become children by grace of our heavenly Father, as did the paralytic.

The reaction of the scribes and Pharisees, however, was opposed to this spiritual effort to draw closer to the Lord and was diabolical.

The Pharisees didn’t want Christ, they didn’t feel any necessity for him, because, in their minds, they were self-sufficient. Their hearts were tainted with the passions of selfishness and arrogance. They thought they knew everything about everything and judged Christ with their nefarious sense of reason. They doubted everything. They heard Christ but didn’t obey. If he did good, they thought it was bad. For example, when he forgave the paralytic, this was an act of blasphemy as far as they were concerned. They thought ‘What he’s saying is blasphemy’. They didn’t recognize in Christ any right to forgive sins. And even if they had, they’d have thought it was of no consequence, since what mattered first and foremost for them was the healing of the body. They considered curing the body more important and believed that Christ was unable to perform this and that he then had recourse to ‘forgiveness of sins’, which isn’t apparent when it happens. For them he was a normal man who deceived other people. But Christ saw their hidden thoughts, which is something only God can do. As the Evangelist says, the Lord asked them: ‘Why do you question thus in your hearts?’

All the sinful passions begin with unclean thoughts, which are directed by the devil.  They can be cleansed when we become aware of our sinful state and ask for God’s help, ‘in the name of Jesus Christ’. If we’re humbled, mourn, repent and acknowledge our sins at the sacrament of confession, we can receive God’s grace. The Pharisees, however, never believed in their sinfulness, because they were in thrall to ‘their father, the devil’, as Christ told them. They lacked God’s grace, which is why they forever functioned in the darkness of human self-sufficiency, arrogance and conceit. The whole of the spiritual struggle consists in the cleansing of the heart, and this is the message of Great Lent.

May we welcome this message, so that we’re able to make the journey ‘from death to life’, as our crucified and risen Lord showed us.