The Sunday of Forgiveness

When man finds his deep heart and turns it entirely and unwaveringly towards God, the Lord makes it bring forth fruit by the incorruptible seed of His Word; He seals it with His wondrous and almighty Name and illumines it with His continual and charismatic presence. He makes the heart become a temple of His Divinity reflecting His form like a mirror and resounding with His love like a harp, bearing His Name and becoming the servant of His will. Deprived of the living sensation of God, the heart atrophies; it gradually becomes hard as stone and lifeless. It merely performs its role as a muscular pump that sends blood to the members of the body, and man thus becomes useless for God and His eternity. The closed and hard-hearted man has no hypostasis, no existence before God. Whereas when his deep heart is quickened and aflame with a divine sensation, man becomes a profitable servant, precious in the sight of God.[1] The heavens hearken attentively to the voice of a heart that thirsts for the living God.

The disposition to forgive is the best preparation for man’s standing in prayer before God. It renders the heart gentle, soft, fit to abide constantly in contact with the energy of God and be renewed thereby. For this reason, just at the beginning of the Lenten Season, the immaculate Church asks her children to forgive one another so that their hearts may awaken and be delivered from the grievous shackles of sin and the passions. In this way, they will be able to collaborate with God in the work of their own regeneration. Otherwise, if man’s heart remains closed, God turns His face away from him. As a result, all the ascetic struggle of prayer and fasting is annulled and cannot lead to the grace and joy of the Resurrection. 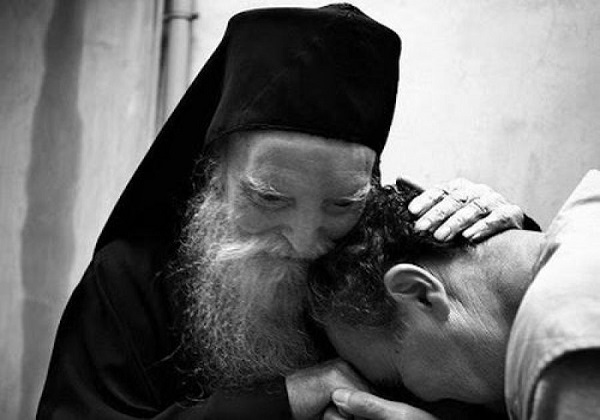 In the Sayings of the Desert Fathers, there are accounts about monks who were negligent in their ascetic duties. However, because they never judged their brethren and were always ready to forgive, they found salvation. Saint Makarios of Egypt was considered a god on earth, not because of his ascetic struggle or his miracles, but because just as God covers all the earth, so also he covered the weaknesses of the others, and he lived as if he saw not that which he saw and as if heard not that which he heard. Often people face difficulty in the labour of fasting because of physical weakness or infirmity. Yet, if they watch their thoughts and do not judge, but also eagerly forgive the wrongs of the others, they are saved freely.

Fasting has great value because it is done in obedience to the precept of the Church, thus preserving the Christian’s unity with the other members of the Body and making him a partaker in their gifts. Moreover, the physical weakness caused by fasting begets pain in the heart. If man has the wisdom to transform this pain into spiritual energy for his converse with God, his prayer will receive wings.

Forgiveness is the first step of the ladder of virtues and perfection depicted in Great Lent, and it prepares man for his passage from death to life, for his entrance into the unspeakable joy of the Resurrection and the Light of the eternal Kingdom. The Lord Himself enjoins mutual forgiveness because without it man cannot converse with God face to Face. It is the only way for the heart to open to the grace of God. One of the petitions of the prayer that the Lord taught to us Himself, is: ‘Forgive us our trespasses as we forgive them that trespass against us.’ Forgiveness is indispensable for man’s standing before God in prayer, but even more so for his presentation in the Divine Liturgy. When man sincerely forgives all things, then his heart becomes light and, to the sanctification of prayer and of the word of God, he adds the sanctification of the Sacrament of the Body and Blood of Christ.

God searches the hearts of His servants. If man says with his mouth, ‘Forgive us our trespasses as we forgive them that trespass against us,’ but in his heart he harbours displeasure, negativity, hostility or resentment, it is as if he were saying to God: ‘Can You see my heart? It is not able to forgive. Therefore, neither forgive my sins.’ Through the commandment to forgive one another, God condescends to man’s level and, as if He were equal with him, He humbly says that if we forgive, we will also be forgiven, of course, if we forgive from the heart. Is it not then foolishness and naivety to refuse to forgive the minor, relative and limited transgressions of our neighbour, when we know that in so doing, we will receive forgiveness for the many and grievous crimes of a whole lifetime, which have offended the blameless love of our Creator?

Man has all his being on loan from God. Yet, together with his great debt to His goodness, man also carries the infinite debt of his betrayal against the love of the Father. From the moment sin entered his life, most of his works are blameworthy, imperfect, sinful; they are debts to God. Who can claim to be absolved of them? Every passionate impulse, every thought that grieves His Spirit, every negligence, is a debt.

We find concealed in the commandment to forgive, the desire God has to exchange His life for the life of His creature. Man’s life is the content of his heart, and if he offers it wholly to God, then He will give him all that is His.[2] What an unequal exchange, yet full of such tender love for man! Therefore, man’s readiness to forgive, which is the condition for his reconciliation with God, is in no way a harsh obligation, but rather a token of the Lord’s searchless mercy, granting him all the eternal treasures of the heavenly Kingdom.

God also commands us to forgive because without forgiving, it is impossible for man to restore peace with his fiercest adversary, his conscience. Following the paradoxical inverted perspective of the Gospel, the Lord does not merely command that man should seek forgiveness and reconciliation when he himself is to blame, but also when his neighbour, either rightly or wrongly, was grieved because of him.[3] Only the humble love that forgives all gives man the boldness to offer his gift at the altar of God. Furthermore, humble love renders his sacrifice acceptable.

Consequently, it is not enough for man to forgive the faults of the others. He also needs to ask forgiveness for his own wrongs, both voluntary and involuntary. Neither is it enough for a Christian to find grace in his prayer. He must also co-work with the Lord and become an instrument of His Providence, so that grace may be extended to all those with whom he comes into contact. Thus, asking forgiveness becomes a way of imparting grace. Especially when man asks forgiveness from a brother who is grieved with him, even though he has not wronged him, the humility of this gesture can touch the heart of the brother, and a process of renewal can begin in his life. Then the man who humbled himself and asked for forgiveness becomes God’s co-worker in the regeneration of his brother.

The Only-begotten and Beloved Son of God offered Himself as a sacrifice and became for man redemption, sanctification and salvation. When man accepts Christ’s intercession and forgives his brother from the heart, he comes to possess the fruit of His incomprehensible Passion, the remission of his transgressions, reconciliation with the Father and eternal salvation. On the contrary, when he closes his heart and does not forgive others, it is as if he renders void the sacrifice of the Cross; he annuls Christ’s mediation as ‘the Saviour of all men’.[4] Mutual forgiveness prepares the heart of man to acquire as its content the grace of God’s remission of his sins, whereby his brother’s life becomes his own life. Yet the life of God also becomes the content of his heart. And the prayer of forgiveness opens and enlarges the heart of the Christian to love both God and neighbour to the end. By fulfilling the commandment to forgive, man is given the possibility to grow into a perfect hypostasis in the image of the hypostasis of the New Adam, Christ, and encompass the whole of heaven and earth throughout all ages.

In other words, forgiveness does not only open the heart of man but prepares it to become the wondrous dwelling place of God, so that strengthened by the love of Christ, he may bring all mankind before God in his prayer of intercession. The Christian is called to begin with small labours of asceticism, by forgiving the minor sins of his brother. Yet the end of such labours is the divine measure which man acquires when he becomes one with the Spirit of God and the state of Christ is imparted to him, for then he inherits the indescribable gift of divine adoption.

Certainly, to forgive the sins of the others surpasses fallen human nature. According to the narrow human reason, the disposition to forgive appears to be weakness and folly. Yet divine justice differs from human justice as light differs from darkness. God’s justice is His humble and blameless love to the end that forgives all things. Christians derive strength to resist the patterns of this world and humble themselves by forgiving and asking forgiveness, from the example of the Lord Who prayed on the Cross, at the hour of His extreme humiliation and self-emptying: ‘Father, forgive them for they know not what they do.’[5] Indeed, if Christ had not uttered this word, repentance, as well as any reconciliation with God, would be impossible for man.

During Great Lent, God honours the members of His Body with the privilege of renewing their lives. This period is meant to be a presentation in prayer before God in repentance and voluntary spiritual mourning. However, the Lord gives in return the incorruptible consolation of His Spirit, abundantly, ‘not by measure’,[6] and fills the hearts of His faithful servants with His spotless love, the only love that bestows upon us life and resurrection.