a) Joseph the Fair leads the chorus of those celebrating God’s condescension in going to His voluntary passion, an event of universal significance. In his person, the Gospel messages of reconciliation, forgiveness, restraint and purity of heart find their application. He may not have heard the dulcet proclamation of love for one’s enemies; he may not have known personally the lambent Bridegroom of the Church, Who inspires service, sacrifice and honourability; he may have lived hundreds of years before Him. None of this, however, prevented him from proving to be a man of God, an evangelist before the Gospels were written, a man of restraint in lax times, an obedient disciple before the appearance of the Master. 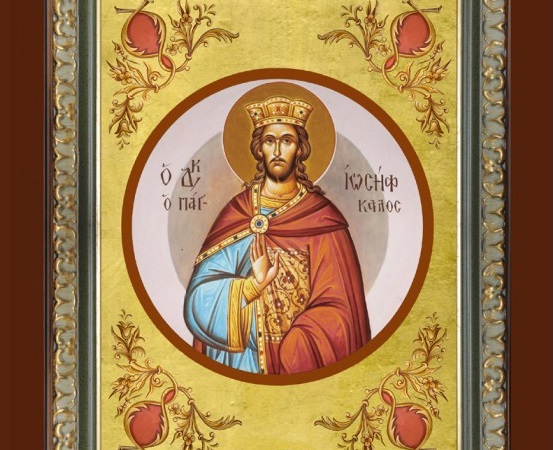 b) Joseph is a model, a prefiguration and portent of Christ in the Old Testament. The writer of Genesis (39, 6), tells us that “Joseph was fair of form and most handsome of face”, a man who proved to be a person of great distinction, in whom external comeliness and inner illumination combined to the best advantage. When we think of Joseph, the intellect is drawn to the enthralling Bridegroom of the Church, Who is “fairer in beauty than all others”, Who invites to a spiritual repast all those souls who hunger and thirst. And, indeed, Great Week is a spiritual meal in which everyone has been invited to partake. But only those who have a “wedding garment”, tears of repentance and fear of God eat their fill of the spiritual fare.

c) Christ “committed no sin, nor was there any guile in his mouth” (I Peter, 2, 22), and the same was true of Joseph who bore himself with honour before the God of his fathers and before other people, too. And although the temptations of wantonness and revenge must have been particularly alluring in his case, Joseph, who was adorned with mature restraint, neither tainted the honour of his master, nor sought revenge on his brothers who had sold him into slavery. The Egyptian wife of Potiphar, the Pharaoh’s chief cook, may have seen him as an object of lust, but he did not surrender to her passion. With unshakeable resolution, “he fled sin and was not ashamed of his nakedness, in this like our ancestors before their disobedience”.

d) He paid a high price for his honourable behaviour, though, since he was hauled off to prison. But there, too, the grace of God accompanied him. As Saint Nikodimos writes, this became the occasion for him “to interpret the dreams of certain royal prisoners, and they took him out of prison and he showed boldness before the king and became lord of the whole land of Egypt”. Despite the unfavourable circumstances, Joseph followed the will of God faithfully and his own pure conscience. Because, although his brothers had sold him, motivated by envy of the love his father bore him, as “Lord of the land of Egypt” he not only welcomed and supported them in their time of need, but even considered his being sold to the Egyptians to be the will of God.

e) Joseph the Fair is followed in the spiritual chorus by the wise virgins who bear brightly-lit lamps, having filled them with oil, that is, the divine virtues. Then come the faithful women disciples, the harlot, and the grateful robber. Faithful worshippers in Great Week might well ask themselves what to admire first in this spiritual chorus, this godly band. The vigilance and alertness of the five wise virgins? The tears and sighs of the harlot? The repentance of the robber? The boldness and courage of the women disciples? All of them are an inspiration. All of them conceal the shoots of the life in the Spirit.

f) Following Christ to His voluntary passion and completing the great chorus are the frightened, shaken and apprehensive disciples, who, although they had been introduced into the mystery of the cross by the Lord Himself, were overcome and scandalized by the events. Judas betrayed his Master and was lost in Satanic isolation and the passion of avarice; Peter denied the Lord; other disciples were dazed and others were scattered “like sheep without a shepherd”. It needed tears of repentance, the lustre of divine love, and the experience of the resurrection for the disciples to re-establish- as apostles now- full communion with Christ the Giver of Life.

g) There are others, too, who didn’t simply gaze on the events “from afar”, but condemned the benefactor as a criminal, the law-giver as an outlaw, “the King of all” as a criminal.  And these are not only the Scribes and Pharisees, they’re the deniers and the affectedly pious throughout the ages who judge and condemn everyone else but don’t lift a finger to enter His kingdom themselves. Because of their callousness and arrogance they can’t love God or their fellow human beings and so remain outside “the bridal chamber of Christ the Saviour”.