Folk Traditions for the Resurrection and Lazarus Saturday

The Raising of Lazarus

Lazarus Saturday is dedicated to Poor Lazarus, his death and resurrection. It’s a portent of the death and Resurrection of Christ, which will be celebrated the following week. According to Saint John’s Gospel, Lazarus was a friend of Christ and died in Bethany:

In the town of Bethany
Martha weeps and
So does Mary for their brother, Lazarus
The faithful friend of their hearts 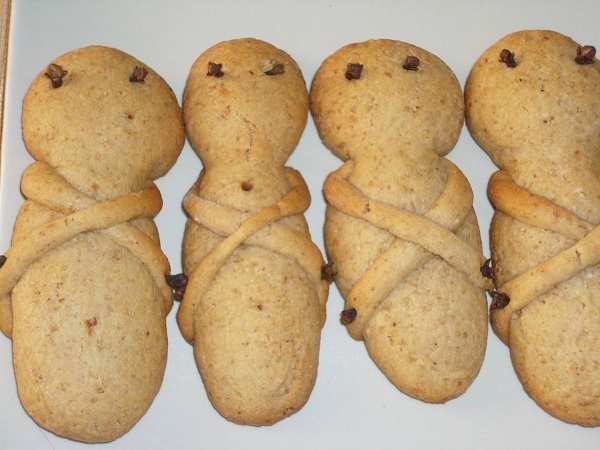 Then after four days, Christ raised him in order to demonstrate the victory over death and to prepare the ground for His own Resurrection. Tradition says that Lazarus was so terrified by the Underworld, that he never smiled again in his second life:

I saw fears, I saw terrors
I saw torments and pains.

The ‘lazari and the lazarika’

For this particular day, women baked cookies (biscuits) in the shape of a man wrapped in a shroud, as was Lazarus, and these were called ‘lazari’, or ‘lazarakia’ or ‘lazonia’. The children would make their way from house to house in groups, singing the ‘Lazarus carols’ and holding a ‘lazaros’.

Usually the lazari were a mallet, a spindle or a reed, tied cross-wise, perhaps a doll, decorated with bright flowers, multi-coloured cloths and ribbons. Of course, this didn’t exhaust the inventiveness of the children, which was given free rein.

In Cyprus, Lazarus was represented by a child, covered with yellow flowers so that not even his face was visible. When they started to sing the Lazarus carols, he would lie on his back and pretend to be dead. When they reached ‘Lazarus come forth’ the child jumped up. This custom resembles Adonis in ancient Greece and the events at the relevant festival.
As a reward, the children received various gifts: eggs, fruit, or whatever else was available.

All churches were decorated with branches of palms, bay, myrtle or yew- whatever was to be had in each place. They were collected from the woods and creeks by the newly-married women in the village. These were handed out to the faithful and the custom was completed with the ‘palm beatings’, light blows which the other women gave the newly-weds. This was believed to transfer the power of fertility contained in the sap-filled branches. This power could also be conferred on animals, which is why on the island of Skyros, these were also beaten with palms, so that they would multiply. These branches also had the power to cure ailments and to drive evil from the house. Housewives would hang them from the iconostas in the home and waft their smoke over their children to prevent the evil eye.

The palms also got rid of fleas, lice and the other bugs which arrived with spring. As they made their way home from church, holding their palm branches, the housewives would sing:

Inside palms and joys
Outside fleas and lice!

In Lesbos, the children in each parish made a bundle of bay twigs and decorated it with red and green pieces of cloth from a new skirt. At the top, they placed a little bell, so that it would ring and make a noise. When church finished, the children would make their way home. They would sing a hymn then strike the bundle on the ground three times, saying

Out with you fleas and mice, into the deep thicket

Then they would cut a twig and give it to the lady of the house with their best wishes. They’d be given an egg for their trouble. In this way, the bugs were expelled and the master and mistress of the house were guaranteed strength and health. On Palm Sunday, the Lenten fast is relaxed, because the Church wishes to honour the triumphal entry of the Lord into Jerusalem. So those who are fasting can eat fish.

The last sentence is not strictly correct. In fact, Lazarus Saturday and Palm Sunday fall outside both Lent and Great Week, and so, technically, are fast free. However, in order not to break the general fasting period so close to Easter, the Church imposes another, two-day fast, with a dispensation for fish on Sunday [WJL].