Today’s Gospel reading describes what is known as Jesus’ triumphal entry into Jerusalem. From the whole of the narrative it’s clear that the entry into the holy city by Jesus is a triumph for the Church. It’s only through the faith and guidance of the Holy Spirit that this entry of a prophet persecuted by the leaders of Israel became a triumphant transition of the Messiah into his glory.

The excerpt gives the impression of a diary of the movements of Jesus and those around him. The ‘next day’ is 10 Nisan, i.e. a Monday. The news of Jesus’ arrival in Jerusalem aroused the spirits of the provincial, – particularly Galilean- visitors who retained a more fervent hope in the Messiah, even more so since the Passover [15 Nisan], with its commemoration of the deliverance from the enslavement in Egypt, would provide the required foundation. The residents of the holy city were more conservative, both because of the presence of the religious leadership, which did not look kindly on the revolutionary notions of the people, and also because of the bloody clashes which had occurred there from time to time and had resulted in the deaths of dozens of residents. It was to be expected, therefore, that it was only the inhabitants of the provinces who were seized with enthusiasm. They were in Jerusalem to celebrate the Passover, and, as soon as they heard that Jesus was near, ‘they went out to meet him’. 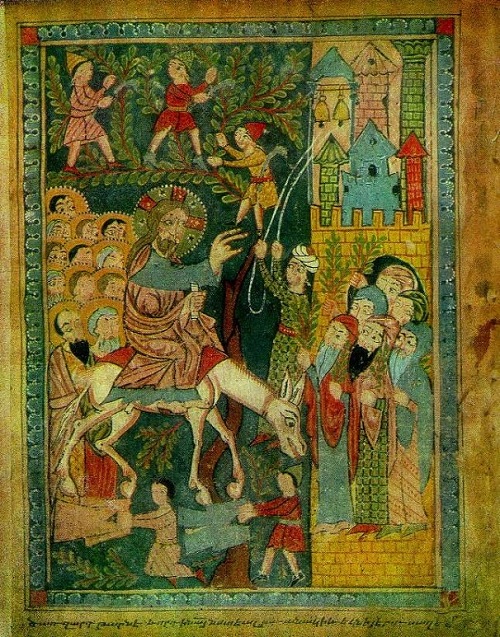 The whole scene resembles modern receptions of popular leaders. People had palm branches which they waved, as they would at the parade for a victorious general. But, because in Jerusalem, neither in antiquity nor today, palm trees don’t grow, the palm branches came from the festal bunch of flowers (lulab) with which people provided themselves at the feast of the Tabernacles and then kept at home. The presence of the palm branches lent a festive atmosphere to Christ’s reception, because palms were a symbol of triumph in antiquity (see 1 Mac. 13-51; Rev. 7, 9). It is quite proper for us to use branches of laurel on Palm Sunday, because the symbolism corresponds exactly with that of palms.

The triumphant atmosphere was completed by the cries of the crowd, which expressed the fact that the people were placing their hope in the person of Jesus. The demonstrators shouted the verse from the Psalms: ‘Save now, I pray, Lord… Blessed is he who comes in the name of the Lord’ (117 [118], 25-26). ‘Hosanna’ is translated as ‘save now’ and expresses the intense hope of the people and their appeal to the Lord for deliverance. The cry ‘Hosanna’ resounds as a despairing call for help from people in danger of drowning, and is similar to the ‘Lord, before I am lost at the end, save me’ in the Triodio. The people of Israel were expecting to be liberated by Jesus. In his person they saw a man sent by God, the king of Israel. The salutation addressed to him by the crowd wonderfully expresses the Messianic expectations of the time, the nationalist aspirations of the Jews who were awaiting a king that would liberate the country from Roman occupation and restore the kingdom of David.

The royal office of Jesus didn’t meet these expectations in full, as the Evangelist goes on to explain. Jesus didn’t enter on horseback, as did the kings of old, in order to lead his people on a victorious campaign against the enemy. He came seated on a donkey, as a peaceful leader, someone humble and of no importance in the world. The cries of the crowd were in contrast to the new reality of the peaceful leader of the Church, which agrees with the prophecy in Scripture. ‘As it is written’, doesn’t mean that Jesus’ life necessarily had to fulfil prophecies, but that his life made plain the true sense of the prophecies in the Old Testament.

The prophecy is a combination of the passages at Isaiah 40, 9 and Zechariah 9, 9, or refers only to Zechariah, with a slight alteration of the text. The prophet describes the Messiah as being a peaceful and humble leader, in contradistinction to the warlike military kings of his time. The power of the Messiah doesn’t depend on arms and horses, nor does it aim at the establishment of a powerful earthly kingdom. On the contrary, the Messiah is weak, in worldly terms. But his work will succeed, the prophet maintains and there is no reason for the people of God to worry. The Messiah will restore the Kingdom of God because he comes from the Lord and brings the kingdom with him.

The real meaning of the prophecy and its fulfilment in the person of Jesus was not recognized, that is not understood and received, by the disciples, except for the fact that ‘Jesus was glorified’. Jesus’ glory isn’t worldly success but the Cross and Resurrection, as Saint John’s Gospel makes clear. Seeing the Resurrection as glory, the Evangelist links it to the outpouring of the Holy Spirit on the disciples. In terms of significance, the Cross, Resurrection and Pentecost coincide. Illumined by the light of the Resurrection and enlivened by the breath of the Comforter, the disciples were later able to recognize the Scripture. Saint John stresses that it’s not human reason nor theological investigation, but the life-giving grace of the Holy Spirit, bestowed by the ‘glory’ of Jesus, that is the necessary requirement for any understanding of the events and of the life of Jesus on earth. It’s only in this way that empirical reality can attain to the truth which saves us. Mere reading of Scripture or seeing Jesus’ actions and hearing his words cannot lead to salvation through faith. What is absolutely required is enlightenment by the Holy Spirit, the power of the Comforter, which is active in the Church. In this sense, understanding, ‘knowledge’, of Scripture presupposes that we shall be invested with the Holy Spirit, and this occurs within the Church. Even for the apostles, simply being with Jesus wasn’t enough for them to find the faith which saves. They needed the ‘glory’ of Christ, by which their spiritual eyes were opened and they were thus able to remember the redemptive events. Faith doesn’t depend on the experience of the senses or rational proof, but on overcoming them through the renewing breath of the Holy Spirit. It really is foolishness to attempt to base faith on human power and reason. People outside Christ can ascertain some of the events of Jesus’ life up to the crucifixion. This isn’t enough for them to believe, however; much less, to be saved. Only if they receive the Holy Spirit will they be saved, renewed, and then be able to see the life of Jesus from a different angle. Only the disciples who had been enlightened by the Comforter were able to see the risen Jesus (see Acts 19, 40 ff), because they alone had the power of faith. In the same way, only those who have been led by the Holy Spirit into the new creation, the Church, can ‘know’ Holy Scripture’, that is be saved through it.

Thereafter the Evangelist divides the crowd that was present into two. On the one hand, there were the people who’d been present at the raising of Lazarus, as witnesses of Jesus’ divine power. On the other, there were the people of Jerusalem who came out of curiosity about the wonder-working Jesus or from faith in his Messianic capacity. Neither of these two parts of the crowd understood the real meaning of what was going on. You have the impression of watching a drama unfolding on two levels. On the first, you have Jesus entering amid the acclamations of the crowd, in triumph. On the second (invisible to those living outside the Holy Spirit), the king of the Church is progressing amid the hostility and ignorance of the world to the hour of his ‘glory’ the Cross and the Resurrection. The story of Divine Providence unfolds within empirical historical reality, but it needs the vision of faith for us to know the saving truth concerning the person of Jesus.