Prefiguration of the Resurrection in the Easter Canon

No other hymnological text expresses the redemptive, existential and metaphysical dimension of the Resurrection with such completeness and power as does the incomparable canon by Saint John the Damascan.

It’s a masterpiece of Byzantine poetry and one of the most beautiful texts in world literature. Full of sublime spirituality, lyrical expressions and messages of salvation, the Damascan’s canon announces to people of every era ‘the glad tidings of the Resurrection’, the abolition of death, the fulness of life and the triumph of the last days. Above all, however, it stresses the quality and quantity of the joy of the Resurrection. It shows us the way and tells us what we need in order to see the Resurrection. It strengthens us in our efforts to overcome physical and moral evil with the vision and certainty of participation ‘in the unfading day in the kingdom’ of the Lord. 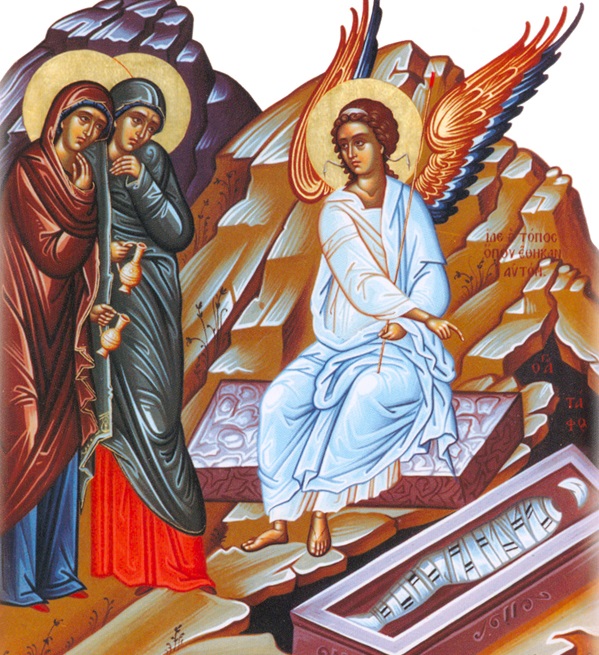 The wonderful poetic expressions, the selection of the most impressive words from Greek’s rich vocabulary, the ardent spirit of faith and hope, and, above all, an outpouring of powerful experiences of life are the main features which contribute to the composition of this magnificent canon.

One basic element which is readily observable in the hymn are the prefigurations of the Resurrection, drawn from the Old Testament, which are to be found throughout the canon.

* The first of these Old Testament references is in the irmos of the first canticle of the canon and contains the word ‘Pascha’. As we all know, ‘Pascha’ comes from the Hebrew ‘Pesach’, which means Passover. For the Hebrews, Pesach meant their salvation from slavery in Egypt and their establishment in the promised land. For Christians Pascha means passing from death to life, from enslavement to sin to the freedom of kinship with God, from the negative forces of the world to the positive forces of the Resurrection. And just as then, the Jews who were liberated from slavery to Pharaoh sang a hymn of victory, in a similar manner the new Israel of grace sings a hymn of triumph, since the Risen Lord ‘has passed us out of death over into life, and likewise from earth to heaven’.

*The second prefigurement of the Resurrection is the ‘new draught, not one miraculously issuing from a barren rock’, as Saint John says in the irmos of the 3rd canticle. According to the Biblical narrative in Exodus, when the Israelites were suffering from thirst in the desert, Moses struck a barren rock with his rod, causing abundant streams to flow, from which the people were able to slake their thirst. This event prefigures the ‘new draught’ which emerges from the life-bearing tomb in Jerusalem and is the fount of incorruption. It’s the sacrament of the Divine Eucharist, founded by God, the pre-eminent Easter meal of the Church, which is provided ‘for the remission of sins and life everlasting’ This is how believers experience Easter, this astonishing passover to another reality, to the ‘beginning of another, eternal way of life’

* In the irmos of the 4th canticle, with exceptional poetic skill, Saint John calls upon the Prophet Habakkuk to declare the Resurrection. In order to receive the prophetic message, Habakkuk had to stand at his watch and station himself on the ramparts. Saint John invites the prophet to stand on the spiritual ramparts and show humanity the ‘shining angel’ who is standing next to the empty tomb and announcing to the world ‘that Christ, the omnipotent, has risen’.

* In the third tropario of the same canticle, Christ is called the ‘yearling lamb’. In order to remember their deliverance from slavery in Egypt, the Jews sacrificed the Paschal lamb, which was a yearling. This lamb was a prefiguration of the Lamb of the New Testament, Jesus Christ, Who was sacrificed ‘for the life and salvation of the world’. Consumption of the Paschal lamb prefigures the sacrament of the Divine Eucharist, at which the Lamb of God is offered ‘to the faithful as food and drink’.

* The fourth tropario of the 4th canticle draws a parallel between David, the Prophet King, and the people of Israel. Just as David, when he brought the Ark of the Covenant from the town of Baalath (in Kiritath Jearim) to Jerusalem, danced for joy at this great event, in the same way, the members of the Christian Church rejoice, seeing ‘the significance of the symbols’ being fulfilled in the great event of the Resurrection. As the new Ark of Grace, the Church was founded on the power of the Cross and Resurrection, which is why it is for ever unmoveable.

* Jonah’s predicament is presented in the irmos of the 6th canticle as one of the most significant prefigurations of the Resurrection: ‘You arose on the third day from the sepulchre, as did Jonah from the whale’. Jonah was commanded by God to preach repentance in the city of Nineveh. He disobeyed the divine command, however, and boarded a ship sailing to the city of Tarshish. For this, he was punished by God. The ship in which he was travelling was in danger of foundering and Jonah, aware of his sinfulness, asked the crew to throw him into the sea, which they did. At God’s command, a whale [the Greek says κήτος, which originally meant ‘sea-monster’. Since the English word ‘Cetaceans’ derives from this, and since the largest member of this family is the whale, it seems reasonable to translate the word as ‘whale’. WJL] swallowed Jonah who lived in its belly for three days and three nights. The whale then spewed the prophet out onto dry land and he made his way to Nineveh to carry out God’s command. Jonah’s sojourn in the belly of the whale and his miraculous emergence are prefigurations of Christ’s three-day burial and Resurrection.

* Moses called the great day of the Hebrew Sabbath a special and holy day: ‘And the first day shall be called holy and the seventh day shall be special to you’. The day of the Hebrew Pesach was called ‘special’ (‘choice’) because it was chosen by God Himself. It was holy because it was dedicated to Him. Saint John uses the words ‘choice’ and ‘holy’ in the irmos of the 8th canticle of the Easter canon: ‘choice’ because it’s the eternal day of rest, the eighth day, the beginning of the sacramental time of the Kingdom, the starting-point for the renewal of the universe ‘holy’, because it’s the pre-eminent day dedicated to the Lord.

Christ’s Resurrection, which is prefigured most wonderfully in the Easter canon with so many depictions from the Old Testament, is a triumphant event of universal significance and power. Through the Resurrection, the power of the devil is crushed, death is mortified, decay is no more. This is why it is the ‘feast of feasts and the festival of festivals’.