Resurrection: the power of his love

What message could be stronger or more telling than that?

And if ‘Jesus the Nazarene’ doesn’t redeem us from death, what are we supposed to do with his teaching, however attractive it might be?

Two thousand years ago, in Jerusalem, the Resurrection of Jesus Christ turned human history upside down, changed the lives of millions of people and gave us hope for life, both here and in the future. 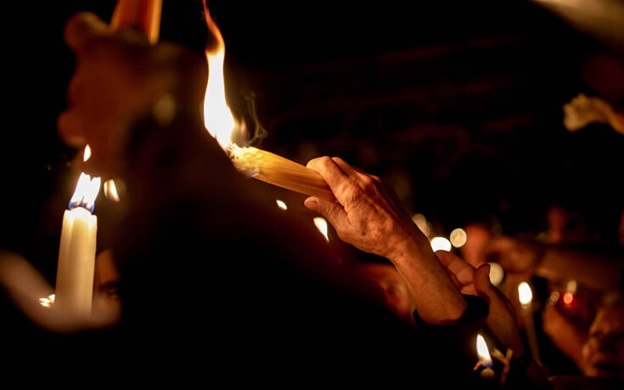 And yet it can’t be proved. It transcends reason, it makes nonsense of computations, it confound feelings. It’s an event that’s believed in, not proved. This isn’t of course, to say that those who believe in it do so because they’re gullible or just because others have told them to, though this may be the case in the beginning.

The belief that ‘Christ has risen indeed’ derives from the experience of a relationship with a living person:

You pray because you talk to him and he talks to you.

You try to observe his commandments because you love him.

When he’s silent, you know that he’s listening to you and will speak when the time’s right.

Whenever he hasn’t done what you wanted, you’ve later learned he knew what’s best for you.

If death isn’t the end of us as persons, that’s because Christ has risen!

If we can expect that pain and trials can be transformed into a state of grace, that’s because Christ has risen!

If we can hope in a change in our inept and disordered selves, with the various inherited and acquired passions we have, that’s because Christ has risen!

If we believe that injustice, oppression, exploitation and ‘might is right’ don’t have the last word, that’s because Christ has risen!

Christ’s Resurrection isn’t one of his many miracles, nor did it happen to prove his power, in order to discompose those who crucified him.

It’s the perfect expression of his love for the whole of the human race, everywhere on earth. His Resurrection touches and influences everybody: believers and non-believers, Christians and non-Christians. He’s the savior of the world, which he saves from its greatest enemy, death. But the acceptance of Jesus Christ as the only God/Man, who dies and rises ‘for the life and salvation of the world’, is required if his Resurrection is to become our resurrection.

On the feast of feasts, the Lord’s Resurrection, let’s leave to one side the problems of the pandemic, the restrictions, and any personal issues we might have and let’s allow our heart to embrace enemies and friends alike, overcoming the death which is selfishness, and let’s grasp the hand of the Risen Lord, crying aloud :

He has risen indeed!