5.The Cross of Christ, the outstanding symbol of our faith, doesn’t exist only to distinguish believers from unbelievers. Unbelieving non-Christians are, indeed, as tormented by the Cross as the devil himself is. But it also distinguishes to what extent we supposed Christians are conforming to Christianity every minute of our lives. We’re forever being assessed as regards our Christianity, even if we’re clergy or are able to count decades of Christian life and service. Recalling the best-known commandment of Christ ‘Love one another’, let us pose the question directly. Do we really love one another? Do we at least try to love other people? Don’t give a quick positive answer, because Christ refers to his Cross, his scales of justice, as an answer. He says: ‘Love one another as I have loved you. No-one has greater love than to sacrifice their soul for the sake of their friends’. If you love others it means you’re crucified, that is, ready to be sacrificed, for their sake. And so the Cross really is a scale by which people are judged; not only those outside the faith but also we ourselves. 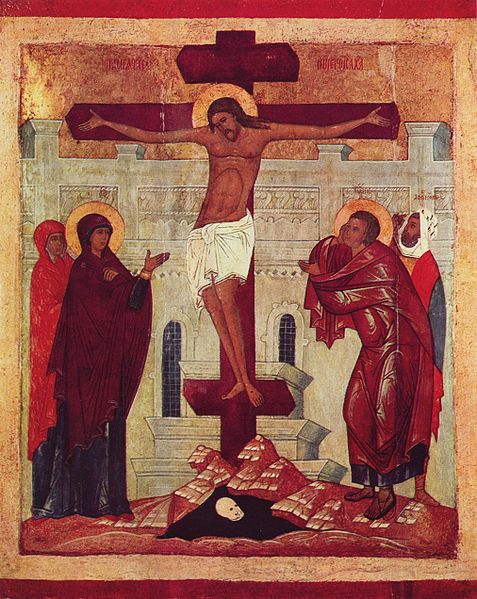 Icon of the Crucifixion

The saints are testimony to the fact that the Christian life isn’t a matter of contemplation, as is the case in Hinduism and Buddhism, but an activation on our part to reach the highest possible level of our powers. It’s a path  towards God and his image- other people- on which path we should always be prepared to make sacrifices for them. Even when Christians appear calm and peaceful, they’re still being charged with currents of divine life. The great modern elder, Saint Sophrony, who made his mark on our times with his experience and his theology, said about this matter that Christians are like electric wires: the current within which can power factories, yet sparrows and other little birds can stand on them without risk.

6.We’ve left to the last something which we all know full well, but which we nevertheless often forget. The Cross of the Lord is always linked to his Resurrection. Cross and Resurrection are two sides of the same coin. And the same is true of the cross of every Christian. Rejection of it, because of a lack of love, leads to hell even in this life, whereas acceptance of it and its responsibilities leads to resurrection as an experience of paradise. The Lord promises this repeatedly: if people take up their cross, that is, if they strive to love and to humble themselves spiritually, they’ll be in touch with God. He told us to keep his commandments and he would appear to us. In other words, for conscientious Christians, resurrection is a fact of the present, not only of the future after death and the Second Coming. And we, weak and small as we are, struggle to achieve this present, because, in the end, this is the whole of our spiritual life. We gain our relationship with the living God, which is defined by the Cross and Resurrection, not in the past, through remembrances, nor in a future which we may not even be granted, but through how we live and act in the here and now. ‘If you hear my voice today, do not harden your hearts’. From this point of view, the Cross of Christ provides the key to repentance to those who have even the slightest faith. As it did to the grateful robber and opened paradise for him.