‘The Fiery Sword and the Lord’s Cross’

The fiery sword no longer guards the gate of Eden, for it has been mysteriously quenched by the wood of the Cross. The sting of death and the victory of hell have been vanquished; for you,  my Savior, came and cried to those in hell: ‘Enter into Paradise once more’.

On the third Sunday in Great Lent, the Church displays the Precious Cross to be venerated by the faithful and to fortify them for the rest of their time in the arena of the virtues, the fast and the battle against the passions and sins. Anyone reading or hearing the kontakio for the day, quoted above, will want to know what this fiery sword is and what it means. 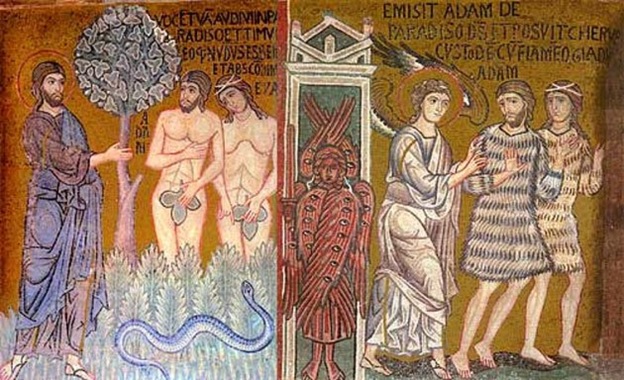 Chapter 3 of the book of Genesis tells us that: ‘the Lord God banished him from the Garden of delight to work the ground from which he had been taken.  After he drove the man out, he placed in front of the garden of delight cherubim and a flaming sword flashing back and forth to guard the way to the tree of life’ (23-24). This was the flaming and fiery sword which God set at the entry to the garden of delight, to keep it closed and to forbid access to our first ancestors, especially access to the tree of life. The kontakio continues the flow of the narrative and adds: ‘for it has been mysteriously quenched’. In other words, the barrier which hindered access to the tree of life was removed and the extinguishing of the fiery sword allowed everyone who believed in the risen Lord to enter the garden of delight. How did it come about, however, that the fiery sword was removed from the entrance to paradise? By being replaced by the precious and life-giving Cross of our Lord, Jesus Christ, on which had been nailed ‘the life of all things’, ‘the Lord of all and God the Creator’. By his voluntary sacrifice on the Cross, he vanquished death and gave eternal life to all those who believed in his teaching. The Cross of Christ is ‘life and resurrection’, ‘victory over hades’, and ‘a weapon against the devil’, because through the Cross Christ ‘as all-powerful God, bound hades, resurrected the dead with him, shattered the gates of hades and, as God,  destroyed the dominion of death’.

The hymns for the feast of the Veneration of the Cross sing the praises of the Lord’s Cross and call it ‘guardian of the gate of paradise’, ‘triumph of kings’, ‘boast of priests’, ‘support of the faithful’, ‘guardian of the whole world’, ‘glory and boast of the Church’, ‘much-vaunted boast of Christians’, ‘the essence of the message of the apostles’, ‘the diadem of the martyrs’ and ‘the most precious adornment of the prophets’.

This ‘most precious  adornment of the prophets’ is displayed for veneration in the middle of Great Lent, three weeks after Cheese-Fare Sunday, which the Church has appointed for the commemoration of the expulsion of the first-created from paradise. It encourages and strengthens the faithful in their battle against sin and prepares them to experience the spotless Passion of the Lord, with which Great Lent ends and Holy and Great Week starts. It enables them to become sharers and participants in the Resurrection of the Lord Jesus Christ, which points the way to the general resurrection.

‘By its power, Christ our God, preserve us from the attacks of the evil one. Allow us to venerate your divine Passion and life-bringing Resurrection, having profitably spent the forty days in the arena. And have mercy upon us, for you alone are good and the lover of humankind’.