In their works, the hymnographers of the Orthodox Church express their approach and perception of events, as presented by Orthodox tradition, in a particular way. With the Gospel and hymnographical texts as our guide, we shall approach the role of the disciples in the preparation of the Last Supper, insofar as this is possible.

All the Evangelists mention the preparation of the Last Supper before the Jewish Passover. It was a formal and important process, as we shall see below, and one which was probably performed every year by Christ and his disciples. This Passover would be different, however, because our salvation would be accomplished. This is why the Evangelists describe with considerable care the events which took place during the time of the Passover. 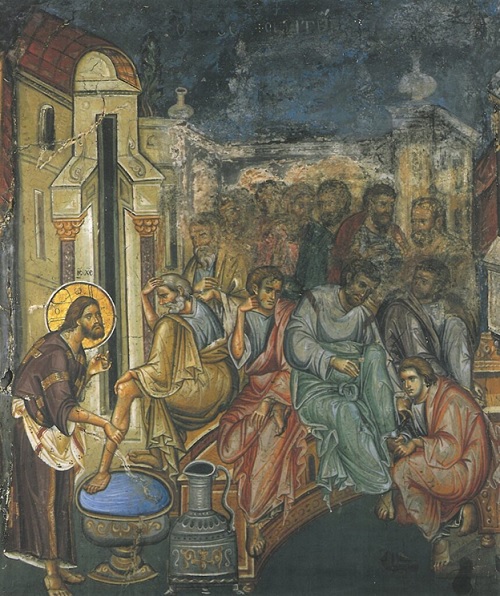 Saint Luke gives the most detailed account of the preparation of the Last Supper, using all his theological and narrative prowess. He begins the story of the Passion in chapter 22 of his Gospel. He wants to show, on the one hand the fall of humankind, with the betrayal by Judas and, on the other, our renewal, with the help and repentance of the disciples, particularly Peter. Thus, on the one hand, we see Satan, who continues to exercise influence over fallen humankind, even in the presence of Christ himself, and, on the other, we see how we can be saved with God’s light and aid. As Luke states: ‘3 Then Satan entered Judas, surnamed Iscariot, who was numbered among the twelve. 4 So he went his way and conferred with the chief priests and captains, how he might betray him to them. 5 And they were glad, and agreed to give him money. 6 So he promised and sought opportunity to betray him to them in the absence of the multitude’.

On the basis of the passages which foretell  and reveal Judas’ betrayal, the hymnographers composed a variety of works which interpret in their own way the situation which obtained in the days leading up to the betrayal and crucifixion. In other words, the struggle between fallen humankind, which is in thrall to satanic action and those people who turn to the Lord, seeking help. This assistance is, indeed, provided by our merciful Lord through his sacrifice on the Cross and his Resurrection.

This is why, in the antiphons which are read between the Gospels on Great Thursday, we see that almost every verse presents a double image. On the other hand, there is a depiction of people who, to the end, believed, followed and gradually came to understand Christ, and on the other the darkened mind of Judas, who, even though he experienced what all the other disciples did, voluntarily blinded himself and, for a reward, prepared the betrayal.

Kathisma: Deceitful Judas, in his love for money, pondered cunningly how he might betray you, Lord, the treasury of life. Therefore in drunken folly he hastened to the Jews and said to the transgressors: ‘What will you give me to deliver him to you to crucify?’

Troparia (ode 9): Ungrateful and envious in his wickedness, wretched Judas weighs the value of the gift worthy of God whereby the woman gained release from the debt of her sins, and he trades in the grace of divine love. Spare our souls, Christ our God, and save us.

Judas goes to the lawless rulers and says: ‘What will you give me if I deliver to you Christ, whom you are seeking?’. In exchange for money, he rejects fellowship with Christ. Spare our souls Christ our God and save us.

Implacable in the avarice which has blinded you, you have forgotten that, as you were taught, your soul is worth the whole world. In despair, you hanged yourself, traitor. Spare our souls Christ our God and save us. 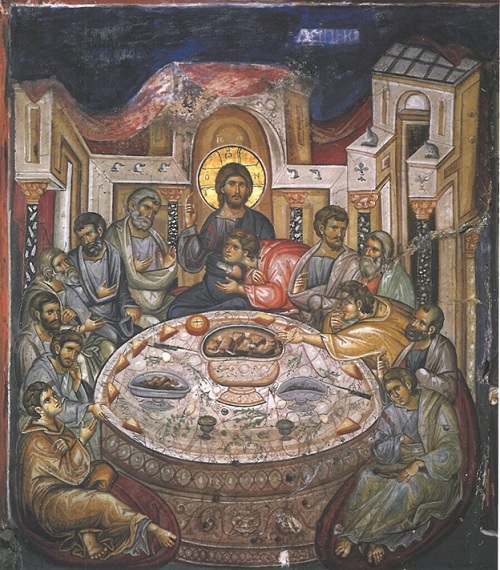 Tropario: When the glorious disciples were enlightened by the washing of their feet, then Judas, the ungodly, sick from avarice, was darkened and delivered you, the righteous judge to the lawless judges. Look, lover of money, at the one who hanged himself because of it. Flee from that insatiable soul, which dared such things against his teacher. Lord, loving towards all, glory to you.

Antiphon 2 after the 1st Gospel:  Judas ran to the lawless scribes and said: ‘What will you give me to deliver him up to you?’. While they were conspiring, you, yourself conspired against, were standing invisibly in their midst. You who know our hearts, spare our souls.

As part of the preparations for the Passover and while Judas was in touch with the priests over the betrayal of Christ, the Lord sent his disciples to make ready the supper. This involved the purchase of a lamb as well as locating somewhere for the meal to take place. Christ tells his disciples how to find it: 8 And he sent Peter and John, saying, ‘Go and prepare the Passover for us, that we may eat’. 9 So they said to him, ‘Where do you want us to prepare?’ 10 And he said to them, ‘Behold, when you have entered the city, a man will meet you carrying a pitcher of water; follow him into the house which he enters. 11 Then you shall say to the master of the house, ‘The Teacher says to you, “Where is the guest room where I may eat the Passover with my disciples?”’ 12 Then he will show you a large, furnished upper room; there make ready.’ 13 So they went and found it just as He had said to them, and they prepared the Passover. (Luke 22).

The hymnographers incorporated their interpretation of the preparations for the Last Supper into the general context of the preparation of all of  the faithful. Just as the disciples prepared and were themselves prepared with obedience for the Last Supper, so the faithful, during the period of Great Lent and Great Week, are prepared to be witnesses of the Passion, of the bloodless sacrifice, and to receive within themselves the risen Christ. So we see that remarkable hymns have been written which accompany the events of those days.

Canon by Saint Kosmas of Maïum

Ikos: Let us approach the mystical table and, with pure souls, let us receive the bread, waiting for the Master, to see how he washes the feet of the disciples and wipes them with a cloth. Let us do as we have seen, subjecting ourselves to each other and washing one another’s feet. For Christ himself commanded his disciples to do as much. But Judas the servant and deceiver did not listen.

Irmos: Come you faithful, with minds uplifted, let us enjoy the Master’s hospitality and the table of immortality in the upper room. And let us attend the exalted teaching of the Word, whom we magnify.

Hymn: The Word said to the disciples, ‘Go and prepare the Passover in the upper room, where the mind is established. Prepare the unleavened bread of truth for those I share it with and magnify the strength of grace’.

Initiating your disciples into the mystery, Lord, you taught them, saying: ‘My friends, see that no fear separates you from me. For if I suffer, it is for the world. Do not let this be a stumbling-block for you, for I have come not to be served but to serve and to give my soul as ransom for the world. If you are my friends, do as I do. Let those who wish to be first, be last, the master be a servant. Abide in me, so that you may bear fruit; for I am the vine of life’.

In concluding at this point, we can see the interpretative approach and perception of the hymnographers. Thus we have particular emphasis on the person of Judas, who betrays his teacher. This emphasis, in both the Gospels and hymns is not there to promote this behavior but for us to avoid it and also to highlight the proper example of the other disciples: the example of patience, obedience and service, as well as the grace we can receive which is able to transform denial into repentance.