The Son of Man will be delivered

‘We are going up to Jerusalem’, he said, ‘and the Son of Man will be delivered over to the chief priests and the teachers of the law. They will condemn him to death and will hand him over to the Gentiles’ (Mark 10, 33).

Among all the religions, only in the Christian faith does the founder not promise long life, prosperity, pleasure and comfortable circumstances for those who follow his words and example. It’s the only faith in which the adherents’ interests, as most people understand this, are not catered to. Instead, behind every thought, gesture and action appears the cross, which is a prerequisite for the resurrection. The whole of life won’t be a trial, nor will its ending be without hope. But the Lord didn’t hide any of the things that would happen to him. He boldly told his disciples, and all of us, that the life which has been promised to us passes through the death of everything that belongs to the present, before we reach the resurrection and the life which brings joy. The only premise for us to experience eternal truth is love. 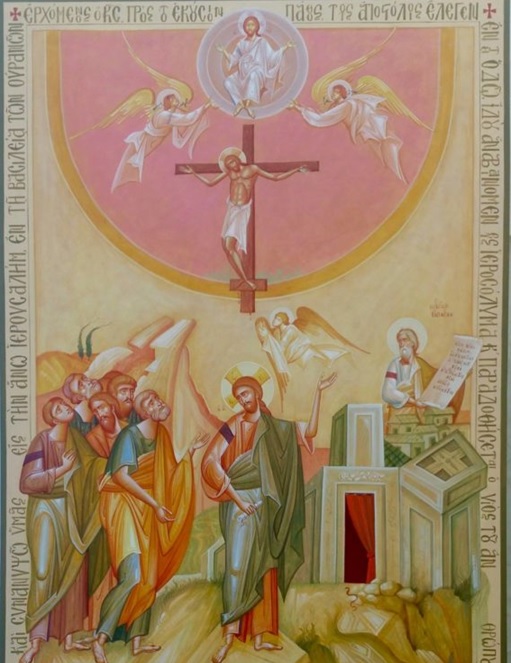 Let’s dwell on this difficulty for a little, because it’s not easy for people to follow the path outlined by the faith. We live in a society that promises the exact opposite: power, authority, enjoyment, a share of material goods, an extension of life for as long as possible and an emphasis on ‘optics’. And the gate by which we enter this kind of life is broad. On the other hand, the gate, as well as the path, demanded by Christ are narrow and full of sorrow. The beautiful requires effort, requires a cross, requires a decision that lasting joy comes from the burden of love and sacrifice. This is like when, after striving for something, we rejoice when we achieve it, because we know we’ve given something of ourself for it. When we’re simply handed something, we often don’t know what to do with it, nor can we appreciate it. In the same way, in the life of the faith, the way of the cross makes the resurrection the greatest blessing: victory over our self, which wants it all and wants it now. This is the greatest victory, which makes people who’ve shown patience truly happy and blessed.

The Christian faith isn’t an idea, but an encounter with Christ, as a divine and human person. Our visual sense may have no tangible proof of his presence, but the eyes of our soul do. If we try to transcend the level of appearances, the people we meet and the circumstances we live through will prove to us that Christ is present through faith. There’s his tender love in our defeats which prevents us from becoming downcast. There’s the feeling that everything happens for a reason, even things which are very unpleasant. There’s the expectation of the kingdom, which is within us, every time we love and put our trust in Christ. There’s holy communion, which changes our life since we recognize and experience the joy that it gives us to realize that we’re not alone. There’s every gesture of love, which is an imitation of Christ. There’s silent prayer, sometimes expressing thanks, sometimes that of a child sharing its hurt, its grievance, its request and its silence with its father and mother and feeling safe, overcoming fear and loneliness. There’s the experience of the apostles and the saints which shows us that thousands of people have trodden the narrow, dolorous path before us, haven’t given up and that we can do it, too. Because the light of faith is given by him who was the first to set out on the way of the cross, the path of abandonment of all power, the road of voluntary death, out of love and love alone.

We live in an era when, if people hear about effort, they prefer false promises that everything will be all right and that we don’t even have to lift a finger. That all we need is to believe in God and we’ll be able to be judges of the world, like the two disciples who, just before the crucifixion, asked if they could sit at his side, one on the left and the other on the right. As did the others, which is why they were so annoyed at the first two for having made their request for glory and authority first. But Christ tells the truth: that love demands effort, it demands patience, it demands a cross, it demands the death of the primacy of the ego, if we’re to reach the resurrection which redeems and which gives the light of eternity, even in this present life and this moment. As we make our way towards Easter, let us seek Christ, as the way, truth and life, let us not fear any cross of love, let us offer our spiritual labor, with repentance over the many things which we haven’t achieved, and, in the life of the Church, let us await the resurrection.