We have you as an example of repentance, Mary the Egyptian

On the fifth Sunday in Lent, the Church brings to our attention an exceptional female ascetic: Saint Mary the Egyptian. She’s someone for us to imitate and has a great deal to teach us. Her Life was preserved for us by Saint Zosimas and written down by Saint Sofronios, Patriarch of Jerusalem (commemorated on 11 March).

Saint Mary lived at the time of the Emperor Justinian, in the sixth century, in Egypt. At the age of twelve she began to live a dissolute life, enjoying and satisfying the pleasures of the flesh. This lasted for twelve years, until she ‘came to her senses’ and realized the error of her ways. While she lived this life, she took no money, but merely indulged in her passion. 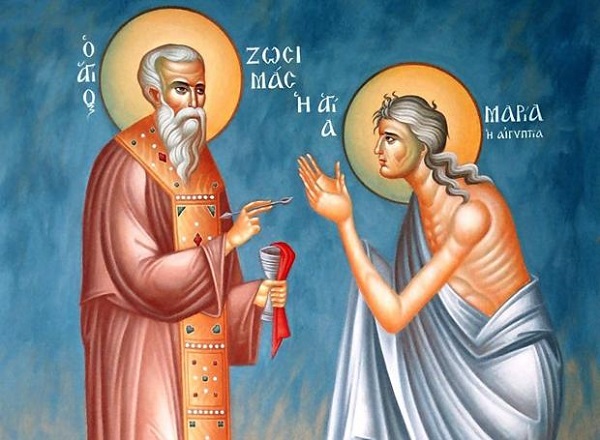 But the merciful and loving God Who wants everyone ‘to be saved and to come to knowledge of the truth’ sent a message to Mary to make her realize her error and bring her to repentance. One day, she was with a group of pilgrims who were going on a pilgrimage to Jerusalem. She had no intention of venerating the holy places, but simply wished to lie with those who were travelling. It was in Jerusalem that a miraculous event occurred. As she was going in to church to reverence the Precious Cross, something stopped her from entering. She herself realized where this obstacle originated and went to the icon of the Mother of God, demonstrated her repentance and asked Our Lady for her help and guidance. After this she was able to enter the church unhindered. She venerated the Precious Cross and heard a voice telling her to go out into the wilderness.

She lived forty years in the desert without setting eyes on another human being. The only One Who saw her was our Lord, Jesus Christ. She struggled valiantly and bore many trials without complaint, attempting through her strict asceticism to overcome the thoughts which arose from her former, dissolute life. In the end, she attained an angelic life, beyond the bounds of what is normally humanly possible. She lived on a level where she no longer felt the passions, that is, she no longer felt bodily pain, hunger or thirst. Her mind was entirely focused on God, according to Saint Peter the Damascan. If a troubling thought did come to her, she would drop to the ground and soak it with her tears and wouldn’t rise again ‘until that sweet light engulfed me and cast out the troublesome thoughts’.

Through the power of God, she managed to defeat the devil and ascend on high to God. How? In what way? Through prayer and fasting. Because prayer and fasting are the two forces which overcome everything else. There’s a wonderful Lenten hymn that says: ‘Let us follow the Saviour of our souls, Who has shown us victory over the devil through fasting’. There’s no other weapon, no other means. Fasting! This is the way to defeat the devil, any devil. An example of this victory is Mary the Egyptian.

Another figure was very important in the course of Mary’s life and this was Saint Zosimas (commemorated on 4 April). At one stage, he left his monastery to go out into the wilderness to lead a stricter ascetic life. Here he met Mary, who confessed to him the whole story of her life and then asked to partake of Holy Communion. The next year, on Great Thursday, the Lord permitted her to make her Communion. The following year, when Zosimas went to visit her, he found her dead and, next to her body, the message: ‘Father Zosimas, bury the body of the wretched Mary here. I died the same day that I took Holy Communion. Pray for me’.

The former harlot became the greatest female ascetic of any generation. Mary’s life is very moving and is an example to all of us. What each one of us can learn from her life is that the saints of the Church weren’t super-human, untouched by sin. They weren’t sinless, but were people of flesh and blood who lived in the world. They had their ups and downs and made mistakes. What is important, however, is the manner in which they dealt with their errors: through repentance. The treatment for sins is repentance, which is also the most effective weapon against the devil, who, in our own day and age, is setting traps and lying in wait in all sorts of places. So when you sin, as David says, ‘first tell your sins, so that you may be vindicated’. You can be sure that, with the remedy of repentance, God’s mercy will flow abundantly into your soul. Sin is nothing other than alienation from God, our Creator.

Saint Mary’s repentance was total because she was truly sorry for the way she’d lived, her mistakes. She left that person behind and became someone new. Repentance is a continuous state and the recollection of our sins should stay with us even after we’ve repented. However many times you lose you footing, you have to get up again. By the same token, no matter how often you sin, you have to keep on repenting.

Not everybody is able to be an ascetic or a hermit, but each of us has our own path towards salvation. Saint John Chrysostom points to five ways to salvation, among others: self-criticism and confession of sins; forgiveness and love for others; lamentation and tears over our sins; humility; charity; and fervent prayer.

Through her life, Saint Mary confirms the words of the Lord that ‘harlots and publicans will enter the Kingdom of Heaven’. In other words, sinners who’ve repented. The saint calls upon us to repent and to return to the bosom of the Father, on our way towards the Passion and the Resurrection of the Lord.