Lapse and Recovery: the Experience of Christians

‘As often as you fall, get back up and you’ll be saved’.

This is one of the best-known sayings in the Church, but one which we don’t find in precisely those words in the New Testament. It may, as regards content, convey the word of Christ and the preaching of the Apostles, but it is to be found, in this form, in one of the prayers of holy unction. There, in fact, it’s attributed to the Lord Jesus Christ himself: ‘You, Lord, said, that as many times…’ which has led many to believe that these are actual words of Christ which weren’t preserved in the Gospels, but have been kept in the broader context of the Tradition of the Church. Don’t we see the same in the well-known phrase ‘It is better to give than to receive’, which is attributed to the Lord by Saint Paul, but doesn’t exist in the Gospels? 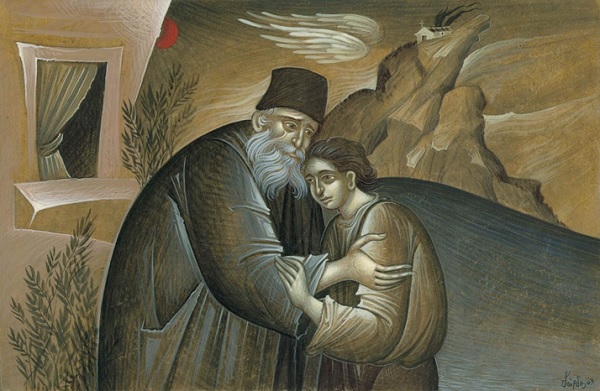 Be that as it may, however, this saying, even if somewhat altered, does express the revelatory message of the Lord. Because he came to offer us repentance as the enduring struggle in our search for God. Repentance doesn’t mean just a change of thought, isn’t simply regret over something bad. After Judas betrayed the Lord, he showed that that sort of regret doesn’t bring salvation. Repentance is a change in outlook and way of life: I leave behind my egotistical, sinful way of life and return to the Lord (‘I shall arise and return to my Father’), striving ceaselessly to follow in his footsteps, which means in his holy commandments. And through what power can this become a reality? How can the mortal wound inflicted upon us by sin enable us to escape our half-dead state and transport us onto the path of Christ, that is, make us into a second Christ? Only the power of Christ himself, of course. He came to bear our sins and to give us his power and righteousness. This happened on the Cross. His Cross healed our wounds (‘by his bruises we have all been healed’ [Is.53, 5] and destroyed the tyrannical authority which the evil one had been exercising over us. Therefore, from the moment we were baptized and became members of him, Christ has channeled his power into our existence, provided, of course, our will is aligned with his.

How, then, do we sin and how are we required to keep rising after our lapses? This was a crucial question which troubled the Church for quite a long time, to the extent that some Christians, perhaps the strictest,  claimed that those who sinned after baptism would not find forgiveness from God. Fortunately, the Church, through synods, came to a different conclusion: sins committed after baptism could also receive forgiveness and remission, because, on the one hand, the grace of God which flows from the Cross is inexhaustible; and, on the other, because we people, alas, are weak and lean all too easily towards wickedness in this world which is fallen and sinful. The person who fought most strongly, together with other Fathers, for the Church’s leniency towards human weakness was the great Saint John Chrysostom. He was and is considered the outstanding preacher of repentance, that is, that if people sincerely repent over their sins they receive God’s love in the same measure as do the ‘sinless ones’. The Lord’s parable of the prodigal son was the absolute rule for Chrysostom: the Father, i.e. God, welcomed the prodigal so deeply that he restored him to his former state, blotting out all remembrance of the son’s waywardness from his memory. This is why our Church established the sacrament of repentance at a very early stage and called it ‘a second and repeated baptism’.

But is anyone ‘sinless’? Is it possible to live even for an hour in this life and not sin. The Christian faith says not. Because sin isn’t understood merely as a deed, but also as words and thoughts. To the utterly Sinless Lord, a wicked thought is considered a sin which has already been committed. ‘Any man who looks at a woman (and, by the same token, any woman who looks at a man) with wicked, lewd thoughts has already committed the sin of adultery in his heart’. And Saint John the Theologian says: ‘If anyone says they don’t sin, they’re lying’. The sad reality that we’re all sinners has, unfortunately, been confirmed constantly over the centuries. Even if we have the power of the Lord to help us be sinless, we all sin because of the laxity of our spiritual life, which is why the Church has always stressed repentance as the only road to salvation. Repentance as a constant beginning of an earnest life, up until the hour of our death. This is the greatest consolation we have in this world, as the great John of the Ladder also remarks. Taking our sinful state as a given, he urges constant repentance as a way of repeatedly getting back up. He says that the characteristic of the angels is that they don’t sin at all; the characteristic of the demons is that they do nothing but sin; and the characteristic of people is that they fall into sin but are able to rise, through repentance.

So, being human, we fall and sin. But that’s not the end of it. Just as we might stumble and fall  on a road, but then get up, so, on the road of the spiritual life the same thing should happen. We get back up. Always. ‘As often as you fall, get back up and you’ll be saved’. Our mother, the Church opens her arms to us every time we take a false step. All that’s necessary is that our priority should be our salvation, our relationship with God.