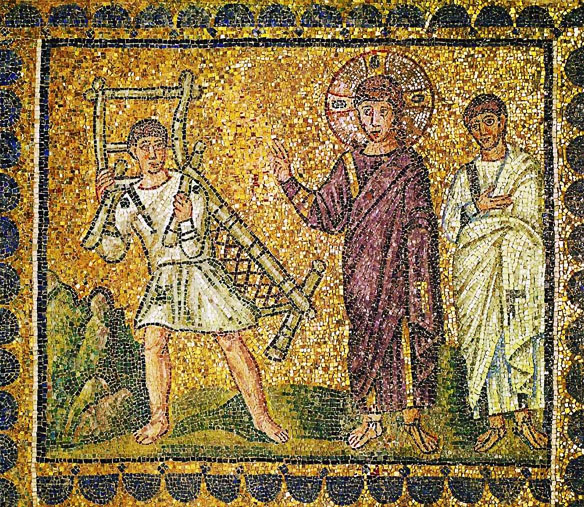 Excerpt from a Homily by Saint John Chrysostom

If someone’s really knowledgeable about gold mines, they wouldn’t be able to bear not examining the smallest vein for the wealth it contained. So, in the Scriptures, it’s impossible without loss to pass over the merest jot. We must investigate everything since everything’s uttered by the Holy Spirit, and there’s nothing written in them to distract us.

Consider, for instance, what the Evangelist says here, ‘This is the second miracle that Jesus did, when He came out of Judaea into Galilee’. Even the word ‘second’ hasn’t been added without a reason, but so as to further exalt the Samaritans, by showing that even when a second miracle had been performed, the people who beheld it [the Jews] still hadn’t reached the heights of those who hadn’t even seen one [the Samaritans].

‘After this there was a feast of the Jews’. What ‘feast’? I think probably Pentecost. ‘And Jesus went up to Jerusalem’. He was often in attendance in the city at feasts, partly so that He might appear to feast with them and partly so that He might attract the multitude that was free from guile, because, during these days especially, people of a more simple disposition met together more than at other times.

‘Now there is at Jerusalem a sheep-dip [the Gospel actually talks of a pool near the Sheep Gate] called Bethesda in Hebrew, with five porticos. In these lay many invalids- lame, blind, paralyzed’, waiting for the water to be moved.

What sort of a cure is this? What mystery does it signify to us? These things aren’t written carelessly, or without a purpose, but as ‘figures’ and ‘types’ they underline things to come, so that what’s extremely strange shouldn’t harm the faith of the hearers by coming unexpectedly. What is it then that they underline? A baptism was about to take place, one of much power, and the greatest of gifts, a baptism that purged all sins, and made people alive rather than dead. These things are foreshadowed, as it were, in a picture of the circumstances by the pool, and by many other situations. First there’s water which purges the stains of our bodies, and those defilements which are not actually, but seem to be, from a funeral [cf. Numbers 5], from leprosy, and other similar causes.

First then, as I’ve just said, He does away with the defilements of our bodies- and afterwards infirmities of different kinds- by water. Because, by desiring to bring us closer to faith inbaptism, God no longer heals only defilements, but diseases, too. Those ‘figures’ which are nearer in time to the reality, both as regards Baptism, the Passion, and other events, are more obvious than the more ancient ones. Just as the guards closest to the person of a prince are more splendid than those further away, so was it with the ‘types’.

‘An Angel came down and troubled the water’, and imbued it with healing power, so that the Jews might learn that the Lord of the Angels could do much more, by healing the diseasesof the soul. It wasn’t simply the nature of the water itself that healed (because then it would have happened every time), but water joined to the action [or ‘energy’] of the Angel. So in this case, it’s not merely the water that works; it’s after it’s received the grace of the Spirit that it dispels all our sins. Around this pool ‘lay many invalids- lame, blind, paralyzed’, waiting for the water to be moved. But, where once infirmity was a hindrance to those who desired to be healed, now each person has the power to approach, because now it’s not an Angel that troubles the waters, it’s the Lord of the Angels who does everything. The sick can’t now say, ‘I’ve got nobody’; they can’t say, ‘While I am making my way someone else steps down in front of me’. Even if everyone in the world were to come, the grace wouldn’t be used up, the power wouldn’t be exhausted, but would remain as great as it was before. Just as the sun’s beams give light every day, but are never exhausted, nor is their light decreased by providing such an abundant a supply, so, and much more so, is the power of the Spirit in no way diminished by the numbers of those who enjoy it. And this miracle was performed so that, on learning that it’s possible to heal the diseases of the body by water, and having become accustomed to this over time, people should believe more easily that it can also heal the diseases of the soul.

But why did Jesus, leaving the rest, come to one who’d been there thirty-eight years? And why did He ask him, ‘Do you want to be made well?’ Not to find out- there was no need- but to demonstrate the man’s perseverance, so that we might know that it was because of this that He left the others and came to him. What did the man say? ‘Yes, Sir, but I have no-one to put me in the pool when the water is stirred up, but while I am making my way someone else steps down in front of me’.

This is why Jesus asked, ‘Do you want to be made well’ and not, ‘Do you want me to heal you’ (because, as yet, the man had formed no great idea as regards His identity) but ‘Do you want to be made well’. The perseverance of the paralytic was astonishing: he’d been there thirty-eight years, hoping, each time, to be delivered from his disease. He continued in attendance, and didn’t give up. Had he not been so tenacious, wouldn’t the future,if not the past, have been enough to stop him being taken there? Just think, I beg of you, how watchful the other sick people would have been, since no-one knew exactly when the waters would be troubled. The lame and the paralyzed would have observed it, but what about the blind? Perhaps they would have realized from the clamour that arose.

We should be ashamed, my friends, ashamed, and lament our excessive sloth.  The man had waited for thirty-eight years without getting what he wanted, but still didn’t give up. He hadn’t failed through any fault of his own, but through the oppression and violence of others, and yet he was still as keen as ever. We, on the other hand, if we’ve been praying for something for ten days and still haven’t obtained it, are too lazy thereafter to apply the same zeal. We wait on other people for any length of time, bickering, enduring hardships, performing servile tasks, and often, in the end, having our expectations dashed, but on ourMaster, from Whom we’re sure to obtain a reward greater than our labours- as the Apostle says, hope does not disappoint us- on Him we can’t bear to wait with due persistence. What chastisement this deserves. Even if we were to receive nothing from Him, oughtn’t we to consider our very converse with Him equal to ten thousand blessings? ‘But praying all the time is hard work’.  Is anything that has to do with virtue not laborious? ‘Really’, some people say, ‘it’s very difficult that pleasure’s connected to vice, and labour to virtue’. I think a lot of people are troubled by this. What can the reason be, then? In the beginning, God gave us a life free from care and exempt from labour. We didn’t use the gift properly, but were perverted by doing nothing, and were banished from Paradise. Because of this, He made our life toil in future, assigning as it were His reasons for doing this to humankind. He said, ‘In the beginning I allowed you to lead a life of pleasure, but you were made worse by liberty and so I commanded that, from now on, labour and sweat be laid upon you’. And when even this labour didn’t restrain us, He then gave us a law containing many commandments, imposing it on us like bits and curbs on an unruly horse to stop it from prancing, as horse-breakers do. This is why life is laborious, because not to labour is bad for us. Our nature is such that we cannot bear to be doing nothing, and easily turn aside to wickedness. Suppose that somebody who’s temperate and who’s virtuous in all other respects, didn’t need to work and did everything in their sleep, how would they use their leisure time? Would it not be for pride and boastfulness?

‘But why’, you might ask, ‘has great pleasure been associated with vice, and great labour and toil with virtue?’ Well, what thanks would you have had, and why would you have received a reward, if the matter hadn’t been one of difficulty? Even now I can show you many who naturally hate having anything to do with women, and avoid conversation with them as impure. Shall we call them chaste; tell me, shall we crown them and proclaim them victors?