The resurrection of Christ is the quintessence of God’s revelation to us. It’s the foundation of the recreation of the world, the basis of the Church and its message: ‘And if Christ has not been raised, our preaching is hollow and so is your faith’ (1 Cor. 15, 14). With his great love, God, who is rich in mercy, raised humanity together with Christ and elevated us, along with him, ‘to the heavenly realms’ (Cf. Eph. 2, 4-6). As was his incarnation, Christ’s resurrection is the work of the Triune God. Father Dumitru Staniloae says that Christ received the Spirit as a human person because he is welcomed as such into the perfect communion of the Trinity, with the aim  that by grace we, too, may be received into that community. Christ rose and ascended into the heavens but, in the Spirit, remains with believers all the days until the completion of the age’ (Matth. 28, 20). He is Emmanuel; the God who remains with us always.

With his resurrection Christ alone demonstrated self-authority to the world. And the revelation which Christ manifested to the world is the only true revelation; the only ‘new thing under the sun’ (Cf. Eccl. 1, 10). Every other revelation lies within the bounds of death. This is why Christianity is, essentially, the only religion from a revelation, or, more precisely, is the only revelation which is experienced as a religion. And the Christian commandment of love, which is extended to the whole world, including enemies, is the pre-eminent ‘new commandment’. ‘I give you a new commandment: that you should love one another as I have loved you’ (Jn. 13, 34). This commandment isn’t put forward as a virtue of some ethical code of behavior, but as a demand for a new way of being which the resurrection inaugurates. It’s a commandment propounded within history, but is dictated by its connection with eternity. 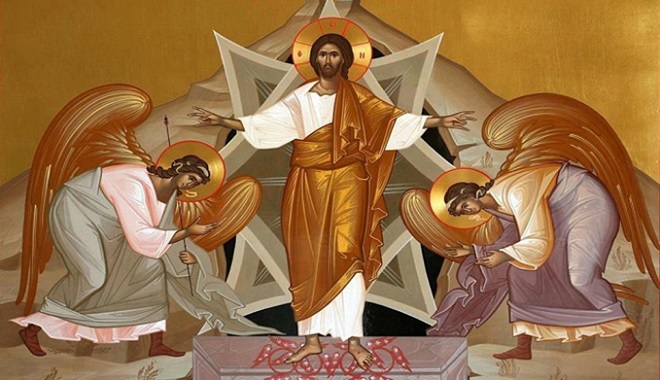 Love is innate or ‘seminal’ in people, and everyone, more or less, loves their fellow humans. Christ’s new commandment isn’t merely a command to love in the general sense. The new thing he introduced to the world here is ‘as I have loved you’. ‘If you love those who love you, what credit is that to you? Even sinners love those who love them’ (Luke 6, 32). Christ was sacrificed for everyone, including his enemies. ‘As I have loved you’, means sacrificing yourself for others: friends and enemies. But, without the resurrection the love which embraces even your enemies is incomprehensible and utopian. So, the resurrection is presented as a triumph of Christian love, and, love as the experience of the resurrection.

It becomes clear, then, that the resurrection and love, these two fundamentals of the dogmatic and moral truth of Christianity, are not theoretical or ideological proposals, but, rather, ontological attainments. Christ revealed them, the apostolic community experienced them and passed them on to the Church, with the unbroken apostolic succession as the historical guarantee. The Christian truth isn’t transported mechanically from the heavens, but is revealed within history through the active presence of the Holy Spirit and the joint efforts of humankind.

At the same time, however, Christian truth is the truth of heaven. Common to God and humankind. It’s the truth which comes and abolishes the law of death and establishes the law of love and freedom, both for our transitory and our eternal life. This, of course, means that our adoption of it cannot be of a theoretical or intellectual nature but must be experienced empirically. Adoption of Christian truth is the adoption of Christ, in the Holy Spirit, who embodies the truth (Cf. Jn. 14, 6).

At the beginning of the Anaphora at the divine Liturgy of Saint John Chrysostom, it says about Christ: ‘when he had come and fulfilled the whole dispensation for us…’. What was this ‘dispensation for us’ that Christ effected in the world? Certainly his inconceivable compassion and perfect obedience to the will of God the Father which brought him to the passion and to death on the cross and was completed with the resurrection and ascension. What humankind did, and continues to do, that is to transgress against the will of God, the concomitant of which disobedience being the just subjugation to the law of death, was corrected by Christ by his perfect obedience and unjust death. The spread of human authority brings with it the extension of the dominion of death. The more we try to defeat death with the means at our disposal  and the methods we invent, the more complicated our relationship with it becomes.