The Life-Giving Word (Sunday of the Paralytic)

The subject of the narrative in the Gospel of Saint John (5, 1) concerning the complaint of the man who’d been paralyzed for 38 years, is genuinely moving: ‘I have no-one to put me into the pool when the water’s disturbed’. He was alone and helpless. However, the help which he was unable to find from other people, was given to him in the most dramatic, conclusive and authentic manner by Christ. With his authentic word, he restored the sick man to health. Just as the creative word of God made the world from nothing (according to the narrative in Genesis), the same dynamic word of the Son of God re-makes his creation which has been ravaged by sin and disease. 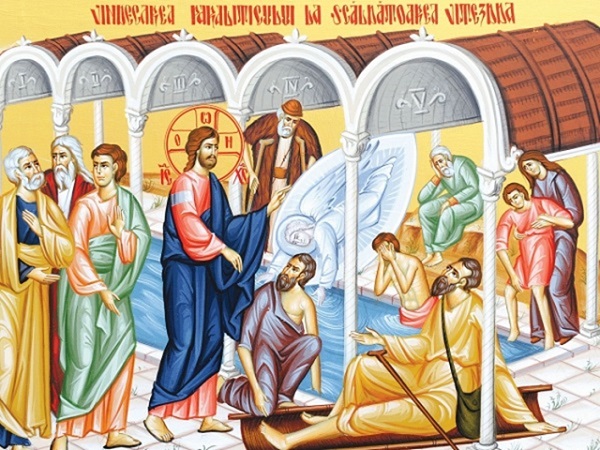 The word of Christ gives life, it is life-giving [cf. the feast of the ‘Life-Giving Spring on the Friday in Bright Week], provided we receive, with faith and trust, this authentic word, which differs radically from human words. Because it doesn’t provoke, but helps; it doesn’t destroy but creates; it gives life and resurrection. Jesus says that those who hear his word and believe in him who sent him have eternal life. They won’t be judged but have already made the transition from death to life (John 5, 24). This divine word remains true unto the ages, without being altered or weakened by the passage of time and without becoming any the less apposite. Because the hope of life and victory over death remains our enduring desire and this isn’t affected by technical progress or political developments which leave us even more dependent on our own devices and without help as regards our most urgent entreaties. Surrounded as we are by comforts and gadgets which, on the surface, make our life easier, we’re still aware of the absence of other people, helpers and supporters.

It’s really strange, the way people often react to the word of God when it’s offered to them. The Jewish leaders in the narrative were upset because Jesus effected the miracle on the day of the Sabbath, requiring the sick man to rise, pick up his pallet and go home, cured after 38 years of being ill. Through their narrow-mindedness, the representatives of religion were blinded by the letter of the Law and didn’t see the Spirit of God that was manifested to humankind in Christ. They thought that the whole religious system of legal ordinances and provisions was collapsing, at the very moment when Christ was offering people love and life.

In a world that was composed, on the one hand of people distorted by sickness and sin and, on the other, by those Jews characterized by their narrow-minded formalism in the sphere of religious life, who denied the divine advent of Christ, God revealed himself, not as an avenger and judge of all this. Instead, he came as the savior who relieves our sickness, frees us from dry formalities, gives life to people and buoys the hope of the resurrection, since, through his death, the Son of God vanquished death and triumphed over the forces of decay and destruction.

1) He corrected the distortion of human nature which leads to ruin, destruction and death, bringing us back into the path of life which leads to the world of the resurrection.

2) He liberates us from the dry bones of the letter of the law, revealing the love God has for us.

3) He speaks the word of truth, which amid the often lying words of people, is testimony to authenticity of divine power. Those who believe in this word overcome death and enter the kingdom of real life, the divine life without end.