The second Sunday after Easter is dedicated to the holy myrrh-bearers, men and women, who took care of the burial of the pure body of our Lord. In this way we honor their exceptional devotion to Christ, as well as their heroism, given that it was no easy thing to ask to bury the body of someone who’d been condemned for the crime of ultimate betrayal. Any demonstration of sympathy towards someone found guilty of such a crime would have risked being stigmatized. It wouldn’t have been difficult for others to tar the person with the same brush, so that they would meet the same end as the dead criminal.

The official charge against Christ was that he had declared himself to be a king ‘calling himself Christ the king’ (Luke 23, 2). This is why the soldier executioners wrote on the inscription on the cross: ‘the king of the Jews’ (Mark 15, 26). Any form of opposition to Roman power was met with harsh punishments, often death. This was especially so in Judea, one of the most turbulent regions of the empire, where there were frequent, bloody revolts against the Roman occupation. Christ was delivered to the Romans by the Jews (‘you are charged by the high priest and elders’ (Matth. 27, 13) because he ‘made himself a king’ (Jn. 19, 13),  and ‘anyone who makes himself a king is going against Caesar’ (Jn. 19, 13). The Roman governor was alarmed by their demands that Christ be put to death on this account and he signed the death warrant. 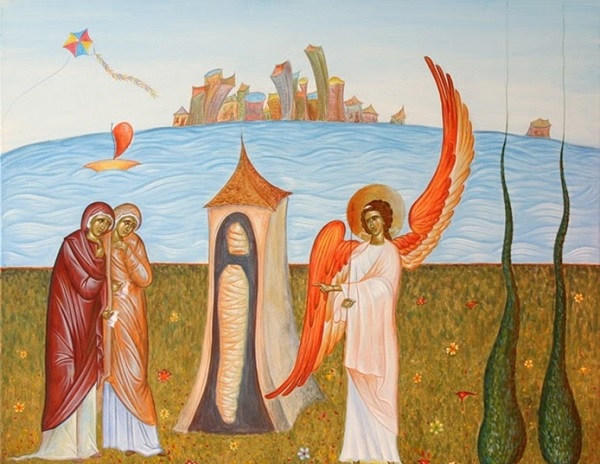 It was also risky for any Jewish people to take care of Christ’s body and bury it with honors, because the Jews had arrested Jesus as a ‘blasphemer’ (Matth. 26, 55), having ‘made himself the son of God’ (Jn. 19, 7). Mosaic law was strict in cases of impiety and blasphemy towards God and stipulated severe penalties. The blasphemer was stigmatized by Jewish society, as were those who associated with him.

Those who sought the body of Christ were not unimportant people, but prominent members of Jewish society, well-known figures, members of the Sanhedrin, government leaders who, by this action of theirs, risked not only their position and standing, but their very lives. Joseph from Arimathea ‘being a member of the council and a good and just man’ (Luke 23, 50), ‘boldly went to Pilate and requested the body of Christ’ (Mark 15, 44), in order to bury it with honors and not have it thrown out onto a dung-hill, as was the custom with the bodies of criminals. The word ‘boldly’ shows the heroic courage of the saint, this man who was devoted to Christ. Alongside him was another, good, leader of the Jews, Nicodemus, also a member of the council who had earlier come to Jesus at night (Jn. 19, 39) and had been a secret disciple of his. Ignoring the risk of being charged by the fanatical Jews with aiding and abetting the ‘dangerous revolutionary and blasphemer of God’ according to the charges brought against him, these respected and heroic men buried Christ with all due honor. The two secret disciples of Christ publicly carried out their exalted mission.

Also present and prominent at the burial of the Lord’s godly body were the holy myrrh-bearing women, apart from the Mother of God, ‘among whom were Mary Magdalene, Mary the mother of James and Joseph, and the mother of the sons of Zebedee’ (Matth. 27, 56). Unlike  the eleven male disciples of the Lord, who, ‘for fear of the Jews’, abandoned him and hid (Jn. 19, 38), this blessed company of holy female disciples of Christ stood by him fearlessly, mourned him and buried him with the honors he deserved.

But they weren’t convinced that they’d done enough for him. Because of the feast of the Passover his hasty burial hadn’t allowed them to take care of his immaculate body as they would have wished. Not content with anointing his holy body before the burial, they wanted to anoint it afterwards, also. With no thought to the dangers and the insuperable difficulties, ‘after the Sabbath, at dawn on the first day of the week’ (Matth. 28, 1) they ‘bought spices so that they might go to anoint Jesus’ body’ (Mark 16, 1).

Pained and saddened at his unjust death, they were walking to the tomb where their master was lying, all the while tormented by the thought of who could possibly roll away the stone from the opening of the tomb (Mark 16, 3). The stone which had been rolled into the entrance was very large, an unsurmountable obstacle to them entering and carrying out their noble desire.

When they arrived at the tomb, a great surprise awaited them: they saw that the rock had been rolled away from the entrance and that the angel of the Resurrection was sitting on it. He announced to them the glad tidings that Jesus the Nazarene ‘has risen, he is not here, behold the place where they laid him’ (Mark 16, 6). They had gone in order to deal with a corpse and instead discovered that he’d risen. 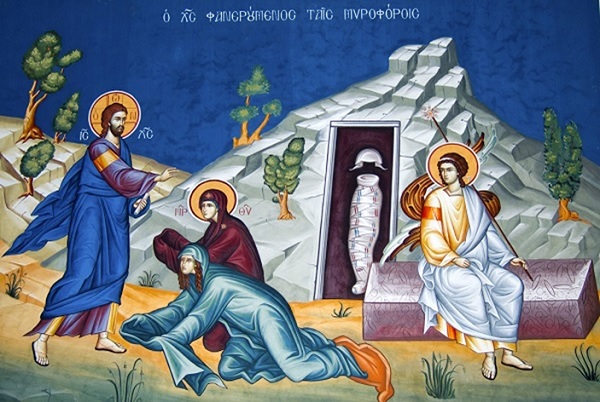 Because of their heroism and selfless devotion to the Lord, they were accorded the supreme reward: they were deemed worthy of being the first witnesses of the Resurrection.  These wonderful, humble, women, looked down on in a male-dominated society, were also the first to announce the Resurrection.

Female nature, which for centuries had been disparaged, regained its true worth. For the first time in history, we have here the recognition, in practice, of women as being equal to men. For the first time, their testimony was admissible, because until then it was not accepted even in a court of law. And what a testimony! The greatest of all time: the salvation of the human race and the whole world. The Resurrection of Christ and the resurrection of all of us with him.

With the respect paid to these holy women who were devoted to the Lord, we honor female nature, which our first mother, Eve, had discredited with her disobedience, resulting in her female descendants being completely marginalized by men. But then Christ came, who did away with all the compartmentalization which divided people and, at the same time removed the stigma from women, bringing them back to being regarded as fully human. Through Christ, women regained their lost honor and became genuinely respected in our Church, not as they are in secular pseudo-feminism. The holy myrrh-bearers were blessed in experiencing the first, true feminism, through which women gained the position that they really deserve. A feminism entirely different from that of today, which, instead of liberating women, makes them prey to sinful passions.

This teaching was later formulated by Saint Paul: ‘there is no male or female’ (Gal. 3, 28). All of us who have been baptized in Christ are one body, the Body of Christ. If women enjoy rights today, they owe this to the saving message of Christ. The holy and heroic myrrh-bearing women made a start. The Sunday of the myrrh-bearers ought to have been the pre-eminent Women’s Day.