Ascension a rather less well-known feast of the Lord

It’s a feast which, because it always falls on a working day, doesn’t occupy the same place in popular awareness as the great feasts of Christmas, Theophany, the Resurrection and Pentecost. Something similar is also true of the feast of the Transfiguration.

At the feast of the Ascension, moreover, teenagers attending school are permanently absent, given that it comes at a time when examinations are being held and so it’s impossible for even the best-intentioned of teachers to take their students to church. So the children grow up, then go out to earn a living and whole decades may pass without them having the opportunity to enjoy this great feast and to experience the associated services. 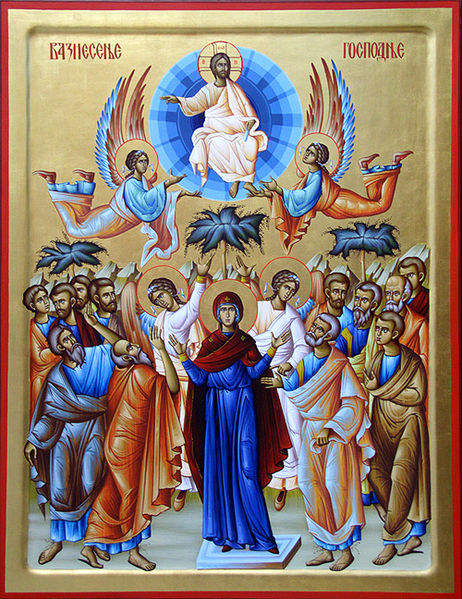 Ascension follows the Resurrection. It’s immediately after the forty days of the Lord appearing to his disciples. In those forty days, through constant appearances and disappearances, Christ, on the one hand proved the truth of his resurrection and, on the other, accustomed them to his continuous bodily absence. The disciples had to be weaned off their constant awareness of Christ’s bodily and psychological presence. They had to learn that they wouldn’t be enjoying the sight, sound and touch of him. They had to stop having tangible ‘documentation’ of Christ’s presence. The incarnate presence of Christ, which began with his birth, ends here. Or, rather, it ceases, but will be continued at his second coming. Then the mystery of the incarnation will again be revealed: ‘Then will appear the sign of the Son of Man in heaven. And then all the peoples of the earth will see the Son of Man coming on the clouds of heaven, with power and great glory (Matth. 24, 30). Until then, the faithful learn to live with the enduring, invisible presence of Christ.

‘Behold, I am with you until the end of the age. Amen’ (Matth. 28, 20. Christ is with us. All the time, though invisibly. The faithful draw strength from this presence of Christ, but continue to miss him and look forward impatiently to the second incarnate presence of the Lord. This is why the Church will continue to cry until then: ‘Come, Lord Jesus’. And Christ’s answer will continuously be heard: ‘Yes, I am coming swiftly’ (Rev. 22, 20).

So, Christ was lifted up into the heavens. He took his human nature, which he united without separation, without confusion, without change and without division,  according to the teaching of the 4th Ecumenical Synod, and elevated it above the cherubim and seraphim, angels and archangels, next to the throne of God the Father.

There are an infinite number of icons and magnificent expressions from prophets and hymnographers of the Church which praise, exalt and extol this wonderful event, As King David the prophet said: ‘God has ascended amid shouts of joy, the Lord amid the sound of trumpets’; and ‘Lift up your gates, you princes, be lifted up you everlasting doors, and the king of glory shall enter’.

Behind these poetic, magnificent, and so human expressions lies one essential fact, one wonder of wonders, one ‘new thing under the sun’, as the book of Ecclesiastes puts it in the Old Testament in the Bible: the union of divine and human nature. This union, which is so important for our salvation, nevertheless had a ‘negative side’ with the withdrawal of Christ’s human presence into invisibility and mystery until his second coming. It’s something that people rebel against, given that we’re governed by our flesh, and live and experience things largely through its presence and energies. We want the body of Jesus to exist. We want to see it, touch it, feel it, embrace it, seize the grace which is nestled within it, as did the woman with the issue of blood.  This is why, as we mentioned above, we cry ‘Come Lord Jesus’.

But be careful. The bodily presence of Christ isn’t completely absent. It exists and will continue to do so until ‘the ends of the ages’. But where is this bodily presence? In the sacrament of the Divine Eucharist. In the form of the bread and wine which, at ‘Yours of your own’, become the body and blood of Christ. The faithful are thus enabled not only to see, to touch, to feel the body of Christ, but even to eat it. To take it inside themselves. To allow it to penetrate the very depths of their existence and thus to make them glorified.

It transpires, then, that the bodily presence of Christ isn’t absent. Simply, if we’re to enjoy it, we must frequent the courts of our Lord. To partake in the preeminent sacrament of our Church, the sacrament for which all the others exist, the sacrament of the Divine Eucharist. When we do so in awareness and repentance, then what Saint Paul says will be true of us also: ‘After that, we who are still alive and are left will be caught up together with them in the clouds to meet the Lord in the air. And so we will be with the Lord forever’.