John, the ‘doer’ of the word

‘The rays of the new grace shone brightly today at your birthday’ sings the hymnographer in the canon of the feast of the glorious and honorable Forerunner. Indeed, the whole Church gladly participates in this, because the ‘joyful birthday’ of the saint ‘reveals the future joy and exultation and therefore the whole of creation rejoices’.

So the birth of the Forerunner is a harbinger of the birth of ‘the future joy’ for the world. His own coming into the world, which ‘lightened the dawn of Christ’ was a precursor of ‘the new grace’.

Indeed, John is the lamp of the light, the Morning Star of the spiritual Sun, the bright star that dispels the pall of delusion and the darkness, and opens the path to the truth of Christ. John is, in fact, called the ‘star of stars’ (doxastiko, Lauds), since his brightness outshines the light from all the other stars. He’s the most lambent star who lights the way for the dawning of the ‘Dayspring from on high’. 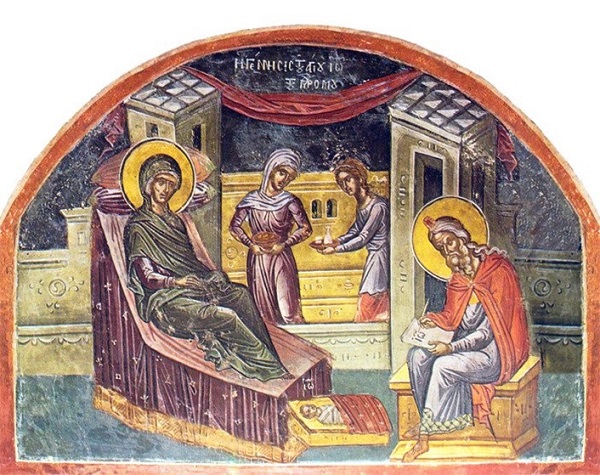 It would therefore have been impossible for our Church not to accord special honor to the birth of him through whom the coming of the Savior was foretold to the world (Dismissal Hymn of the Saint). Nor would it have been possible for the mouths of the evangelists and hymnographers not to emphasize the many wonderous events which took place at the birth of the Forerunner, which, indeed, invite comparison with similar ones at the nativity of Christ.

‘Oh, strange wonder’. One of the many wondrous events took place when Zachariah was praying in the temple and addressing to God his supplication for the salvation of all the people. An angel of the Lord appeared and told him that his prayer had been heard and that Elizabeth would give birth to a son, as if the birth of John was to be the salvation of the world, which is what Zachariah had been praying for at that moment. And wouldn’t John become the preacher of the salvation that would come to the world through Christ the Savior?

And we can see other correlations between the births of the two. Christ was born of the Virgin Mary, John of barren Elizabeth. The name ‘Jesus’, was given by the angel Gabriel, ‘before he was conceived in the womb (Luke 2, 21). In the same way, the name ‘John’, meaning ‘God’s grace’,  was also foretold (Luke 1, 32). Zachariah was also told that his son would ‘be great before the Lord’ (Luke 1, 15). At the birth of Christ, the angel Gabriel didn’t announce only ‘Hail’, to the future Mother of God, but he also passed on to the shepherds and to all others the ‘tidings of great joy, which is for all the people, that the savior was born’ (Luke, 2, 10-11). By the same token, at the birth of John, the angel said to Zachariah: ‘And he will be a joy and delight to you. and many will rejoice because of his birth’. At the birth of Christ the angels hymned the most high God (‘Glory to God in the highest…’); at the birth of John people wondered: ‘What then is this child going to be?’.

And the most miraculous thing of all: the meeting of the two, the Forerunner and Christ, in the womb of their mothers before they were even born. When Elizabeth and Mary embraced, ‘the child leapt in the womb of Elizabeth’, as if the disciple was recognizing his Teacher, ‘the servant’ his ‘Master’. You see, John had the gift of foresight from the time of his gestation, since ‘he was filled with the Holy Spirit even from his mother’s womb’ (Luke 1, 15).  And he was able to transfer his grace to his mother, enabling her to call Mary ‘the mother of the Lord’: ‘blessed are you among women and blessed is the fruit of your womb; but why has this happened to me, that the mother of my Lord should come to me?’ (Luke 1, 43). How else would Elizabeth recognize Mary as the mother of the Lord, if not through her son, John, who was holy ‘even from his mother’s womb’. (Of course, this particular passage is the most powerful proof of the view of our Church concerning life from the moment of conception).

From all the above, then, it’s clear that John proved to be ‘great in the Lord’ (Luke 1, 14), that is that he developed all the virtues to the highest degree and therefore pleased the Lord, who would later confess with admiration: ‘no-one has arisen among those born of women who is greater than John the Baptist’ (Matth. 11, 11). It should be noted that John is the only person about whom the Lord spoke in such terms, and he did so before the Church as a whole honored him as ‘superior’ to all the saints.

And yet, John became great not only because it was God’s will, nor only because his parents were devout, blameless and righteous (Luke 1, 6), but mainly because he himself chose to live ‘a sober, godly and upright life’ (Titus 2, 12). In fact, John is the epitome of the triptych of the Christian life: he observed the true faith, without deviating from it; he lived a moral life; and he acted honorably and righteously. Indeed, he was so righteous that he wanted, through his preaching, to put not only the ordinary citizens on the strait and narrow path but also the leaders of his time, chastising them for their impiety and immoral life-style. In the end, this cost him his life.

So, since most Christians today are only hearers of the word of the Lord rather than doers of it (James1, 22), it’s time for us to learn from John’s example and to apply the word in all aspects of our life. We must keep the true faith intact, given that it’s under attack on all sides; we must live morally and virtuously, despite the many and varied challenges and provocations; and we must conduct ourselves with love, sagacity and righteousness. And, above all we must unite and work together to combat every movement aimed at dividing and deluding us.

This is the only way that we, like the Forerunner and all the saints, can live ‘a sober, godly and upright life’. To this end, let us pray to the Lord to grant us his abundant grace and boundless mercy, through the intercessions of Saint John. Amen.