Do you see this common feast and gladness which our Lord, Jesus Christ has given to the faithful with his resurrection and ascension? It arose from sorrow.

Do you see this life, or rather this immortality? It was made manifest to us from death.

Do you see the heavenly heights to which the Lord rose at his ascension and the greatly glorified glory with which he was glorified in the flesh? He achieved this through humility and lack of glory. As Saint Paul says of him: ‘And being found in appearance as a man, he humbled himself  by becoming obedient to death- even death on a cross! Therefore God exalted him to the highest place and gave him the name that is above every name, that at the name of Jesus every knee should bow, in heaven and on earth and under the earth, and every tongue acknowledge that Jesus Christ is Lord, to the glory of God the Father’ (Phil.2, 8-11). 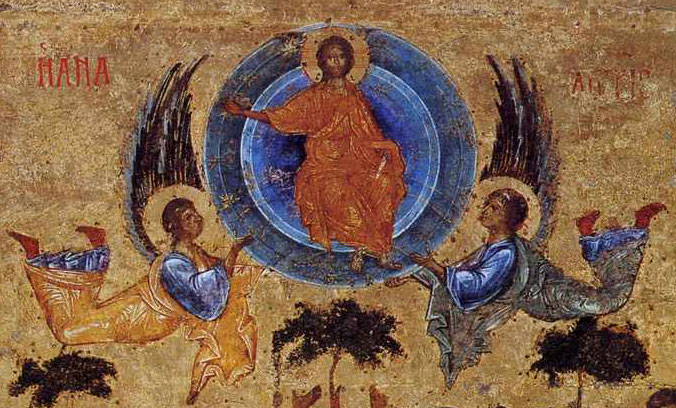 So, if God elevated Christ to such heights because he was humbled, dishonored, tormented, and if he suffered a shameful death on the cross for our sake, how will he save, glorify and elevate us if we don’t chose humility, if we don’t show love to our neighbors, if we don’t take back our soul through resistance to temptations, if we don’t follow the narrow path and gate which lead to eternal life? If we don’t follow him who guides us to our salvation: ‘To this you were called, because Christ suffered for you, leaving you an example, that you should follow in his steps (1 Peter, 2, 21).

The hypostasized Wisdom of the Father on high, the pre-eternal Word, who out of his love for humankind became united to us and dwelt among us, has presented us with a feast which is vastly superior to this outstanding honor. Because we celebrate the transition of our nature which was in him, not from below the earth to the surface, but from the earth to the heaven of heavens,  and beyond that to the throne of the Lord of all.

On that day, the Lord didn’t merely stand in the midst of his disciples, as he did after the resurrection, but he departed from them, and, while they were looking at him, ascended into heaven and entered the true holy of holies. ‘He seated him at his right hand in the heavenly realms, far above all rule and authority, power and dominion, and every name that is invoked, not only in the present age but also in the one to come (Eph. 1, 20).

So why did he stand in their midst and then accompany them further. He led them out as far as Bethany, raised his hands and blessed them (Luke 24, 50). He did so in order to show that he was safe and sound, to show that he was healthy and could walk steadily, even though his feet and hands had been nailed to the cross and his side had been pierced, as the marks of the wound indicated. All this to prove his saving passion.

I, in fact, think that the fact that ‘he stood in the midst of his disciples’ shows that they were strengthened in their faith in him, with this appearance and blessing. Because he didn’t just stand in the midst of all of them, but stood in the heart of each one of them, since, from that time, the Lord’s apostles became steadfast and resolute.

So he stood among them and said ‘Peace be with you’, his usual sweet and significant greeting. This is a double peace: towards God, which is the product of due reverence; and among ourselves as people. When he saw that they were frightened and disconcerted by this unexpected and strange appearance- because they thought they were seeing a spirit or a ghost- he mentioned the doubts they had in their hearts. He showed them that it was really he himself, and encouraged them to prove it for themselves by examining and touching him. He asked for something to eat, not because he needed it, but to confirm his resurrection.

He ate a portion of grilled fish and some honey from a honeycomb, and these are symbols of his mystery. In other words, the Word of God, in his hypostasis, united to himself our nature which had been floundering in the waters of the hedonistic life of the passions and he cleansed it through the unapproachable fire of his divinity. And our nature resembles a honeycomb in that it contains the treasure of reason embodied in the flesh, as honey is in the comb. He gladly partakes of these because he makes his food the salvation of each person who shares our nature. He didn’t eat the whole comb, but only part of it, because not everyone believed. And he didn’t eat it alone. He ate what was brought to him by his disciples, because they bring him only those who believe, separating them from unbelievers.

He then recalled the words he spoke to them before his passion, all of which had come to pass. He promised to send the Holy Spirit to them and told them to stay in Jerusalem until they received power from on high. After this discussion, he led them out of the house as far as Bethany and having blessed them, as we’ve said, he departed from them and was lifted up into the heavens. Using clouds as his chariot,  he rose up gloriously into the heavens, to the right hand of the majesty the Father, seating our leaven [nature, composition] on the same throne.

As the apostles continued to gaze at the heavens, the angels were charged with informing them  that he would also return in this way and that all the races of the earth would see him on the clouds of heaven. After the disciples had worshipped on the Mount of Olives, from which Christ had ascended, they returned to Jerusalem, praising and blessing God and awaiting the descent of the Holy Spirit.

Just as he lived, died, rose and ascended, so shall we all live, die and rise. But not all of us will ascend, only those for whom Christ is life and death is a gain; only those who, before their death, crucified sin through repentance. Only these will be caught up together with them in the clouds to meet the Lord in the air (1 Thess. 4, 17).

Let us enter our upper room, praying in our minds. Let us cleanse ourselves to receive the descent of the Comforter [Advocate] and let us bow down before the Father, Son and Holy Spirit, now and ever and unto the ages of ages. Amen.