One of the main characteristics of people today is caution, hesitation, a fear of taking decisions. And this, of course, isn’t because they have no confidence in themselves. On the contrary, the individualists of the 21st century think the world of themselves. They may not admit it, but in essence they’ve deified themselves.

So why do they hesitate? Why don’t they decide, but prefer to follow the way things unfold? Out of fear. Out of fear of missing out on an even better opportunity than the one that’s before them at that particular moment. They hesitate and don’t decide in case they miss something preferable which might crop up, or which they haven’t yet identified. The range of choices offered today is close to infinite. For perhaps the first time in history, human freedom, our right to choose, is not fenced about with restrictions, but with an abundance of choices which ‘block’ any decision-making. 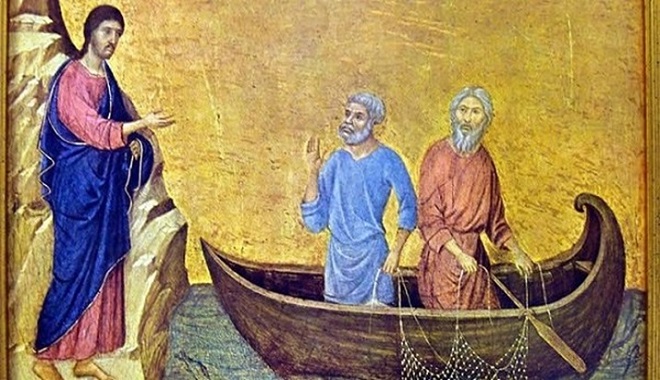 What happens when people don’t take decisions- because they hesitate, they lack resolve, or they aren’t able? The time of their life passes, opportunities are lost and the people themselves ‘wallow’. They sink into the mire of stagnation and that’s the worst thing that can happen, especially for the spiritual life. Too fearful to decide, they essentially fear taking the responsibility which is the concomitant of any decision, and so they vacillate, with the result that they don’t take part even in their own life. In the end they passively take whatever comes and goes and end up as mere spectators of history, when, in fact, they were made to play a leading role.

The preparation of the workers of the Gospel

Today’s Gospel reading presents an episode from the long period of the preparation of the workers of the Gospel. It describes the call of the first disciples and the manner in which they responded. It focuses, however, on the answer the disciples gave to Christ when he called upon them to follow him, and says nothing about what had passed earlier. And what that was isn’t told us by the Gospel of Saint Matthew, from which today’s reading is taken, but by the Gospel of Saint John. This demonstrates that, although all four Gospels were written in different places, without the authors having any means of communication, they don’t contradict, but rather complement each other. Each evangelist used his own personal style and was addressing a different circle of readers and therefore wrote to present a different side of the divine and human Jesus.

What had happened previously, which wasn’t covered by Saint Matthew, but which is mentioned by Saint John? After Christ was baptized by John the Forerunner, the latter discreetly encouraged his own disciples to associate with Christ. So he indicated to Andrew and John that they should leave him and turn to Christ. They approached him and asked him the famous question: ‘Teacher, where are you staying?’, to which they received the answer that foxes and the birds of the air have their nests, but Christ himself had nowhere ‘to lay his head’. This reply was given to show from the outset that life with Christ wouldn’t be easy for the disciples, but would be arduous and dangerous. Essentially a proposal was made and the difficulties involved were underlined. All of this occurred with such sincerity and respect for human freedom that there’s not even a hint of any manipulation of the disciples, nor any attempt to ‘win them over’.

What happened thereafter? The disciples returned to their homes. They went about their business. They worked to make a living. At the same time, all of what had happened was maturing in their soul. They weighed it up, measured it, thought about it. The desire grew stronger, not in an emotional and superficial manner, but systematically and consciously. The seed had fallen into the field of their soul and was waiting for the time to sprout. In other words, the groundwork had been laid for when the moment was opportune.

And the right moment arrived when Christ called them. On the first occasion, he didn’t send them away but neither did he keep them with him. He gave them time to think at their leisure, so that they could make a mature decision. Now he himself sought them out and invited them directly. And they responded directly. They showed no superficial zeal or  shallow enthusiasm, but faith and obedience. On hearing the Teacher’s invitation, they didn’t hesitate or delay, but, having been ready for some time, allowed what had been burgeoning and maturing in their hearts to express itself and bloom. And with unprecedented resolve, they abandoned everything to become ‘fishers of men’.

The outcome of any decision depends on the preparation made for taking it, on the maturity of the thought process behind it, and on the tenacity with which it’s implemented. Christ’s method of laying the foundations for a sound decision on the part of his disciples is the same method used by the Church in its call to each person to take the decision to lead a conscious spiritual life. Acquaintance with Christ can’t be marked by shallowness or reservations. Christ requires awareness, maturity and steadfastness in our decision to follow him.