Information about the story of Peter after the Resurrection is scant and we have no real sketch of the course of his life and no fixed point to use for satisfactory dates. In the history of the Early Church, Peter again played a leading role in the first action of an administrative nature by the Apostles, when he recommended to a common assembly of the faithful that they should elect a replacement for Judas Iscariot. 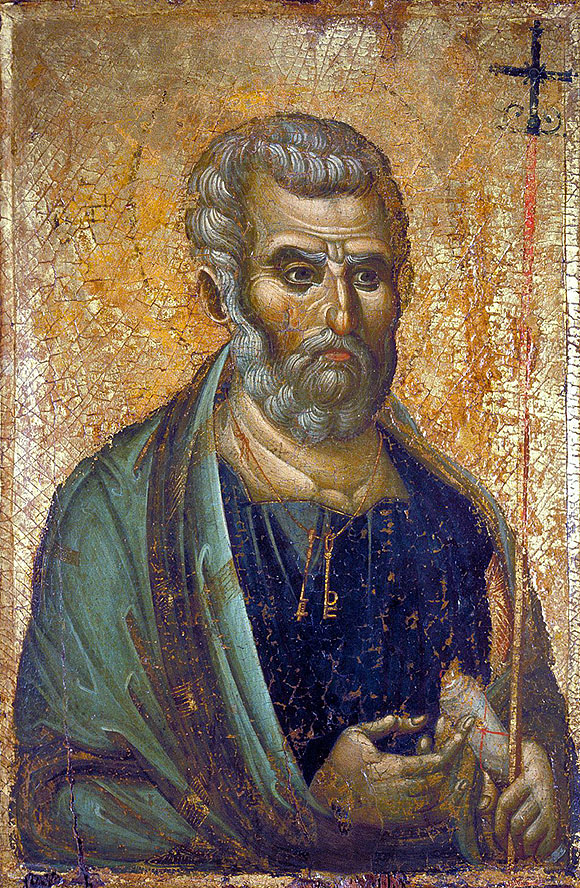 On the day of Pentecost, Peter stood with the other disciples and spoke to the assembled crowds with such boldness and eloquence that 3,000 were baptized.

Thereafter, when he was in the temple with John, he healed a man who’d been lame from birth and spoke to the crowds for a second time. As a result of this, both he and John were taken to the Sanhedrin, where he spoke out and said that he couldn’t not speak about what he’d seen and heard.

The Jews, the Sadducees in particular, had him and John arrested a second time, but they were released in a miraculous manner.

All of this, and certain other events such as the death penalty imposed on Ananias and his wife Sappheira and the miracles Peter worked through his shadow, meant that his fame increased.

With Jerusalem as his base, Peter often went out on journeys and visited neighbouring Churches. Saint Paul twice went up to Jerusalem and met Peter, the apostle of circumcision as he called him, who, together with James, the Lord’s brother, and John, were considered pillars of the Church.

On one of his journeys, Peter cured the paralytic Aeneas in Lydda and, in Joppa, raised Tabitha (Dorkas). But there were always Christians in those areas already, so Peter wasn’t the first apostle to visit them. It appears that Peter achieved great things in Lydda and Sharon. Peter remained in Joppa for several days, then went by divine decree to Caesarea, when he instructed and baptized the centurion Cornelius and all his household.

When he returned to Jerusalem, he related what had happened with Cornelius, and answered the circumcised Christians who were unhappy that he had baptized Cornelius. Peter’s speech convinced them that God was not only for them, but for the whole world, since, as they now recognized, God also gave the Gentiles the chance to repent and gain true life.

In 42 or 44, when Herod Agrippa saw how pleased the Jews were that the Apostle James had been put to death, he arrested Peter and imprisoned him, with the aim of killing him, too. God saved him, however, in a miraculous manner and Peter slipped away to the house of Mary, the mother of Mark. From there he escaped and went to another location.

After that, Peter is mentioned two more times. The first is when he took part in the Apostolic Synod, in 49, in Jerusalem, where Peter, Paul, James, the Lord’s brother, and Barnabas played leading roles. At the synod, with his brief, eighth speech in Acts, Peter took a bold stand in favour of freedom for the Gentile Christians in relation to circumcision and the requirements of the Law, and supported the view that Gentile Christians were not obliged to conform to these, because the Gentiles, like the Jews, were saved solely through faith in Christ.

And the second time is when Peter had a meeting in Antioch with Paul, who rebuked him for a want of courage and for making too many concessions to the Judaizers, to the detriment of the Gentile Christians. The Christian community in Antioch was a relatively old one, having come into existence immediately after the stoning of Stephen and was made up of converted Gentiles. Peter arrived in Antioch with Mark, shortly after Paul and Barnabas had. Soon after, those Jewish Christians whom Paul mentions in Galatians arrived in Antioch. Peter remained in Antioch for the same period of time that Mark, Paul, Barnabas, Jude and Silas were there. Of these, only Jude left for Jerusalem.

Eusebius, who in this case uses Origen, reports that Peter preached the Gospel to the Jews of the diaspora in Pontus, Galatia, Bithynia, Cappadocia and Asia. This evidence is based on the prologue of Peter’s first Universal Epistle. However, Peter may have written without having preached. Silas, accompanying Paul, also preached in the area where the recipients of the epistle lived. So we may consider that Peter addressed these through the mediation of Silas.

It cannot be proved whether Peter went to Corinth, where there seems to have been a group of Christians who claimed to be his supporters. From Paul’s Epistles to the Corinthians and those that were written from there (Thessalonians and Romans), there’s no hint of Peter being there. Nor is anything like that mentioned in Acts. In any case, it would not have been possible for there to be any such event in Acts since it ends before Peter’s arrival in Rome, which also is not mentioned. So it could hardly refer to any possible visit to Corinth on the part of Peter while he was en route to Rome, as the Corinthian Dionysios mentions in his Epistle to the Church of Rome (170). In any case, the Lord’s “brothers” are also referred to in the same epistle, without it being accepted that they went to Corinth at all.

Peter’s preaching was largely restricted to Jews, and, in particular, to the region of Palestine, while Paul addressed the Jews of the diaspora and the Gentiles.

In his first Epistle (5, 13), Peter refers to “she who is in Babylon and likewise chosen” and some have conjectured that this refers to ancient Babylon or the city of the same name in Egypt, where he may have been active. But the most likely solution is that Peter meant Rome, where he was in 64 and where he was martyred on 13 October of the same year in Nero’s circus.

The Church of Rome claims that Peter was in Rome after his miraculous escape from prison in 42 or 44, and remained in the city as its first bishop until his death. But the first Bishop of Rome was Aenus, as is shown by the ancient list which was drawn up by Soter, the Bishop of Rome, (166-74). The Apostle Paul, who, because he didn’t wish to build “on foreign foundations”, was in the habit of preaching in places where the name of Christ had not yet been heard, confesses that he wanted to preach in Rome. This means that, until the time he writes to the Romans (56), no Apostle had yet been to Rome. There had been Christians in Rome from even before the edict of Claudius in 50. Christianity appeared here through unidentified Christians some of whom had heard Peter in Jerusalem on the day of Pentecost (“Romans staying in the city, Jews and proselytes”), and through others who had heard Paul in the various places he had preached. This explains why Paul, in chapter 16 of the Epistle to the Romans, sends greetings to the faithful in a city where he had not yet preached and yet who were known to and associated with him.

In any case, the constant movement to and from Rome of people from the Eastern provinces with personal or commercial business there, and of Romans to the Eastern provinces, contributed to the presence of a Christian community in Rome from early on. In the spring of 64, Peter wrote his two Universal Epistles.