Once upon a time I thought that if a person saw a saint, they’d immediately be astonished, as I was when I saw a man of God. One example would be Elder [now Saint] Païsios with whom we were in close contact for so many years. People would go to him and would change just at the sight of him, without him saying anything at all to them. Others went, though, and he’d try to convince them and it made no difference at all. In fact quite a lot were scandalized and left, calling him various unpleasant names, claiming he was a wizard or a fakir or that he’d been to India to learn Hindu techniques. Each of them understood the man in his own way because each took whatever he already had inside him. On the other hand, you’d see people with mature souls who were estranged from the Church but had a receptiveness and purity. They really understood that the grace of God dwelt in the Elder. The same was true of Christ. When he once asked his disciples what people said of him, he put them in a difficult position and they didn’t report that there were some who thought he was possessed, that he was a wizard, a drunkard and a swindler. But they also said that some said he was Jeremiah, or Elijah, or some other prophet and that they held him in the highest regard. He then asked what they themselves thought of him. Peter immediately answered that they believed he was the son of the living God. Christ then told him he was blessed since hadn’t said this based on information from some other person, but because the Lord’s Father in heaven had told him. This was why Christ said he would build his Church on that rock, that is that confession, and that the powers of darkness would never prevail against it. 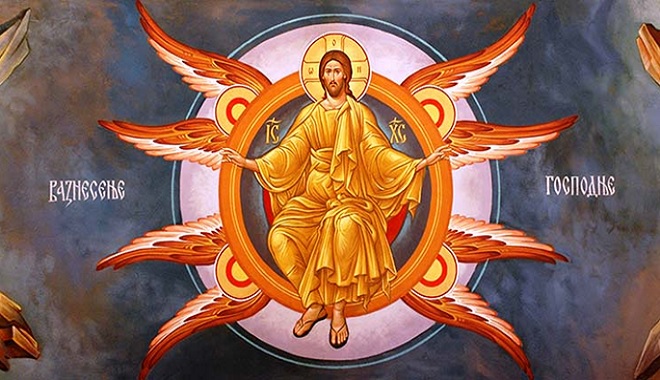 So we should know that, from the time when Christ appeared, suffered, was crucified, buried and rose for us, this has been going on in people’s souls. At the same time, the fact of the judgement by people around Christ also continues. This is the judgement of other people; in other words the view they have of the Lord. This view is the basis on which people are judged. This is what the judgment will be like: whether or not we accept Christ as God incarnate and our only Savior.

On the fortieth day after his Resurrection, the Lord departed this world in the body and ascended into heaven, where he sits at the right hand of the Father. Naturally, this isn’t a specific place. That’s to say, there isn’t a seat next to the Father which Christ is sitting on. Nor is heaven a geographical region; it’s the realm where God is. Things were expressed in these terms so that we could understand that Christ departed and took with him our human nature when he ascended given that he was both God and human. As God, he was always with the Father and was never separated from him even for a moment. Both when he was on earth and when he was in Hades as God, as God he had the Father with him. The fact that he also took human nature with him is precisely the result of all that preceded: the passion, the cross, the grave and the resurrection. Christ’s human nature ascended with him, and with it ascended the whole of deified human nature. So this event of the Ascension, of our deification, is something which has to do with the whole of the human person. It’s the glorification of the human body. This is what shows how greatly God has honored us. The notion that within the Church and its teachings the human body is disdained and all we talk about is the spirit and virtues is simply wrong.

Quite the opposite. It’s the Church and Orthodoxy which deal particularly with the glorification of the human body. Nowhere else do we even theoretically see the glorification of the human body as this is perceived in Orthodox theology. This is what Christ’s Ascension means. Nothing that Christ did was done for himself. Christ’s Ascension doesn’t just mean that Christ returned ‘home’ after his presence on earth. That isn’t the reason for the Ascension. The reason was to show us where we’re headed and where we’ll end, the point to which Christ has raised us. We should recall that before he suffered that night in Gethsemane, when he prayed to the Father, Christ prayed for us. He said: ‘Father, I desire that they also whom you gave me may be with me where I am, that they may behold my glory, which you have given me’. In other words, Christ asked his Father that throughout the centuries, in his endless reign, we should be precisely where he is. And where is Christ? In the glory of God the Father, as his Father’s equal. This position belongs to him by nature, but it’s granted to us by grace. We know that, if Christ is on the right hand of the Father, then so are we, beholding and, by grace, participating in this glory and the deification of our human hypostasis.

These are certainly not easy things to grasp, but they have tremendous significance for our everyday life. I remember once there was a young man who had a particular sin of the flesh, which was chronic and of great distress to him. He couldn’t control it at all. If he tried, he again fell immediately and the whole story was repeated for years on end. He went to many confessors and they all tried to tell him this wasn’t right and each of them tried their best to help him. But the sin continued. Naturally, it’s not just the matter of the sin, which can be removed through repentance and humility. It’s also the fact that sin is a sickness that eats away at people’s souls. This was the case with this young man. Lots of people invoked various arguments from doctors, philosophers, psychologists and psychiatrists that this sin is harmful for people. In my time (and perhaps they’re still in circulation), there were books that stated that a sin and events associated with it damage the eyes, the brain and so on. They tried to make people avoid something, not because it was a sin and disrupted their relationship with Christ, but because there are consequences for their health and their life. Just as some people support fasting by saying that it reduces cholesterol and other ailments. They make a medical analysis, as if the Fathers were dieticians. But we’d still fast, even if this resulted in higher levels of cholesterol or triglycerides. This isn’t the reason why we fast.