‘You who fill all things ascended in glory…’ 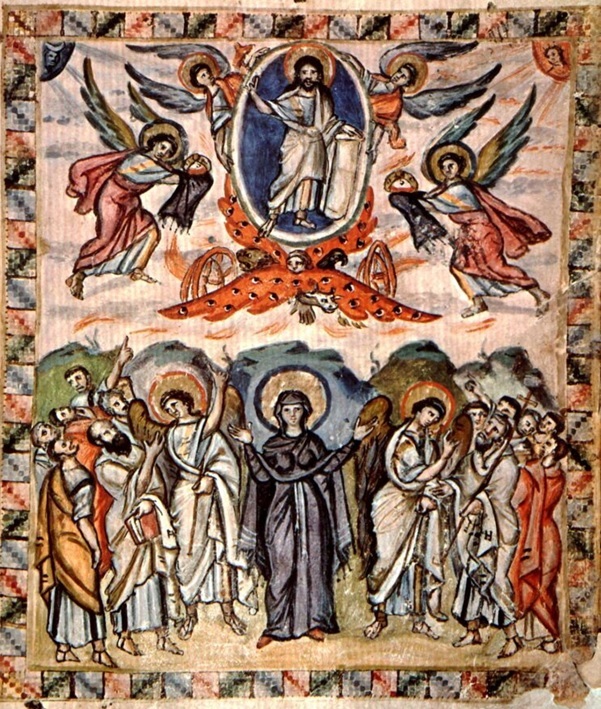 The Lord’s glorious ascent had been foretold prophetically by King David in his psalms ‘God has ascended amid shouts of joy, the Lord amid the sound of trumpets’ (46, 6). After his glorious victory over  death and the devil, the Lord ascended into the heavens in the midst of  shouts of joy and exultation on the part of the angelic powers, who hymned and glorified him. In his comment on this verse, Saint John Chrysostom observes: ‘he [David] did not say “was taken up”, but “ascended”, indicating that he was not led up by another, but that he made his own way’. The joy and jubilation of the angels over the Lord’s glorious ascension is expressed more clearly by David in another psalm: ‘Lift up your gates, you princes, be lifted up you everlasting doors, and the king of glory shall enter’. (26, 7-8). As Saint Athanasios interprets this verse, the angels on earth, who had been serving the Lord, urged those on high, as he was ascending, to open the heavenly portals so that the king of glory could enter. Thereafter, the angels in heaven, ‘astonished at the strangeness of the dispensation’, asked who this king of glory was. The angels on earth answered that he was no ordinary prince but the almighty, all-powerful God, who had achieved a glorious victory in the war against his enemies, that is, the devil and death. Speaking of this ascent, Saint Paul, in his interpretation of the verse in the psalms ‘you have ascended on high; you have led captivity captive’ (67, 19) says: ‘When he ascended on high, he led captivity captive and gave gifts to people’ (Eph 4, 8). When Jesus ascended, at his ascension into the heavens, he bound his enemies captive, these being Satan and death. He also gave gifts to people, that is, the Holy Spirit on the day of Pentecost.

Our Lord, as God, as the Word without beginning and the only-begotten Son, consubstantial with the Father, was always jointly enthroned and jointly honored with him, even before he became an incarnate human person. And even when he became incarnate, he wasn’t separated from in any way from the Father. As the hymnographer says: ‘the uncircumscribed Word was entirely with those below and with those above, in no way absent’. This was because ‘divine descent occurred, not a change of place’. He ascended and sat at the right hand of God the Father as eternal high priest and intermediary for all of us, as Saint Paul says in his epistle to the Hebrews: ‘We do have such a high priest, who sat down at the right hand of the throne of majesty in heaven’ (8, 1). And just as the high priests in the Old Testament entered the holy of holies on the day of atonement, with the blood of goats and calves, so our own true and great high priest, Jesus Christ, the ‘high priest of future blessings’ as Saint Paul call him, entered the real holy of holies, that is heaven, once and for all, not with the blood of goats and calves, which can’t erase sins, but with his own precious and all-holy blood which he shed on the cross for us. As Paul says in the same epistle: ‘For Christ did not enter a sanctuary made with human hands that was only a copy of the true one; he entered heaven itself, now to appear for us before the face of God’ (9, 24). Christ didn’t enter a holy of holies made by hand, which is a copy and imitation of the real holy of holies, but entered heaven itself, in order to present himself before the face of God and to intercede for us.

The Lord’s ascent into the heavens wasn’t only the glorification of his own human nature, however, but also of our own. Because, as Saint Paul tells us in his epistle to the Ephesians: ‘And God raised us up and seated us with him in the heavenly realms in Christ Jesus’ (2, 6). In other words, all of us who believe in him and who have become members of his body through holy baptism have been raised from the tombs of sin by his resurrection and have been placed on a seat beside him by his ascension. And this is very natural, because, since he was elevated and given that he’s the head of the body of the Church, it’s a concomitant that the body would also be raised. Since the head has been glorified, the body will also be. This will occur at the Second Coming, when, in the words of Saint Paul we shall all ‘be caught up together with them in the clouds to meet the Lord in the air, and so will be with the Lord forever’ (4, 17). This truth is also expressed by the hymnographer who wrote: ‘God has ascended amid shouts of joy, the Lord amid the sound of trumpets, in order to raise the fallen image of Adam’. And elsewhere he also says: ‘You descended from heaven and to earth and to those below under the guard of Hades. You raised with you Adam’s form and by your ascension into the heavens, Christ, brought it to the throne of your Father and set it beside him, for your are merciful and love humankind’.

The Lord’s ascension was a necessity. It was the necessary premise for the coming of the Comforter into the Church. Christ himself stressed this to his disciples shortly before his passion: ‘But very truly I tell you, it is for your good that I am going away. Unless I go away, the Comforter will not come to you; but if I go, I will send him to you (Jn, 16, 7). In other words, what first had to happen was his ascent to the Father so that he could intercede for us and so that he could send the Holy Spirit. Because the disciples were saddened at the prospect of being denied the presence of their beloved teacher, the Lord lost no time in telling them that they would be consoled by the advent of the Comforter, in whose presence they would also feel Christ himself within themselves.

If we realize the great compassion and rich love of our Lord, who suffered and was buried for us, who rose and ascended to heaven, we should raise our mind and our heart to the realms above, where Christ now is, seated at the right hand of the Father. ‘Leaving earthly things behind on earth, giving up the ashes to the dust, come let us raise our eyes and minds to the heights’. May this feast become an occasion of spiritual renewal and recovery, the occasion of our liberation from our passionate attachment to the pointless, transient and perishable things of this world. May it rather be an occasion for ceaseless thanksgiving and praise to the Lord. Amen.