Become imitators of us

At this time of the year, our Church celebrates the feast of the Apostles. It honors the chief among them, Peter and Paul, and then the whole group of the twelve. It hymns the preachers of the word who, like swift-winged birds, took the message of truth to the whole of the then known world. They were the shining luminaries who dispelled the darkness of delusion; they were the lyres of the spirit who brought harmony and love to people’s souls.

It’s really something to wonder at, how a handful of ordinary, ‘uneducated’ men with no power base was able to stand up to much larger numbers and, indeed, to great and mighty kings and governors. Besides, how did they manage, in objectively difficult and adverse conditions, not only to retain their own faith and purity, but also to lead others to the right path? 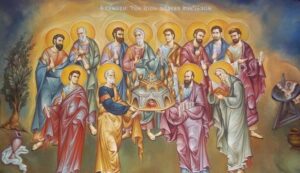 These ‘preachers who radiated God’ were truly admirable, because their mission was far from easy. Nor was it one-dimensional, but rather multi-faceted: spiritual, educational and social.

On the one hand, on the instructions of Christ to ‘go and make disciples of all the nations… teaching them to obey everything I have commanded you’ (Matth. 22, 19), they were called upon to spread the message of the Word to everyone (‘all the nations’) and to preach the whole of the truth. How were they to teach people, however, who until then had lived in the delusion of polytheism, and in the darkness of the idols, that God is one, that he ‘does not live in temples built by human hands. And he is not served by human hands’ (Acts 17, 24-25)? And, moreover, how were they to protect the ‘fulness of the truth’, which was always at risk of being revised by false brethren and false prophets (Matth. 7, 15)?

And it wasn’t only the spiritual mission. These same apostles were called upon to live upright and holy lives in a world that was corrupt and inhumane. They had to live like sheep among wolves (Matth. 10, 16). And yet they managed to succeed in this second mission, as well, which was to ignore the surrounding hostility and wickedness and to remain ‘as shrewd as snakes and as guileless as doves’ (ibid.).

Even more difficult, however, was the third mission: the practical implementation of the message of the truth. But here, too, the apostles proved to be really great men. Above all, in their own life they aligned words- the word of God- with deeds of love, thus becoming, in their turn, examples for others as regards how to live. This was in accordance with Saint Paul’s exhortation: ‘Become imitators of me as I am of Christ’ (1 Cor. 11, 1). How can you ask of others something that you’re not prepared to do yourself? So the apostles kept the true faith, really lived the life in Christ and became citizens of the just commonwealth of love, which he himself founded on earth, the ‘new commonwealth named after him’. All of us can be members of this community, provided we wish to be, that is, provided we also live on the basis of the principles of the right belief, right way of life and right conduct.

We’re told by the Acts of the Apostles (chapters 2 and 40) about the life of Christians in the communities of love. We can see that the unity of spirit among Christians in the community wasn’t restricted to matters of a spiritual or educational nature, but extended to economic matters as well, where there was fairness and honesty, so that the requirements of all the members were met ‘depending on the needs of each’ (Acts 4, 35). Indeed, to carry out this common task, and since the needs were steadily increasing, the community as a whole- not just the apostles- elected deacons to assist the apostles in the area of common service.

On the basis of their own community with Christ, then, the apostles thereafter founded the apostolic communities, to which they brought the message of love and in which they urged new citizens to live in the proper faith, living truly and conducting themselves with righteousness and peace. There was, in fact, an internal link and mutual support between the communities, as happened, for example, when other communities came to the assistance of the impoverished brethren in Jerusalem. (2 Cor. 8, 14; Gal. 2, 10; and elsewhere).

Unfortunately, this internal autonomy and spirit of mutual support which characterized the earliest Christian communities did not survive the following years, for many reasons, though this would require a separate study.

What is important, though, is that the apostles laid the foundations of these communities, which were true hives of Christian life and conduct, firmly on the corner-stone, Christ, with whom they remained permanently united despite their dispersal to all parts of the then known world. Besides, they weren’t preaching their own truths, but the unique Truth, which is a person, Christ. ‘I am the way, truth and life’, (John 14, 6). In this way they succeeded in their trifold mission: spiritual illumination, encouragement of education and social service. This was thanks to their unity with the Word of God, to the unity and cooperation between them; and, of course, it was also due to the contribution of the Holy Spirit, who guided their every step. We Christians today, therefore, baptized as we are in the name of the Holy Trinity and illumined by the Holy Spirit, have a duty to tread in the footsteps of the Apostles, to become in our turn minor apostles. This means that we must remain faithful to the truth of the ‘One, Holy, Catholic Church’. Through our genuinely Christian life and our just and cooperative conduct we must become shining examples for other people: ‘that they may see your good works and glorify your Father who is in heaven’ (Matth. 5, 16).

This is the only way we can really honor the apostles who call upon us, through the mouth of the chief among them, Saint Paul, to become imitators of them, in deeds, not only in words, (1 Cor. 11, 1), for the benefit of our own salvation and that of everyone. Amen.